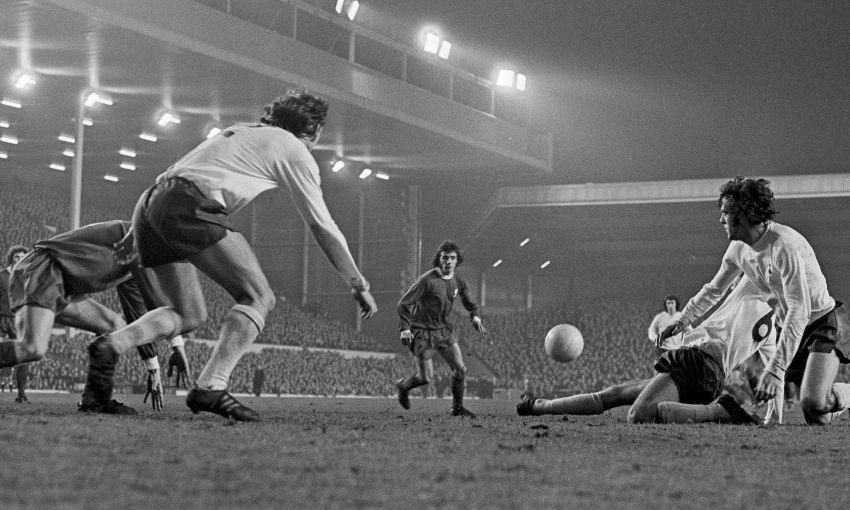 Ahead of Liverpool's clash with Manchester United this evening, we look back on the last all-English tie in UEFA Cup/Europa League competition – when Bill Shankly's side were drawn against Tottenham Hotspur in the semi-finals in 1973.

The road to the UEFA Cup final was to be a difficult one for the Reds, as they were up against a formidable Spurs side who were looking to keep hold of the trophy following their triumph the previous year.

The first leg of the much-anticipated tie was due to be played at Anfield on Tuesday April 10.

And the two teams had a dress rehearsal just 10 days prior to that opening game, where Bill Nicholson’s charges escaped from Merseyside with a point despite being dominated in the league fixture.

Liverpool were far superior against their London opposition that day and were only denied victory by the heroics of goalkeeper Pat Jennings.

The Northern Ireland international prevented the Reds from picking up a win by producing half-a-dozen stunning saves, including two penalties – the first from Kevin Keegan, before Tommy Smith’s spot-kick four minutes from time was also stopped.

In the warm-up to the UEFA Cup tie at Anfield, Keegan made light of the previous encounter by this time scoring a penalty to amuse the Kop ahead of kick-off.

But when the action got underway, there was serious business to be done. Shankly wanted his team to take a two-goal lead into the return fixture and in the 90 minutes his men did their utmost to try to deliver his wish.

When Alec Lindsay put the home side 1-0 up after 17 minutes, he might have thought they were well on their way to securing a healthy cushion.

But that was all Liverpool were to take to the capital as Tottenham survived an attacking onslaught from the Reds, who squandered a number of chances.

A well-poised White Hart Lane clash was therefore set up a fortnight later and Shankly’s men were high on confidence heading into the match, having sealed the league championship by beating Leeds United two days earlier.

Both teams were also well aware of who they would face in the final – should they reach it – after Borussia Mönchengladbach had convincingly taken down FC Twente in both legs.

Not resting on their laurels, the visitors started on the front foot and were in complete control of the opening 45 minutes in the second leg.

Yet despite having the greater share of possession and chances in front of goal, Martin Peters found the back of net four minutes after the interval to level the tie.

The game erupted after the deadlock had been broken and, six minutes later, Liverpool showed their determination to progress and put themselves back ahead on aggregate through Steve Heighway.

But in another twist, Peters then grabbed his second of the night with 18 minutes remaining to place Spurs level on aggregate.

However, they were still behind because of the away goals rule and the hosts threw everything at the Reds in an effort to grab the winning goal that would keep alive their hopes of holding onto the crown.

Despite a nervy ending, though, the newly-crowned champions displayed their grit and stood firm to deservedly reach the club’s second European final.

Spurs were gracious in defeat and double goalscorer Peters said: “If any side should stop us from winning the cup again, I would prefer it to be Liverpool. We are proud that we have beaten the new champions.”

Their manager added: “It hotted up in the second half and became exciting. It was a great tie and Liverpool are a great side.”

Meanwhile, Shankly was delighted with the display of his men and hoped his team would be on the winning side after the two-legged final.

He was quoted at the time as saying: “What a fantastic week this is and our boys really deserve this success.

“Before the goal they gave a tremendous exhibition. Then it blew up into flames and it was all hell’s fire at the end.

“For both teams to give that sort of display after each playing more than 60 games this season was unbelievable. Under this pressure, it is the equivalent of playing two seasons in Europe.

“I’m confident that we at Liverpool can win our first European prize and complete the championship-UEFA double.”

His confidence was well placed too – the Reds went on to achieve the double by beating the German outfit 3-2 on aggregate in the final to deliver the first of many European honours.