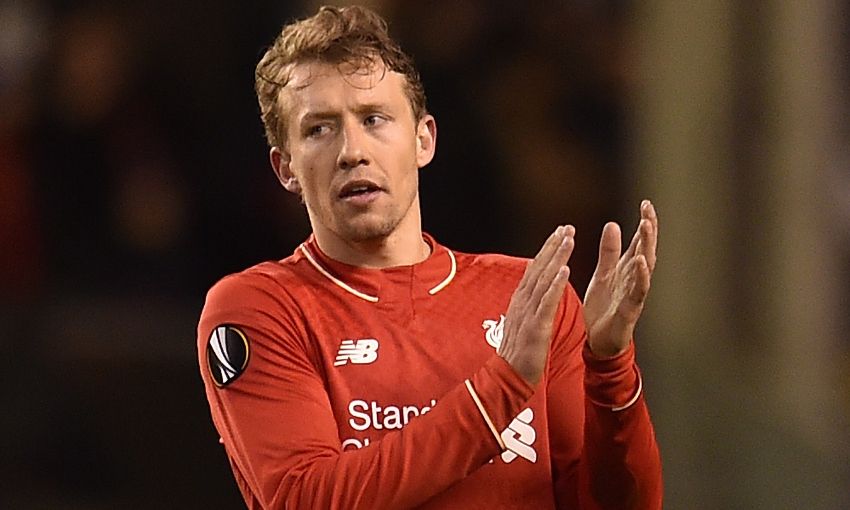 Lucas Leiva could be set for a spell on the sidelines after sustaining a muscle injury during Sunday’s Capital One Cup final, Jürgen Klopp today revealed.

The Brazilian picked up the problem when striking his penalty in the shootout defeat to Manchester City at Wembley and is now likely to miss Wednesday’s Anfield meeting with Manuel Pellegrini’s side.

Klopp told journalists at his pre-City press conference at Melwood: “We have to wait for a few things, but it doesn’t look too good with Lucas – he will not be available.

“He had problems with a muscle when he shot the penalty, so I think he is not available. We have to wait, but I don’t think so.”

Elsewhere on the fitness front, Klopp is awaiting a full medical assessment on the extent of the head injury Mamadou Sakho picked up in the accidental aerial clash with Emre Can that forced him from the field in the first half of the final.

The boss said: “With Mama, I don’t know exactly. We had to make a decision in the moment on the sidelines.

“I think it was the right decision but until now I have heard nothing about the real issue, so I have to wait for the final judgement of the Doc.”

Meanwhile, after Liverpool and City played out an intense 120 minutes of football at Wembley prior to the deciding penalty shootout, Klopp is anticipating changes being made to both starting line-ups when the sides go head-to-head once more on Wednesday.

The German will assess his squad in an evening training session at Melwood tonight before determining who’ll be deployed in the Anfield encounter.

“We don’t want to go and risk tomorrow, but who is available is available and then we have to make the choice,” Klopp explained.

“That’s the same as what we are doing. We don’t make changes to say, ‘Come on, it’s Man City, you can lose’ or that it’s more important how we play against Crystal Palace or something. We cannot do this and we won’t do this.

“It is all about who is fit enough to go into this really intensive game for both sides. We will pick the best line-up we can.”