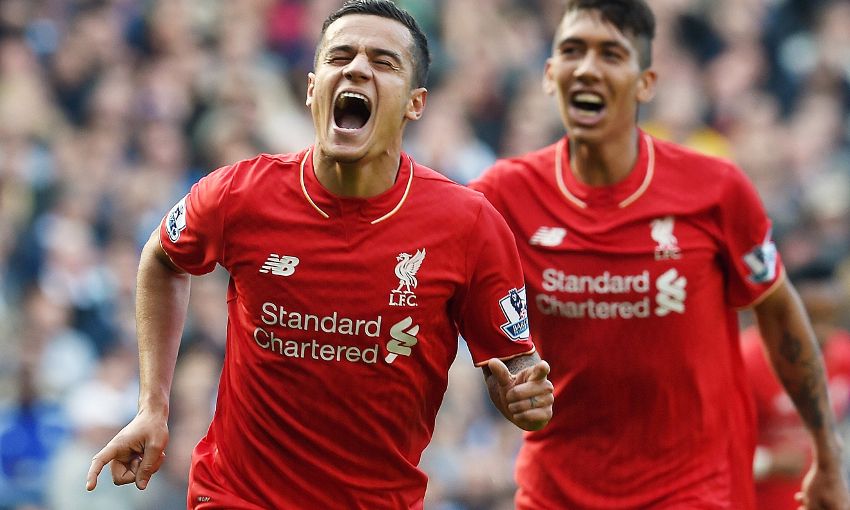 He has long been nicknamed 'the magician' by fans and teammates but Philippe Coutinho believes he can reveal even more of his talent under the guidance of Jürgen Klopp.

The Liverpool No.10 made a welcome return from a five-week injury absence during the FA Cup replay at West Ham United earlier this month and marked the occasion with a sublime, under-the-wall free-kick.

He followed that up with another inventive performance in the 6-0 rout at Aston Villa, laying on goals for Daniel Sturridge and Divock Origi as the Reds showed the best of their attacking potential.

With a chance to progress in the Europa League and a Capital One Cup final against Manchester City at Wembley ahead this week, Coutinho feels Klopp has his side on the right path for success.

“He created a highly successful side at Dortmund and it is great for Liverpool to have him,” the Brazil international told World Soccer magazine.

“In training, we are working hard and enjoying his methods, which are helping to make us better players. Little by little, it is translating to matches and I think everyone has seen how effective his philosophy can be if we adapt it in the right way.

“It feels like we are moving in the right direction under him and we believe we can fight for the big prizes and enjoy some special moments with the fans.

“Our team is playing a high-pressing game and I am enjoying it. With this style there is more freedom when we have the ball.

“We still have responsibilities within the team, but the manager is asking us to play our game more naturally and it is enabling us to express ourselves. Klopp has put his ideas forward and they are helping to make me an even better player.”

Coutinho is grateful to his previous coaches, too, for helping him to fulfil the potential that made Liverpool swoop for his services three years ago.

He added: “I have been lucky to work under some fine managers already in my career and they have each added an element to my game.

“The likes of [Rafael] Benitez, [Mauricio] Pochettino and Dunga are great coaches, but I will always have a special gratitude to Brendan [Rodgers]. He believed in me and brought me here. He gave me the opportunity to play for such a great club.”

The 23-year-old was joined by fellow Brazilian forward Roberto Firmino last summer when his compatriot completed a switch to Anfield from Hoffenheim.

Kopites have been treated to glimpses of a combination between the two – most notably as they inspired a 4-1 victory at City in the Barclays Premier League – and Coutinho expects more to come.

He said: “Our understanding is improving and I am learning more and more about the way he likes to play, as well as his movement off the ball. Hopefully that can be beneficial to both Liverpool and Brazil.

“He’s a great player who brings a lot of quality into the squad, but it is not just about two players and a partnership. The whole squad is working to improve as our main objective is to win trophies as a unit.”