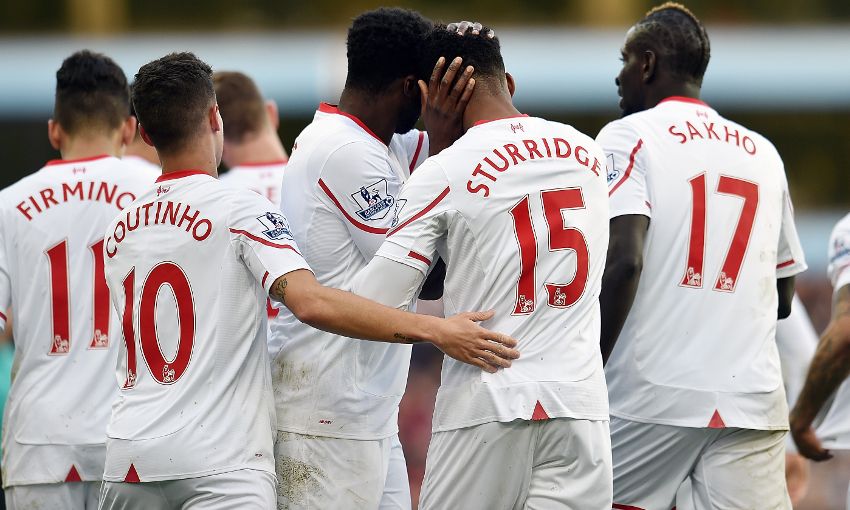 Liverpool were in irresistible form as they galloped to a resounding 6-0 victory over Aston Villa at Villa Park on Sunday afternoon.

It began when Daniel Sturridge needed just 16 minutes to make his mark on his first league start under Jürgen Klopp, netting clinically via his head from a Philippe Coutinho centre.

James Milner then grabbed a second for the visitors soon after when his in-swinging free-kick from the left evaded everyone in the box and found the corner of the goal.

Emre Can made it 3-0 just before the hour mark, collecting Roberto Firmino’s lay-off and arrowing an effort beyond Mark Bunn from the edge of the box.

Substitute Divock Origi and Nathaniel Clyne both converted within a two-minute spell shortly after, before Kolo Toure headed in from a corner to claim a sixth and put the seal on an afternoon to remember for the Reds in the Midlands.

The pre-match team news confirmed a start for Sturridge in attack for the first time since December 2. He was joined by Firmino and Coutinho, while in defence Toure partnered Mamadou Sakho as Klopp made nine changes to the side deployed at West Ham United in midweek.

The decision to field the trio was cause for excitement amongst supporters – and it ultimately paid dividends with just 16 minutes played.

Collecting the ball from Alberto Moreno on the left, Coutinho switched it onto his right foot before whipping in a pinpoint centre that picked out the head of Sturridge, who did the rest by gleefully nodding beyond Bunn from close range with aplomb.

It had been a fairly tepid encounter until that point, but the Reds furthered their advantage just eight minutes later. This time, Milner’s set-piece from the left evaded everyone in the centre before nestling into the corner.

Jordan Henderson went agonisingly close to making it 3-0 when a speedy counter-attack resulted in Milner nodding Firmino’s cross into his path, but the captain’s side-footer struck Jores Okore a yard in front of the line.

Moreno was then thwarted by Bunn after being teed up by Firmino before Coutinho clipped a free-kick inches wide with Liverpool in complete control.

Villa’s goalkeeper also denied Sturridge at full stretch on the stroke of half-time after the No.15 had pounced on a loose ball inside the box and dispatched a curler towards goal.

The hosts began the second period with renewed impetus and Simon Mignolet was required to repel a drive from Leandro Bacuna inside the opening moments.

But Liverpool quickly regained their grip on the contest and duly added a third before the hour.

Can powered in to prod possession away from Bacuna and set Firmino free down the left. He in turn returned the ball to the German with a neat pass across the edge of the area and, after one touch to set himself, he drove into the bottom corner.

Klopp elected to withdraw Sturridge shortly after, with his position taken by Origi – and the Belgian wasted no time in making his mark.

His run in behind was picked out by an outside-of-the-boot pass from Coutinho, and with his first touches, Origi did the rest as he sped away from the trailing defenders before steering beyond Bunn just 37 seconds after coming on.

It was proving a real day to remember for those of a Liverpool persuasion – and it was to get even better as Clyne added his name to the scoresheet on 65 minutes, knocking a loose ball over the line following a scramble inside the six-yard box.

The Reds weren’t done there as Toure looped a header into the net from a corner to claim his first Liverpool goal and round off the scoring in style.