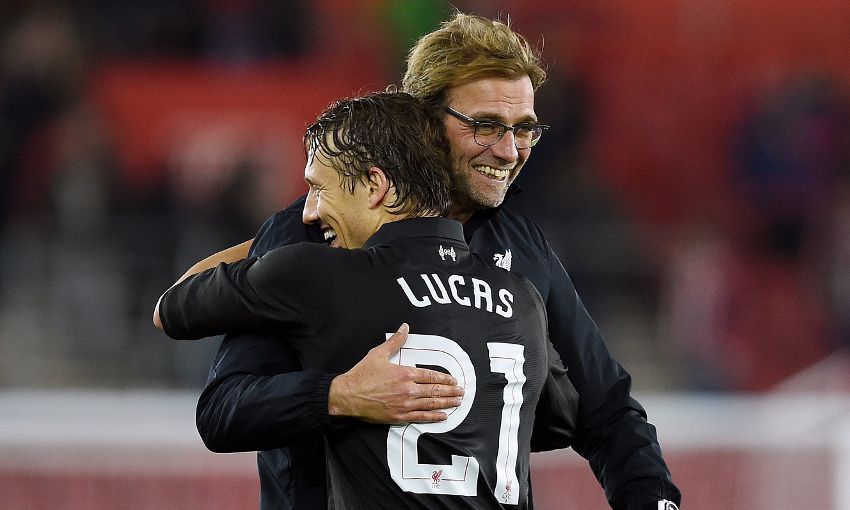 An injection of belief from manager Jürgen Klopp is to thank for Liverpool's new-found ability to turn games on their head, according to Lucas Leiva.

The Reds recovered from conceding a goal after less than a minute to dismantle Southampton 6-1 in the Capital One Cup on Wednesday evening, a result that secured their place in the competition's semi-final stage.

It was not the first time that Klopp had overseen such a turnaround either, with recent wins over Bordeaux and Chelsea featuring a comeback from the German coach's team.

Lucas, who started all three of those fixtures, insists the never-say-die attitude on show from his teammates of late is down to the boss.

And he cites the contrast between Liverpool's league meeting with the Saints just over a month ago - a 1-1 draw that saw them pegged back late on - and Wednesday's cup game as evidence of Klopp's work paying dividends.

"It was a very good result," he told Liverpoolfc.com.

"It wasn’t a good start, I would say, because in less than a minute we conceded a goal but we showed a lot of character to get back and at the end it was a brilliant result with so many goals and a comfortable win.

"Of course we still need to improve, especially the way we started the game, but when we score six goals there are more positives than negatives you have to look at.

"If you look back probably a few months ago, and especially against Southampton in the home game we played a few weeks ago, we conceded a goal late in that game and we didn’t have the energy to get back [into it] and the belief to score another goal.

"Wednesday night we showed [belief] when we conceded a goal and we did the same against Chelsea when we got back and won the game.

"We showed that we are not to worry about this. Of course we don’t want to concede but if we do then we have to work harder to get the other goals and that’s what we did."

Lucas' standing in the squad under Klopp was recognised with the captain's armband at St Mary's in the absence of Jordan Henderson and James Milner.

The Brazilian is clearly enjoying his football under the former Borussia Dortmund boss and explained that a much-needed confidence boost has helped him up his performance level as the season has progressed.

"I’m learning a lot and and he’s a very demanding manager but a person who tells you what you need to do to improve," he continued.

"That’s what he wants and if you make mistakes he just doesn’t kill your confidence and he gives you confidence to improve and tells you what you need to do.

"So that’s what we’ve been talking about and he’s trying to add some things on my game and I think slowly I’m getting there. Of course it’s never perfect but I’m very happy with the way I’m playing and improving.

"For me it was about the belief and the confidence that I needed. I think he’s been giving me that and giving me an important role to play in the team.

"I think everyone in the squad feels important and everyone feels that you have a part to play."

The victory at Southampton saw Divock Origi notch all of his first three goals for Liverpool since making the move to Anfield over the summer.

Lucas was understandably full of praise for the talented 20-year-old, enthusing: "I think he’s got the potential to be a fantastic striker.

"He’s got good feet so the goals he scored we could see his first one he was aware on Alberto’s shot.

"Then [for his second] a great strike after a great run, which is what the manager is asking him to do, and the other one a header - so three different goals, which shows what he is capable of doing."