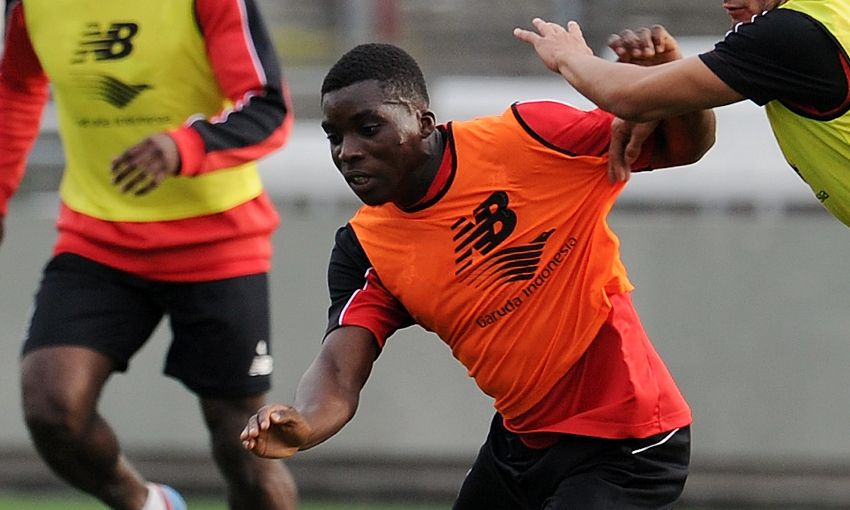 Sheyi Ojo will return to his loan spell at Wolves after the international break with renewed determination to make a good impression on Liverpool manager Jürgen Klopp.

The 18-year-old agreed a season-long switch to Molineux in August and has made a bright start to the campaign, scoring two goals in 13 Championship appearances.

The two-week break from domestic action has provided the opportunity for the young forward to return briefly to Melwood in order to meet the new boss and train under his watchful eye for the first time.

Ojo says he is happy with what he has heard from the German thus far, and is keen to prove he is the type of player who could thrive in the current setup.

"He seems like a really nice manager and he wants to help all of the players," Ojo told Liverpoolfc.com.

"He’s just said to me to keep my head down, keep working hard and obviously we’ll just see what the future holds.

"I think he’s come to see me a couple of times which is nice to hear and hopefully I can keep on improving and keep on doing well.

"With the right guidance I think I can do well in this team. I’m still learning and I’m still young so I’ll just see how it goes and see what the manager wants me to do."

Ojo also revealed that he is taking inspiration from one of his Reds colleagues during his stint in the English second-tier.

Last season, Academy graduate Jordon Ibe returned from a loan spell with Derby County in January and has since established himself as a first-team regular at Anfield.

The former MK Dons starlet said of his teammate: "He went out on loan last season and then got recalled back so it goes to show that if you do well on loan you get the chance to be called back and go straight into the first team.

"That’s my main aim to keep doing well and I do get the call back, I just need to impress the manager.

"I’m learning now at Wolves and getting more experience but the main aim is to come back and impress the manager, and hopefully I can start playing for Liverpool on a regular basis."

Wolves have endured somewhat mixed fortunes in the league so far this season, but Ojo insists that is only helping him to learn a lot about himself as a player.

The speed of thought required in the Championship compared to at Academy level is a test for the wideman, but one that he is enjoying.

"It’s going well. Results have been a bit up and down at the moment, but for me obviously I’m playing pretty much every game so it’s a good experience for me.

"I’m learning different things every match, so hopefully I can take that into next season and the future.

"Physically it’s a lot different to U21 football, so for me as a wide player or a forward you’ve got to make decisions quicker.

"Sometimes in a match I will get fouled quite a lot but you just have to bounce back up and get on with it."