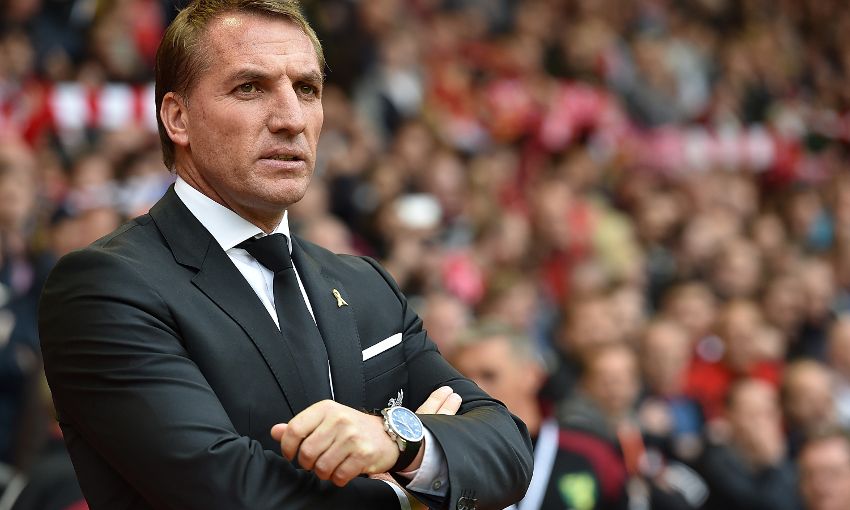 Brendan Rodgers saw signs of Liverpool's fluency returning during the second half of a 1-1 draw with Norwich City that ultimately left the manager disappointed at Anfield on Sunday.

Midway through the first of four consecutive home matches, the Reds had yet to significantly threaten John Ruddy and it was goalless at the interval.

Christian Benteke was withdrawn as a precautionary measure, meaning a chance for Danny Ings from the bench – and the No.28 struck in front of the Kop within four minutes.

But Russell Martin soon registered a response for the Canaries and Ruddy refused to be beaten again, continually thwarting the hosts’ efforts to claim three points.

Rodgers reflected: “[We are] disappointed and frustrated with the result, but I thought in particular in the second half, there were a lot more signs of our fluency and creativity.

“In the first half, we were a bit static, I felt, we had the ball in decent positions but probably the movement in front of the ball wasn’t as we would like.

“But also on the back of our last performance here, [there was] a little bit of anxiety in the first half. [In the] second half, we freed ourselves up a little bit more.

“Danny Ings, coming on, was outstanding, his pressing and ability to run in behind was there to see.

“It was going to be important that we got the first goal, which we did with an excellent goal. Then we lost our concentration for a set-piece, which is not so good from our part.”

On replacing Benteke with Ings at half-time, the manager explained: “His hamstring felt a little bit tight so there was no point in risking it. We had fresh players on the side.

“Danny was excellent and gave us a different dynamic in the game. He was brilliant.

“You saw what it meant to him and you saw how the supporters responded to him. He showed great enthusiasm and it was an excellent finish – his touch and finish off his left side was very good.”

After Martin’s leveller, Liverpool fashioned a handful of chances to win the game – most notably when Philippe Coutinho went clean through on goal only to be foiled by Ruddy.

Rodgers, though, felt the Reds can take a degree of encouragement from their attacking endeavours.

He said: “I think we created enough chances to win the game, so that obviously disappoints – but the most disappointing factor is the goal.

“It was their first corner in the game and our organisation was clear – they had six men in the box and we knew exactly the roles.

“But we lost concentration and Russell Martin hooks it in. It was disappointing and it was a goal that shouldn’t happen.

“Apart from that, there were a lot more positives from today. We want to win every game here, no matter who the opponent is.

“Give credit to Norwich, a team with confidence from getting promoted and their result last week, but we know when we’re here [Anfield] our performance level should be so we can win games.

“I think today was a step forward for us in terms of the creativity back into our game and hopefully we can progress from that.”

Daniel Sturridge notched up 62 minutes on his return to action after five months out and Rodgers was pleased to be able to call on the services of the striker once again.

“I felt it was important to get him on the field and he did well for the hour he played,” the Northern Irishman stated.

“He’s still a way off his full fitness, but his presence and stature in the game will always give us hope because he’s got big quality. It’s just about games for him and building his fitness – and there’s no pressure for him to do that.”

With Anfield clashes against Carlisle United, Aston Villa and FC Sion to come over the course of the next two weeks, Rodgers outlined why his side need to increase their ‘courage and bravery’ in front of the Kop.

He said: “I think it [three consecutive home games] is a positive for us. We knew we had four games here to get our performance level to where we want it to be.

“The big thing for Liverpool, and I’ve always said to the players, is the beauty of playing at Anfield. It’s a real special place to play, but you’ve got to have courage and bravery to play here.

“There’s a big history here at Anfield, but embrace it and ensure you take the risk. You have to risk and you have to play positive football.

“I had the same feeling when I first came in – there was a feeling of anxiety around the team, but we went on and it became a real fortress for us here.

“Unfortunately, now we’re having to rebuild that again and get the focus back on being really positive at home. I saw signs of that in particular in the second half.”

The boss added: “I think [confidence] will grow with results.

“It’s natural for players, with the expectancy around Liverpool and everything that comes with that, if you’re winning games and your football’s flowing then of course your confidence is going to be at a far higher level than what it might be now.

“We just have to build that confidence through our training, through the games, and it’s just step-by-step, getting to the next game and hopefully a good performance and keep getting results.

“That’s the way it is at the moment; it’s difficult because we want to be better in terms of results, we’re obviously losing key players, players coming back, new players coming in looking to get into the philosophy and the way of working here – and there’s no respite, it’s game after game.

“It’s certainly something that we’re embracing and the players, I’m sure, if they continue to work as they have been on a daily basis, they’ll get their rewards.

“Hard work pays and it’s just going to be a matter of time until they can get the results to be rewarded by that.”