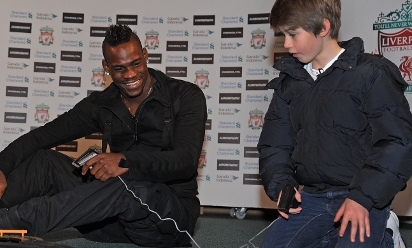 A whole host of senior LFC stars feature in the first episode of the new series of 'Kop Kids' on LFCTV this weekend - take a glimpse at what's in store in our behind-the-scenes photo gallery.

Mario Balotelli, Daniel Sturridge, Adam Lallana and Rickie Lambert appear in various segments of the show, which will air for the first time on LFCTV at 10am BST on Saturday.

Filmed in February this year, we captured Balotelli getting a grilling from Kop Kids reporter, Finn, Sturridge hitting the dance floor with Paisley and Lallana and Lambert putting their friendship to the test in a game of darts with a twist.

Take a sneak peek at what's in store by browsing through the gallery below.

The first episode of the new Kop Kids airs at 10am BST on Saturday May 2. It'll also be available to watch online via LFCTV GO.

Kop Kids will also be broadcast on Sunday May 3 at 7am and 9.15am. For details on how to watch the club's official television channel, click here.