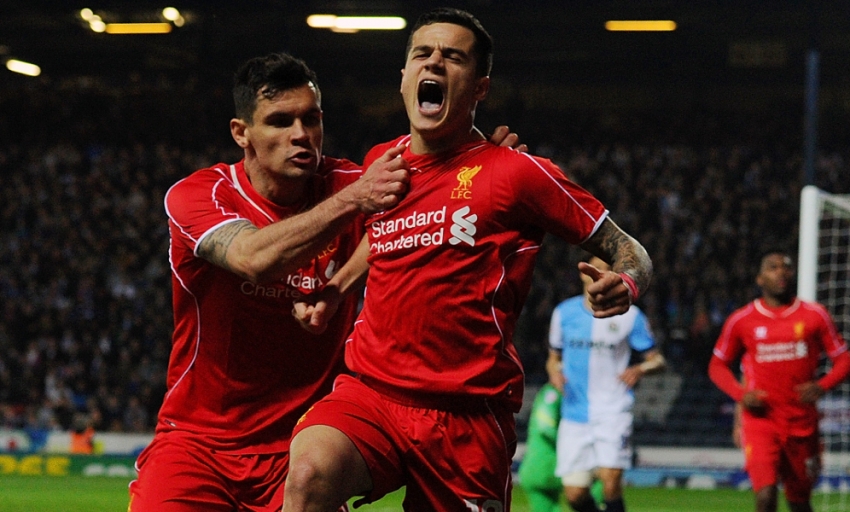 Liverpool are heading to Wembley after another sublime strike from Philippe Coutinho carried the Reds to a priceless 1-0 victory over Blackburn Rovers in their FA Cup quarter-final replay.

Brendan Rodgers' men rode their luck at times at Ewood Park, with Simon Mignolet a stubborn obstacle between the posts, but summoned the pivotal contribution 20 minutes from full-time.

Clever passing by Coutinho and Jordan Henderson allowed the former to sneak into freedom and send a piledriver nestling into the far corner to book a trip to the capital for the Kopites behind that goal.

A fourth win on the road in the FA Cup this season means Liverpool now progress to a semi-final against fellow Barclays Premier League side Aston Villa at Wembley on Sunday April 19.

There were three changes to the Liverpool line-up and a switch in system too - Glen Johnson and Dejan Lovren were selected as part of a back four while Daniel Sturridge spearheaded the away attack against the Championship side.

An early opening fell fortuitously to Joe Allen as a clipped, hopeful diagonal from Henderson was insufficiently cleared by Alex Baptiste, but the Welsh midfielder dragged his bobbling 20-yard effort wide to the left of the Rovers goal.

With the home crowd directly and figuratively behind them, Blackburn settled into the contest quickly and when Craig Conway scampered into space and bore down on Mignolet's goal after 14 minutes, the reactive recovery of Mamadou Sakho was vital to block.

Sturridge, a scorer on the road in the previous round at Crystal Palace, went close to another here by grasping control of possession amid a scrappy period of play and shaping a powerful dipper that was just a touch too high to trouble the net.

Jordan Rhodes' record of five goals in six games before the replay signposted him as an obvious danger man, and the Scotland international should have concerned Mignolet with a header having crept into an unmarked position inside the area. Instead, he sent the nod into the travelling Kop.

Rodgers was then forced to make a substitution, with 27 minutes played. Sakho limped off the Ewood Park turf, replaced by Kolo Toure - who had made a similarly early entrance to proceedings in the initial meeting between the sides at Anfield.

Rovers goalkeeper Simon Eastwood had been spared any tests so far, but his awareness of danger ensured that when an inswinging corner bounced out to Coutinho and the Brazilian returned a scuffed shot, which was flicked on by Sturridge, he could palm away safely.

It was the visitors mounting the pressure as the interval approached - the likes of Coutinho and Raheem Sterling slowly working through the gears - though the deadlock remained when referee Kevin Friend blew the whistle for the break.

Within seconds of the restart, Mignolet was at full stretch twice to keep it level. Firstly, the Belgian pushed out a dangerous curler from distance by Tom Cairney and then the 'keeper reached out a glove to claw Ben Marshall's header onto the near post.

Momentum was firmly with Gary Bowyer's charges at this stage, and their approach was typified by Markus Olsson's searing dribble along the left flank and deep into Reds territory which required the attention of Johnson and Lovren to quell.

Home fan favourite Rudy Gestede was introduced in an effort to provide further impetus to Blackburn's intentions and an immediate combination with Rhodes forced Toure to lunge out a leg and thwart the latter's strike from an angle.

Liverpool's attacking work had too often been methodical, not magical.

But, on 70 minutes, the magician himself opened his box of tricks. Using Henderson as the wall for an intricate one-two, Coutinho drove into the Rovers area and swiped a sweet hit across Eastwood and into the far corner with aplomb.

Sturridge was soon found over the top and with an opportunity to extend the advantage. Setting his sights from a left hand spot, the No.15 opted for a lofted effort that beat the Blackburn custodian but also the crossbar.

No additional strike was needed, though. The Reds preserved the slender lead and the final whistle brought the satisfaction of knowing they have moved a step closer to the objective of FA Cup success. Villa await next Sunday.