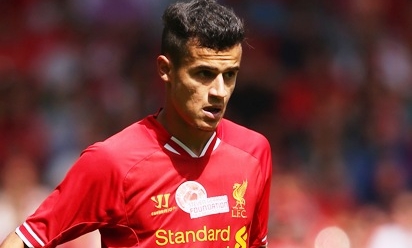 What was Shankly's last LFC menu?

Brendan Rodgers has once again expressed his appreciation for Liverpool midfielder Philippe Coutinho and explained what has encouraged him most in the Reds' unbeaten pre-season to date.

We revealed in June that January signing Coutinho had leapfrogged the likes of Steven Gerrard and Luis Suarez to become the most popular choice of name for fans to have on the back of their shirt.

That progression has not gone unnoticed by the Brazilian's manager, who expects the No.10 to be an integral part of the team's Barclays Premier League challenge this season.

"You look around the city now and there are so many kids and people who have 'Coutinho' on their shirt," the Northern Irishman told LFC TV.

"They obviously love watching him like I do. I'm fortunate enough where I get the chance to see him every day.

"He's a wonderful talent, a player that creates goals and scores goals. He's a joy to watch. He'll play a big part for us this season.

"I've been delighted with the appetite and determination of the players. That's five games we've played now in pre-season and we haven't conceded a goal.

"Today's opponents are Champions League opponents. It was a really good test for us in where we're at in our conditioning.

"We've still got a couple of weeks to go before that first game but everything is going along really well and we're in good shape."

Rodgers was speaking after guiding his charges to a fifth straight victory this summer, a 2-0 win over Olympiacos in captain Gerrard's testimonial match at Anfield on Saturday.

The boss continued: "A great day for Steven and how he probably would have wanted it.

"It didn't look like a testimonial game - the work-rate and intensity of the team. We scored two goals and maybe could have had a few more.

"A great day for him, a great response and what he wanted - a proper game; and obviously another good game for us in our preparation for the season.

"He's a wonderful testament to hard work, determination, respect and humility. He's a real gentleman on and off the field.

"He's got that hunger and desire, and when he plays he's never beaten; never ever beaten. He's very much a team player. 15 years here now and 630 games, he's a wonderful demonstration of loyalty and affection for one club.

"The supporters showed him that in return today, they love him. I was asked the question: 'Is he the best player in the history of Liverpool?'

"It's not for me to say that but I'm certainly not sure there's anyone better than him and great respect to him. I think he's got a good few more years left yet." 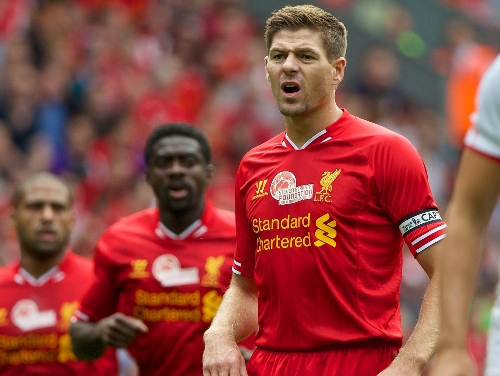 All concerned were keen to ensure that Saturday's friendly maintained a level of competition as the Reds prepare for their Premier League opener against Stoke City on August 17.

Nevertheless, Gerrard and Rodgers allowed a touch of sentiment by including former Reds Jamie Carragher and Robbie Fowler in the squad. The manager was particularly pleased to hand the latter 20 minutes.

"We spoke yesterday and I said that if he performs like he did in training, we may not have to bring in any more strikers!" the 40-year-old joked.

"I was delighted for him, I love Robbie. He's a really good guy. He typifies everything that I love about the former players here; he's a humble guy.

"He's a legend in his own right, one of the best strikers in the history of the Premier League, a god here at Anfield. My door, as I said to him, will always be open for him.

"He trained yesterday and still showed those little magical touches and finishes that he had.

"It was great for him to get 20 minutes today because he obviously left here and moved on in his career, but it was nice that he got the reception that he did and nearly got a goal in front of the Kop - which would have been great for him."