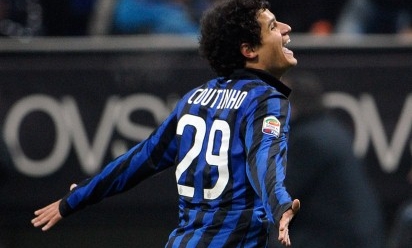 The Reds' new Brazilian in profile

1. The 20-year-old's full name is Philippe Coutinho Correia. He becomes the fifth Brazilian to represent Liverpool, following in the footsteps of compatriots Fabio Aurelio, Diego Cavalieri, Doni and Lucas.

2. Coutinho has two older brothers, both of whom are professional lawyers. The trio of siblings developed a tradition during childhood which they still adhere to - after every game, they spend time watching and assessing Philippe's latest performance.

3. The attacking midfielder has made one full international appearance for his country to date, playing 45 minutes for Brazil in a 3-0 friendly victory over Iran in October 2010. New teammate Lucas Leiva also featured in that fixture.

4. At the U20 World Cup in Colombia two years ago, Coutinho featured in all seven matches for Brazil, who won the tournament by beating Portugal in the final. He was on target three times in the group stage, converting a penalty against Austria and notching twice past Panama. In the quarter-final with Spain, Coutinho narrowly missed the chance to face Daniel Pacheco, who was introduced as a substitute after the Brazilian had left the field.

5. His arrival at Anfield continues Coutinho's recent trend of working with young managers. During his loan spell at Espanyol, the midfielder was coached by 40-year-old Mauricio Pochettino. The current Inter Milan boss is Andrea Stramaccioni, aged 37, while new manager Brendan Rodgers celebrated his 40th birthday this month.

6. The signing of Coutinho increases the crop of South American players at Anfield to five, joining Sebastian Coates and Luis Suarez of Uruguay, plus Brazilians Lucas and Doni. Aside from Lucas, who joined the Reds in 2007, all have been brought to the club within the past two years.

7. Coutinho has developed a reputation as a dead-ball specialist due to his accuracy from set-piece situations. His first goal for Inter Milan came from a precise, curling free-kick against Fiorentina in May 2011.

8. Coutinho has previously worn 7 and 29 at Inter, currently worn by Luis Suarez and Fabio Borini respectively at Anfield. The Brazilian sported No.23 at Espanyol - worn with distinction by Jamie Carragher for Liverpool.

10. Born on June 12, Coutinho shares a birthday with two former Liverpool players. The late Tom Gracie represented the Reds from 1912 to 1914, while more recently Antonio Barragan made a single appearance for the club before returning to Spain.

If you want to see Philippe Coutinho in action, book matchday hospitality>>

Coutinho outlines his confidence for 2017-18 upon Melwood return

Melwood blog: Recap as Coutinho and Lallana return for Reds