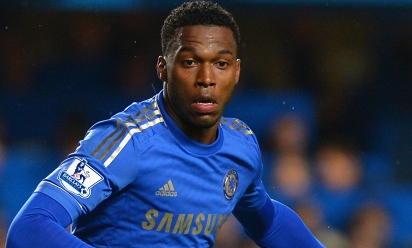 Our new striker in profile

Liverpool today completed the transfer of Daniel Sturridge. Here are 10 facts about our new boy...

1. Daniel Sturridge was born in Birmingham in 1989 and before moving to Manchester City's youth set-up in 2003, he spent time at Aston Villa and Coventry.

2. Sturridge comes from a footballing background. He is the nephew of former Derby and Wolves striker Dean Sturridge.

3. In the 2007-08 season, Sturridge became the only player ever to score in the Youth FA Cup, the FA Cup and the Premier League in the same season.

4. He finished the 2009-10 FA Cup campaign as Chelsea's leading scorer with four goals as Carlo Ancelotti's side completed winning the double by beating Portsmouth 1-0 at Wembley.

5. In January 2011 he went out on loan to Bolton and when he netted against Wolves, Tottenham, Everton and Newcastle in succession, he became only the sixth player to score in his first four games for a club in the Premier League.

6. Sturridge can play either as a striker or out wide. In March 2012, he told Sky Sports: "Fitness-wise, it helps you so much playing on the wing as it's a completely different job - you do a lot more runs than you do up front. Thierry Henry played wide for Juventus and then went to Arsenal and played as a centre-forward."

7. In his first appearance of the 2011-12 campaign, Sturridge scored with a memorable back-heel in the 50th minute against Sunderland.

8. Sturridge has represented England at every level from U16 to U21 and full international. He netted in the final of the 2010 European U17 Championship against Italy.

9. The 22-year-old has Premier League, Champions League and two FA Cup winners' medals to his name.

10. Sturridge was named in Stuart Pearce's 18-man squad for the Great Britain Olympic football team to compete at the London 2012 Olympics this summer and the forward netted twice for Team GB including the match-winning goal against Uruguay.

Sturridge: This is the best I've felt for a long time

Daniel Sturridge: It's a great feeling

'Daniel Sturridge is a real, real option for us to face West Ham'