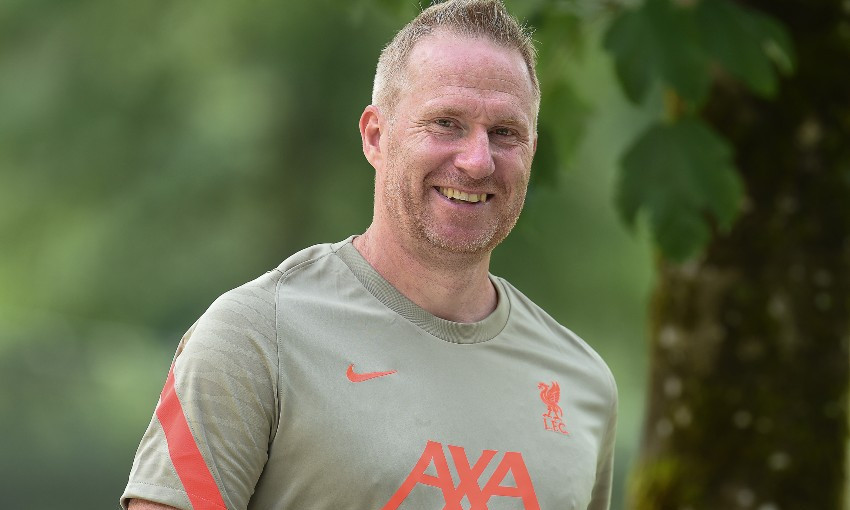 It was the summer of 2018 and he was out and about with his family.

He assumed the missed call from an unknown UK number would be a company trying to sell him something.

He was wrong. Very wrong.

“There was a voicemail message so I went to the car to listen to it,” Gronnemark, football’s first and only specialist throw-in coach, recalls to Liverpoolfc.com.

“It was Jürgen Klopp - and it was a good thing that I was sat down when I heard him! Even though it had been a dream to coach at some of the biggest clubs, you never know if it will happen, that’s the way it is.

“I tried to call him back and he didn’t take it this time, which was probably good because my heart was pounding! I went back into the shop and told my wife and of course she was as surprised as me.

“My son Daniel, who is 19 and really into his sports, was so excited and we decided to go home so I could take the most important call of my life. Suddenly on our way home the phone rang. My wife picked up and said, ‘It’s Jürgen!’

“I stopped the car and we spoke and he said: ‘I read an article about you in a German newspaper, we had a really good season [in 2017-18] but we were really bad at throw-ins, we lost it almost every time.’

“He invited me to Melwood the week after for a visit. We had a fantastic meeting and talked about not only throw-ins but also a lot of things. I speak German too so that helped, as speaking the same language always brings people closer together.

“It should only have been a meeting but the day after there was a chance for me to coach 21 players who had been on vacation and were not at the World Cup. Then, the week after, we signed the first contract. At first it was only for six months but pretty early we signed another half-year contract and since then, I have been signing full-year contracts.

“Now it’s my fourth season working with Liverpool and I still have to pinch myself. It’s like a dream come true.”

Proud to tell that I have signed a new contract with Liverpool FC for my 4th season in the club. I enjoy every seco… https://t.co/w8GcxSOqKA

When your profession is unique there is no such thing as an established career path to follow.

Having played at the top level of U19 football in his native Denmark, Gronnemark switched to athletics in 1995.

“I wasn’t good enough to be a professional football player [but] I was really fast,” he says, during an in-depth chat at the team hotel in Saalfelden, Austria, at the Reds’ pre-season training camp.

“I never lost a running duel in football in my entire life, no matter if it was 10 metres or 50 metres. And I had a really good throw-in too.”

Within two years, Gronnemark had earned a place on Denmark’s 4x100m team and, over the course of six years in athletics, he would also become his country’s individual champion at 200m and 400m.

A move to the small, northern outpost town of Skive in 2002 brought about by meeting his future wife led Gronnemark to reassess the direction of his career.

“I lost my motivation because it just turned into numbers on a piece of paper,” he remembers of carrying out sprint training in solitude. “I wanted to move back into team sports, so I joined Denmark’s national bobsleigh team.”

Halfway through a ‘fantastic’ four-year stint in the winter sport, the seed of an idea that would form the foundation of his future was planted.

During a friendly football game between the Danish and German bobsleigh teams, Gronnemark took a throw-in that caused astonishment among his colleagues due to its logic-defying distance.

“I thought then: ‘If I can make a good throw-in myself, can I teach other players to do it?’” 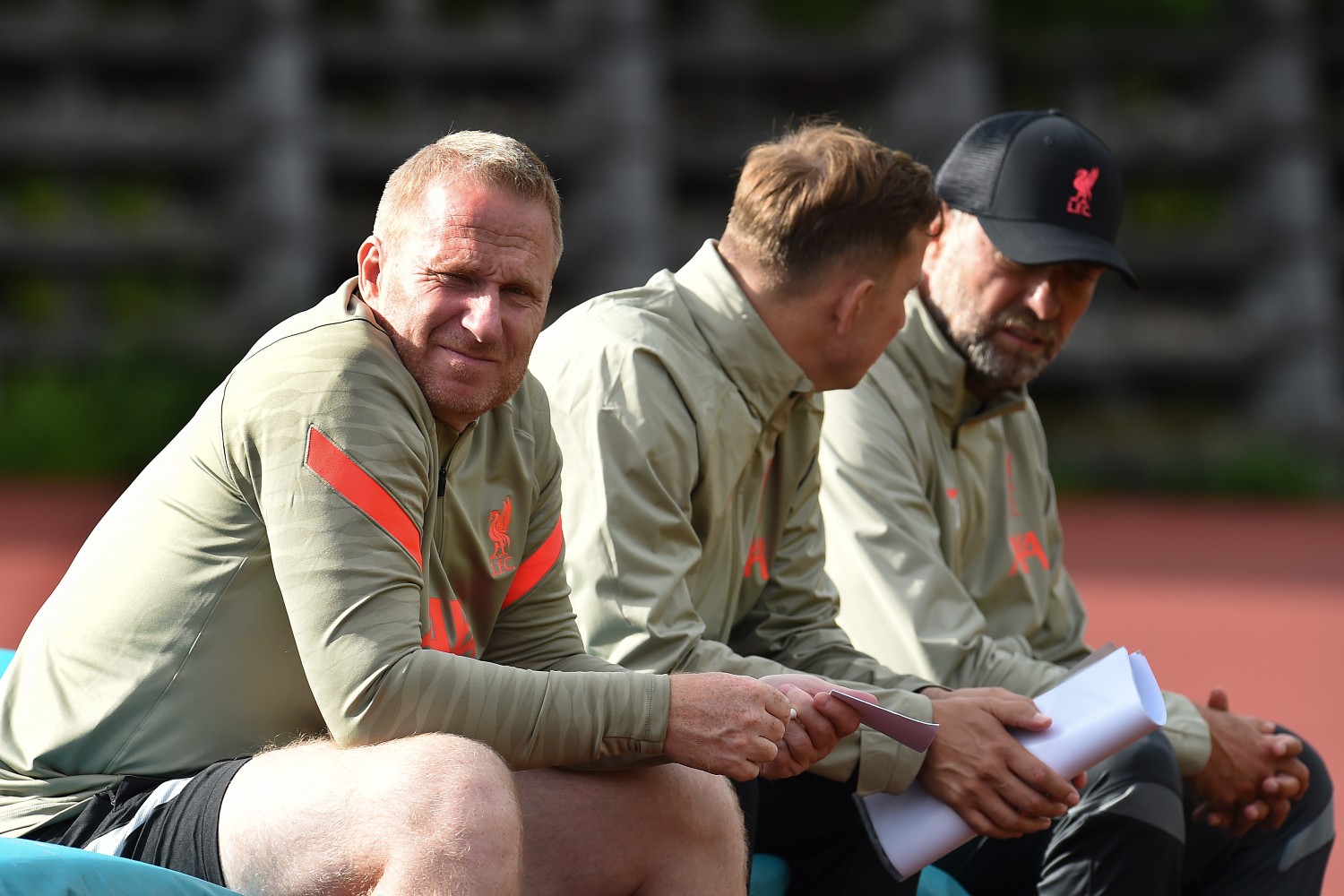 Having found no existing reference materials on the subject, Gronnemark spent six months creating his own course on throw-ins and duly got his first breakthrough into the realm of coaching at Danish Superliga outfit Viborg FF.

An association with Midtjylland that would eventually lead to a 10-season stint with the club began in 2005, a time when Silkeborg IK also made use of his services.

His new career was up and running.

Initially Gronnemark’s coaching was focused solely on long throws, but an epiphany that arrived while causally watching sumo wrestling on TV would broaden his work - and ambitions - significantly.

“One of the wrestlers did a move that involved turning their opponent around and I realised that maybe we could do something similar in football,” he recounts.

“I started watching and analysing games and was horrified because I found out that most teams kept possession on only 50 per cent of the occasions when they had a throw-in under pressure. I couldn’t believe it.

“From the 2006-07 season, I started developing what I call the ‘long, fast and clever’ throw-in philosophy.

“I was really sure that it was only a matter of months or a few years before I would get my international breakthrough because I saw that I could help all the teams in the world. Not only the ones that like set-pieces, but also the technical ones. All teams.

“But I was left frustrated because there was still a lot of demand around my long throw-in coaching skills, but not ‘fast’ or ‘clever’ at all.

“It was actually only when the gaffer, Jürgen, called me in July 2018 that I had the chance to properly work on the things I saw were valuable over 10 years earlier.” 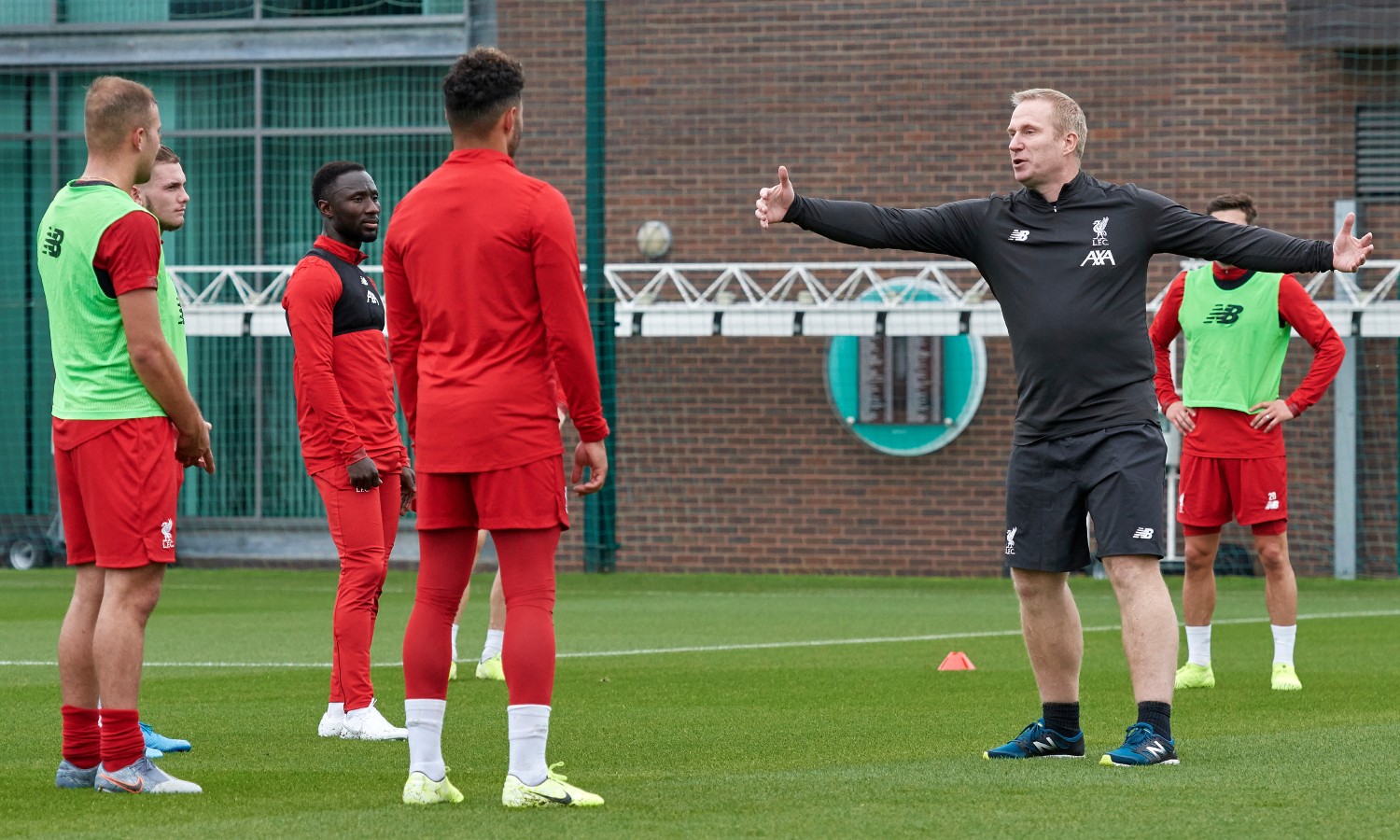 Upon arriving at Melwood for the first time, Gronnemark found a group of players and staff fully receptive to new ideas.

“The atmosphere in the whole club, and also the team, is very kind. They are very open-minded,” he states.

“I told the guys in that first session: ‘There are between 40 and 60 throw-ins in a match and most teams lose the ball more than half the time they have a throw-in under pressure. If you had the same percentage with your feet, you’d only be playing Sunday league football.’

“Imagine a midfielder with a pass percentage of only 35 - you would say, ‘horrible’! But with throw-ins that was kind of accepted. I also said to the team, ‘I am not going to make you into a long-throw team, we are not going to take a lot of long throw-ins towards the opposition goal’, because that could have been a fear for some of the players.

“Afterwards, Jürgen said to the team: ‘One of our biggest weaknesses was throw-ins and I am 100 per cent sure that Thomas can help us.’

“These really fantastic players, all really motivated and ambitious - at that time they were so close to being at the top of the Premier League and winning the Champions League - they heard what Jürgen was saying and thought: ‘We have a weakness and here is someone who can help us.’

“I can only be happy with the level of open-mindedness and motivation I have found with the players and staff here at Liverpool.”

Gronnemark will typically spend five spells of three or four days with the Reds throughout a season, and his remit is not limited to the first team.

The Dane also coaches the club’s U23s, U18s and U16s sides and, during 2020-21, spent a week at Kirkby educating all at the Academy on the art of the throw-in, from coaching staff down to the U10s.

“It’s just as important to me to work with kids as senior professionals. Of course, it’s two different experiences but I love it,” he smiles.

The vast majority of his work at Liverpool is based around ‘fast’ and ‘clever’ throw-ins.

“I would say here it’s only been a two or three per cent focus on long throw-ins,” he details.

“But at least at the start of my work with all clubs - even ones where we don’t use long throw-ins as a set-piece weapon - we do a bit of longer throw-in coaching because it gives players a bigger throw-in area.

“I think perhaps the best example I have of this work is Robbo, Andy Robertson, because when we had the first test in my first season he could throw 19 metres - and that’s really short.

“A lot of people who aren’t footballers would throw further. The challenge was not that we wanted Robbo to be a long throw-in specialist, it was that every time Liverpool had a throw-in on the left side of the pitch, he had a really small throw-in area because he couldn’t throw longer. That meant there were very few options for him.

“Then you put on top of that that Robbo is really good at intelligent play too, that he takes the right decisions and sees the space being created, that makes a good combination.” 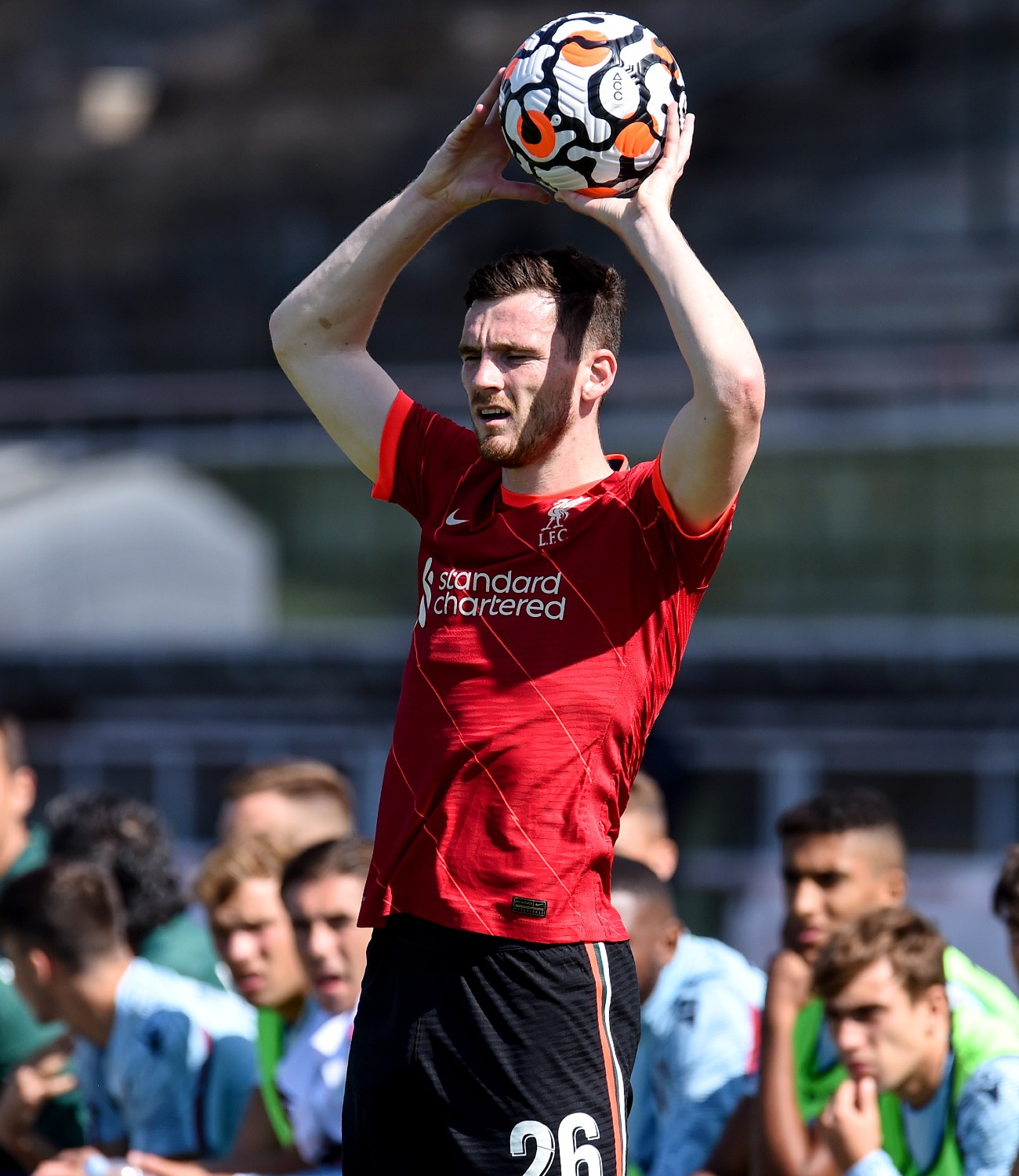 Gronnemark’s work with Klopp’s squad has become more advanced over the course of his first three years with the club, with basics such as throw-in length, positioning and space creation being superseded by more specific drills and what he terms ‘individual throw-in superpowers’.

The overarching objective is to improve each individual’s ‘throw-in intelligence’.

“Throw-in intelligence is to first of all know when to throw fast and when to have patience,” Gronnemark notes.

“So, a really high throw-in intelligence is when a thrower is able to see space being created and then afterwards he is able to take good decisions.

“Of course through a whole season you will never take 100 per cent perfect decisions, but if you can take a good decision seven or eight times out of 10 rather than two or three times, that’s a real improvement.

“Players with high throw-in intelligence have, in theory, millions of options and if you get the understanding between the players right, it’s almost impossible to mark.” 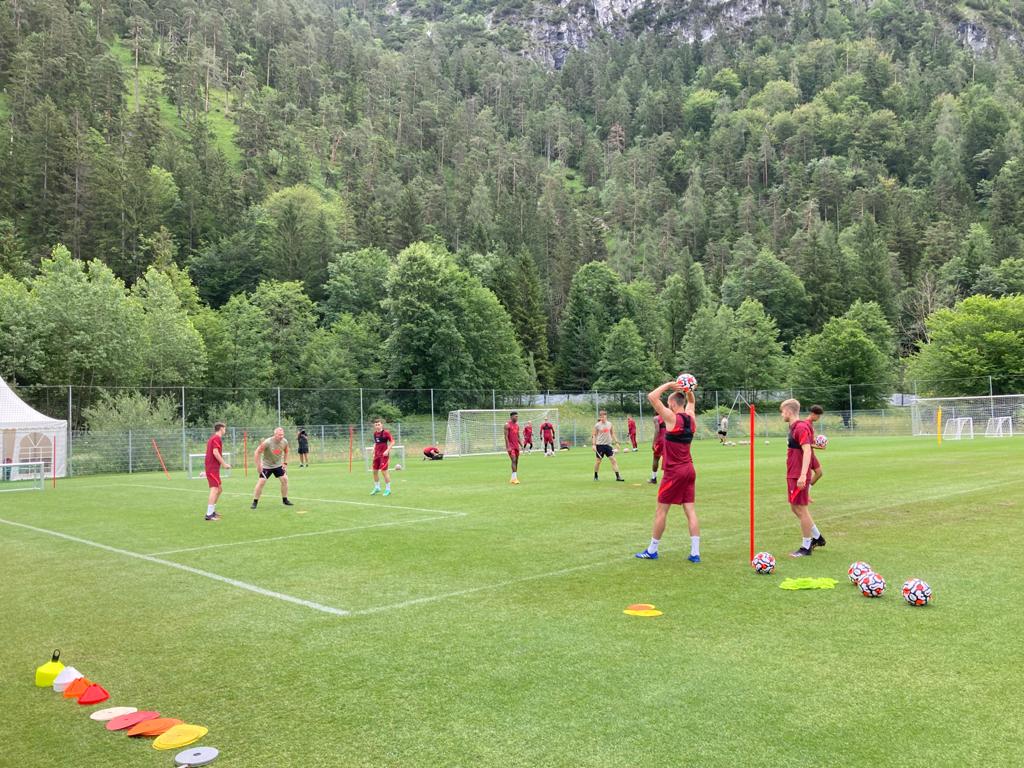 What constitutes success for Gronnemark, then? And how would he sum up his time with Liverpool to date?

“Well, we can see that the team has definitely improved a lot on throw-ins,” begins his considered reply.

“For example, statistics from Tifo Football said that in the 2017-18 season, Liverpool had possession of 45.4 per cent on throw-ins under pressure and were 18th out of the 20 Premier League teams [in that metric].

“In 2018-19, my first season, the team improved to 68.4 per cent and were number one in the Premier League and number two in the whole of Europe - actually after one of my other teams at that time, FC Midtjylland!

“It’s really important for me to say that these kind of numbers just give an idea. They don’t give the whole truth and for me, it is only important to count throw-ins under pressure because they are the difficult ones.

“I won’t say that I am only satisfied if we get 100 per cent possession on throw-ins under pressure in a game because that is really difficult. I think we have done that maybe 10 or 12 times in three seasons… but I am really satisfied with the work in all areas from the team.

“We don’t have to score from a throw-in to make me really happy. It could also be a single throw-in where we just keep possession and all the movement and all the communication is perfect and I just say, ‘Wow!’ Then I am really, really happy.

“This is now my fourth season and if the training didn’t work, and the team thought it didn’t work, I would not be here.

“For me, that is the best proof that it works - that I am still here!”

'You can't have enough specialists around' - LFC quotes of the week