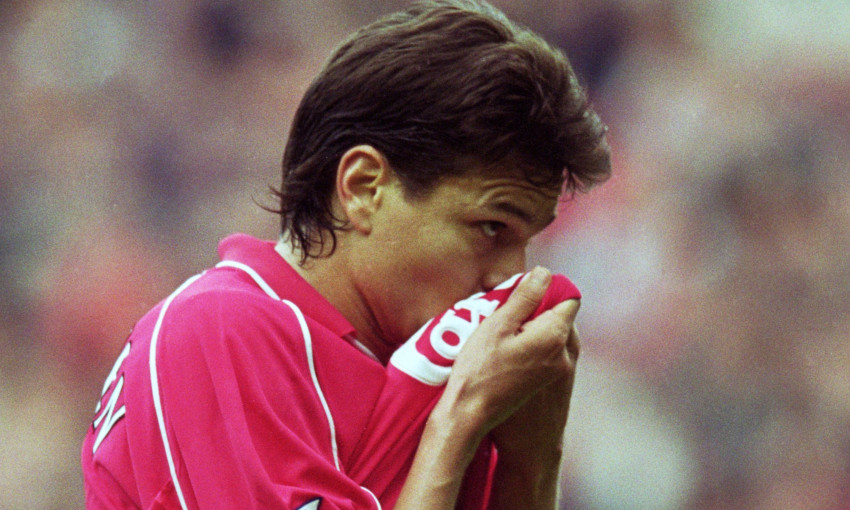 Jari Litmanen is proud to have made a lasting impression on Liverpool fans during an 18-month spell with the club that the boyhood Red loved.

The Finnish forward moved to Merseyside from FC Barcelona in January 2001 in a dream transfer for a player who had been besotted by the all-conquering sides of the 1970s and ‘80s.

He would go on to make 43 appearances and score nine goals for Gerard Houllier’s team during a period of sustained success and progress on the pitch.

His spell was tinged by a frustration – shared among supporters – that he did not gain enough playing time, with 24 of his outings as a substitute.

But Litmanen looks back on his Anfield stay with a wealth of fondness having achieved the life goal of representing the team who captured his heart as a child via television.

We caught up with the 49-year-old this week to coincide with the Reds’ Champions League tie against AFC Ajax, another of his former sides.

Read the second part of the interview below…

Looking back at your time with Liverpool, how do you reflect on that now? It felt longer than 18 months and you left such an impression on the club and the fans…

I was there for one-and-a-half years and I was really happy to be at Liverpool because it was my favourite club. Liverpool already asked me twice earlier [to sign for the club] – the first time I stayed at Ajax, the second time I went to Barcelona. So, to be part of Liverpool Football Club was something special and there was nothing else, just I expected to play more and it didn’t happen. I was over 30 years old and at that period of time I wanted to play more and I expected to play a little bit more. But it didn’t happen, so that’s why I went back to Ajax. Ronald Koeman became the manager there and he wanted to sign me as an experienced player for the young talented players. Of course, it was a nice period also for me to go back to Ajax. But if things were right at Liverpool, for sure I would have played longer there. But as a football player you want to play and it didn’t happen as much as I expected. I still remember my stay at Liverpool in a positive way.

Anfield is something special. I was so happy as a former player but also as a fan that we didn’t go to Stanley Park, to a new stadium, that we stayed at Anfield. That was a really good decision. Liverpool is Anfield. I visited Liverpool five years ago when the new stand was ready, that’s amazing. I remember those old houses behind were really close to the former Main Stand; now the houses are gone and this new stand is bigger, it’s so nice, there is so much space. It’s really lovely. Liverpool is Anfield and when you go there to watch a game or go to the stadium to see the pitch, you really feel there is something special. The history of the place, this is Liverpool. Like Barcelona, for example, and Camp Nou – I have also visited there regularly after I left Barcelona. Barcelona is Camp Nou.

If there is a game on TV and I can see it, it feels so nice to see a game at Anfield. Especially the Kop, that’s something special. I know the history of the Kop and I have a feeling as a fan of the club, of course, with the Kop. At this moment we have COVID, while there are no people at the stadium you realise how important those fans are for the club, especially for a club like Liverpool – that Kop stand is something really, really special. The players, team and Kop have always had a special feeling. That’s the feeling I grew up with Liverpool in the ‘70s and ‘80s, this Kop and the celebrations. It seems like all the most beautiful goals in the history of Liverpool were always in front of the Kop.

Did you ever stand or sit on the Kop before you joined the club?

No, I joined the club and that was the first time I was at Anfield. But, of course, I had a lot of pictures and followed the games and knew the history.

Just how obsessed were you with Liverpool as a youngster and why were the Reds the team for you?

I grew up with Liverpool and still remember Kevin Keegan playing there. He left the club in ’77 after winning the European Cup. Then Kenny Dalglish came. There was Ray Clemence, Phil Thompson, Phil Neal, Terry McDermott, Graeme Souness, I remember all those guys. I saw something a week or two weeks ago when Ray Clemence passed away, I saw five minutes of his highlights at Liverpool, those moments at Anfield and three European Cups. I started to remember those early years of mine in the ‘70s when I started to follow football and I started to follow Liverpool. I started to remember some games and some moments because Ray Clemence was the ‘keeper at that time. For me, he was, of course, at that time the best goalkeeper in the world. When I heard he had passed away and saw those five minutes of highlights of him at Liverpool, it was something special for me to see Ray Clemence there. I remembered those moments from more than 40 years back.

What would you choose as your own favourite moment during your time at Liverpool?

When I came to Liverpool it was a good moment to come. That team was growing and there were some young talented players coming through. Michael Owen was already in the international team; Robbie Fowler had shown his quality; Steven Gerrard was in his first or second year in the squad; Emile Heskey had been bought from Leicester. There was a really good squad of local guys, English guys and then the internationals. Sami Hyypia was important, Didi Hamann, [Gary] McAllister was there and was really good for us, Markus Babbel and of course Patrik Berger and Vladi Smicer. We had a squad of 20 players who were all really good for the team and the club. When I came we were just growing and I was there from January 1 [2001]. Just five months later we had won the League Cup, FA Cup and UEFA Cup. So it was a really good time to come, to see Liverpool growing and growing further.

That second year – my only whole year – was really good for us. We were in the Champions League, we reached the quarter-finals and we actually did very well against Leverkusen but in Leverkusen they scored in the last 10 minutes and went through and even reached the final. In the Premier League, we finished second. So we did really well in those one-and-a-half years and it’s really difficult to say what is the one thing. It’s really difficult, even not possible. I saw it as a really good period, one-and-a-half years where I could play at the club I have loved. There was a really good squad, I loved to be there and play there. The only thing was I expected to play a little bit more, but it didn’t happen. I have all the respect for the players who played and the managers who decided the team. There is no problem on that.

Are you aware of how much the fans still talk about you and that they would have liked to have seen more of you at Anfield?

It happens sometimes if I am in England or somewhere and I meet Liverpool fans, the first question is always: “Why didn’t you play more?” I don’t know. Of course, it’s nice that they have a good memory of me as a player because that’s why I was there – to play as good as I can. There was a special feeling with me and the fans and the club because I was a fan of the club as well. That, of course, is special. It’s not like that for all the players who are playing for Liverpool or some other clubs, that they are also a fan. But at Liverpool there have been some players who have grown up particularly with Liverpool. I remember Stevie G, for example, he was a fan of Liverpool and he grew up with Liverpool. I’m happy that I have done something for the fans that they have nice memories of me as a player. Like I said, if I see Liverpool fans now the first question is always the same: why didn’t I play more?

On this day: Houllier returns on famous Anfield night