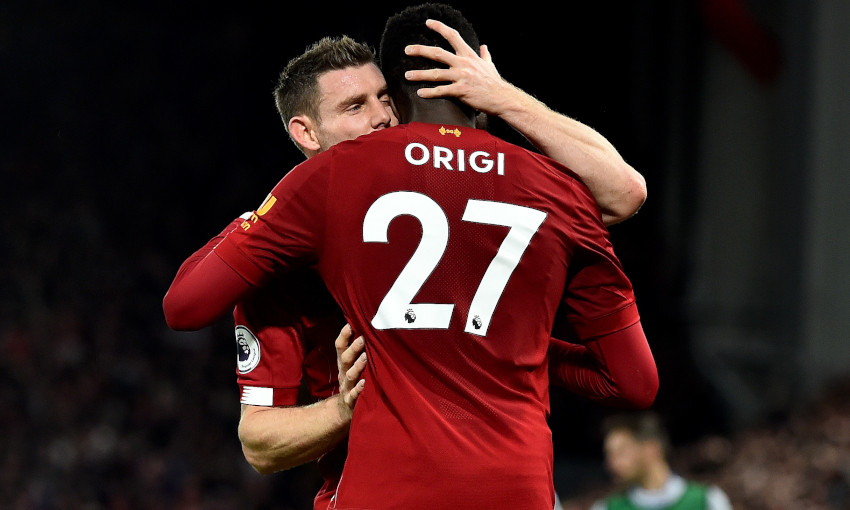 Liverpool claimed a comprehensive 5-2 win over Everton at Anfield on Wednesday night.

For Klopp and his Liverpool players, there will have been no better way to do it. No better way to end a decade of Merseyside derby dominance. No better way to bring up a new club record. No better way to reassert yourself as the Premier League's top dog. This 5-2 drubbing of their most fierce and historic rivals now sees the Reds unbeaten in 32 matches in the top flight. It was surely made all the more sweeter by the identity of the opponent here at Anfield. Liverpool's longest unbeaten run against any team in the Premier League now stands at 18 games and that will extend into 2020 as Everton's annual Anfield hardship continues. Origi once more made himself the man for the big occasion as he got on the end of a razor-sharp counter-attack inside six minutes to round Jordan Pickford and score his fourth in as many games against Everton. It was this fixture 367 days ago that was the re-birth of Origi's time on Merseyside. Summoned from the bench late on, it was his 96th-minute winner that broke Everton hearts. Twelve months on, he is a Champions League-winning Anfield icon. The standing ovation reserved for his second-half exit was richly deserved. Like Shaqiri, he is another whose contribution will be vital before the season is done and dusted.

The 234th Merseyside derby is one which will live long in the memory. There’s something about Everton which brings out the best in Origi. The Belgian scored twice before half-time, both goals taken superbly, and now has five in derby matches. This was only his fourth league start of the campaign, but it was Shaqiri’s first since January. The Swiss star had only 15 minutes of competitive action this season prior to Wednesday night, but you’d never have known. Shaqiri, like he did in that memorable Champions League win over Barcelona, came out of the shadows to hog the limelight. He scored Liverpool’s second goal, and looked as sharp as he ever has in a red shirt. Adam Lallana and James Milner, too, made contributions having been handed starts. Liverpool’s squad strength is often talked about as a potential weakness, but the evidence is to the contrary. Here, they didn’t even use Salah or Oxlade-Chamberlain, and Firmino and Henderson were needed for only 18 minutes apiece – Firmino still found time to register an assist, by the way.

Origi was already the number one Merseyside derby goalscorer in the current Liverpool squad going the teams’ 234th clash. And so, while few will have expected the Belgian to start this one, it was little surprise when he went on to take his personal tally to five with two excellently taken goals. The first followed an instinctive striker’s move in behind and a deft touch around the ‘keeper, but it was the second that truly showcased Origi’s ability. Dejan Lovren’s ball over the top was pinpoint, but to control it closely and quickly enough to pull off the finish took remarkable skill. He might not always get the chances to show it, but Origi has that in bundles - just ask Everton supporters.