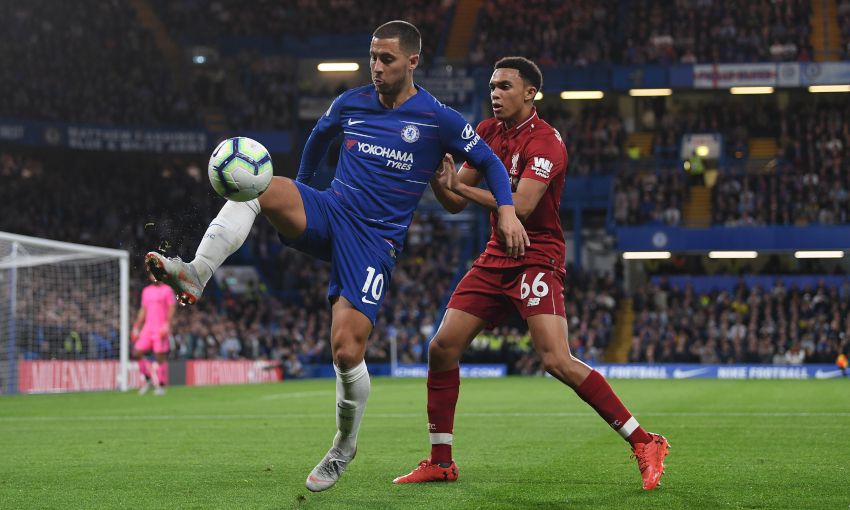 The view from Chelsea... by Blink-182 rockstar Mark Hoppus

Liverpool host Chelsea on Sunday afternoon in a Premier League match which will have implications for both the title race and the battle for Champions League qualification.

With six of the last 11 meetings between the clubs in all competitions ending 1-1, this latest showdown could be decided by fine margins.

Any sense of fraternity between Brazilian compatriots Roberto Firmino and David Luiz will be shelved for 90 minutes on Sunday.

Firmino is coming off one of his most influential performances of the season, in Tuesday’s Champions League quarter-final first leg against FC Porto at Anfield.

He unselfishly laid on Naby Keita’s opening goal before tapping in Trent Alexander-Arnold’s cross for the second at the end of a move he’d played a huge part in, spinning off the left wing and spraying a pass to Jordan Henderson moments earlier.

The No.9 is yet to find the net in five Premier League appearances against Chelsea dating back to October 2015, but his excellent form at Anfield of late - scoring seven in Liverpool’s last six home league fixtures - suggests now is as good a time as any to break that particular duck.

Currently in his second spell at Stamford Bridge, Luiz has been one of the first names on Maurizio Sarri’s teamsheet this season, starting 31 of their 33 Premier League outings thus far and keeping 13 clean sheets in tandem with his usual central defensive partner Antonio Rudiger.

The former Paris Saint-Germain defender is also renowned for his confident attacking forays, notching two goals and two assists in the league since Sarri took charge last summer, but may have to rein in those instincts when faced with the relentless energy of his compatriot’s pressing.

Few midfielders have proved quite as efficient when it comes to winning Premier League midfield battles in recent seasons as 2016-17 Player of the Year N’Golo Kante.

But the diminutive Frenchman could have his hands full against a Liverpool unit that contributed vital goals against both Southampton and Porto.

Deployed in a new role on the right side of Sarri’s three-man midfield this term, Kante’s direct opponent is likely to be man-of-the-moment Keita, who, having gone all season without a goal, suddenly has two in two - following up his header at St Mary’s with a deflected effort that flew into the top corner at the Anfield Road end on Tuesday.

“He found his feet in that game [against Southampton],” stated Jürgen Klopp at his press conference on Friday. “So it made absolute sense to do it against Porto, and he showed a lot of the things which we will see a lot more of in the future.”

Along with Henderson on the opposite flank, the Guinean provided a vital link between midfield and attack in both games, yet managed to maintain his composure on the ball, his pass completion rate of 87.8 per cent bettered only by centre-backs Joel Matip and Virgil van Dijk last Friday night.

World Cup winner Kante’s passing has been similarly metronomic even with the attacking licence afforded him by Sarri this season, completing 85.7 per cent of his passes in the Liverpool half when the sides drew 1-1 at Stamford Bridge earlier in the campaign.

No Premier League player has been involved in more goals this season than Eden Hazard, who has chipped in 16 strikes and 12 assists since the big kick-off last August.

Liverpool fans need no reminder of the threat the Belgian international poses after the brilliant individual goal he scored to decide September’s Carabao Cup tie at Anfield in Chelsea’s favour.

Kopites can be reassured by the fact he will he coming up against a Reds defence that remains statistically the strongest in the division, however.

Whether Sarri fields Hazard in his traditional position on the left wing, or as a lone striker, the No.10’s propensity to drift out wide may well make him Alexander-Arnold’s responsibility on the day, but Hazard will have to be equally wary of what the young full-back can do up the other end.

Sitting on eight assists for the campaign overall, Alexander-Arnold has laid on two goals in the last two games, teeing up Keita against Southampton and Firmino against Porto.

The Kirkby Academy product had 37 touches in the opposition half in the reverse fixture last year, the fourth-highest of any Liverpool player that day, and will hope to maintain his attacking influence along the flank while simultaneously helping to stop Hazard.

Goal of the Day: Roberto Firmino's emphatic winner at Stoke