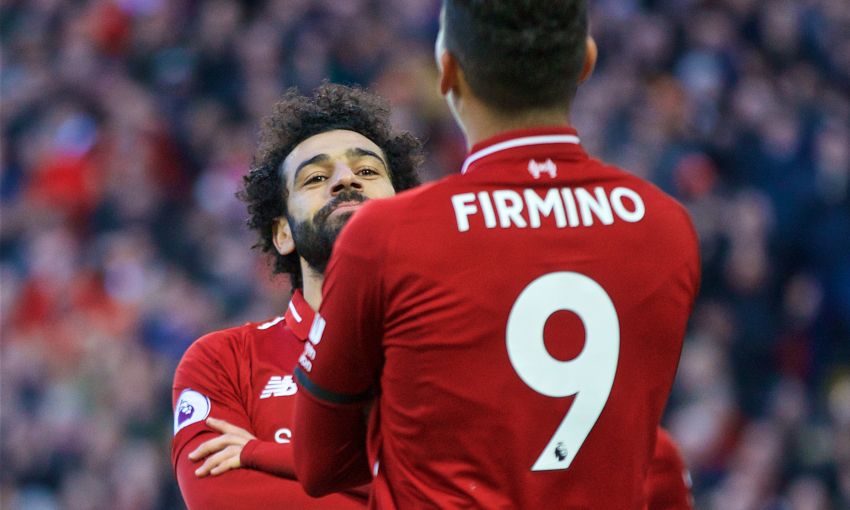 What makes the perfect team goal?

Jürgen Klopp has certainly given Liverpool fans cause to reflect on that question, with Mohamed Salah’s brilliant strike against Bournemouth last weekend the latest addition to a collection of efforts scored after intricate passing moves during the German’s tenure.

So, here are 10 of the Reds’ standout team goals under Klopp so far...

Liverpool started the 2016-17 campaign in stunningly prolific form, netting nine in their first two appearances at a redeveloped Anfield. Any of the four goals scored past reigning champions Leicester City during the inaugural match in front of the new Main Stand would have merited inclusion on this list, but we’ve limited ourselves to just one – the outstanding second by Sadio Mane.

With the score at 1-0 to Liverpool, the ball was won back by Jordan Henderson in midfield, played back to Lucas Leiva – appearing at centre-half that day – and recycled. Roberto Firmino laid Lucas’ searching pass off to Henderson, whose perfect lofted pass found Daniel Sturridge breaking in behind the Foxes’ rearguard.

As the Reds’ No.15 took the ball under control and burst into the box, Mane came tearing in off the right wing, Sturridge unselfishly found him with a backheel pass uncannily similar to the one Firmino played last Saturday, and the Senegalese winger’s poked finish looped up off Kasper Schmeichel and into the net.

If his Leicester goal was a slightly scrappy finish to an otherwise sublime move, Mane provided something even more satisfying when West Bromwich Albion became the fourth side to visit the new Anfield just over a month later.

After 20 goalless minutes, Dejan Lovren’s headed clearance was gathered by Adam Lallana and spread out to auxiliary left-back James Milner, whose forward pass was impudently dummied by Philippe Coutinho into the path of Emre Can.

As the German international charged at the retreating Baggies backline, Firmino and Mane spread out left and right, Can eventually choosing to play in Firmino, whose arched cross to the back post was perfectly judged to drop agonisingly over the head of West Brom defender Allan Nyom and onto Mane’s right boot for a cushioned volley.

A wintry Wednesday night at the Riverside Stadium next, when a Lallana-inspired Liverpool notched the first of four consecutive Premier League victories.

The impressive Lallana netted the first and third goals against Aitor Karanka’s Middlesbrough but was content to play a supporting role for the goal of the night. Nathaniel Clyne’s infield pass found Mane, whose deft flick around Marten de Roon opened up space in the centre of the park.

A succession of quick, short passes involving Mane and Georginio Wijnaldum then dazzled the Boro defence before Lallana’s low cross from the right was swept in by Divock Origi.

Middlesbrough were the unfortunate victims of another three goals – including another fluid move – six months later on the final day of the season.

With fourth place and Champions League qualification at stake it could have been a very anxious afternoon at Anfield, but Wijnaldum assuaged the nerves of the home crowd in first-half stoppage-time.

The No.5 collected a pass from Lovren, moved the ball on to Clyne and got on his bike. When Clyne’s pass to the edge of the box was met with a typically nonchalant flick round the corner by Firmino, Wijnaldum was the third man running, taking the ball in his stride and booming a finish into the top right-hand corner of Brad Guzan’s net for his sixth goal of the season.

To make sure they fully reaped the rewards of that Middlesbrough win, Klopp’s side had to get the better of a Hoffenheim outfit led by highly-regarded young coach Julian Nagelsmann in the Champions League qualifiers.

After winning the first leg 2-1 in Germany some teams would have been tempted to sit back in the second leg, but the Reds instead produced one of the most scintillating 45 minutes of football seen during Klopp’s reign, crowned by a goal that, even on this list, stands out as something special.

Three minutes after Salah had scored his first Anfield goal to make it 2-0 on the night, Firmino popped the ball off to Wijnaldum inside the Liverpool half and the midfielder hit a wonderful first-time pass that prised the visiting defence open and released Mane down the left. As a host of red-shirted attackers descended on the box, Mane feigned to hit it, but instead backheeled into the path of Firmino, the Brazilian somehow having made up the ground to dink a cross to the back stick, where Can was arriving to thump home his second goal of the night.

“That’s football!” Klopp was filmed shouting on the touchline. Quite.

The formula of working the ball over to the left wing then delivering a cross for someone arriving off the right wing to finish was becoming a familiar one by December of that year, but when it’s executed as well as it was at the Amex Stadium, it’s nigh on impossible to defend.

Again demonstrating their ability to strike quickly when the opposition is reeling from conceding, Liverpool stormed upfield 79 seconds after a Can header had broken the deadlock, Lovren’s long clearance knocked into Salah’s path by Firmino, spelling immediate danger for the hosts.

The Egyptian slid Coutinho in down the left and the little playmaker’s wicked low cross was ideally placed for his compatriot Firmino to sidefoot beyond Mat Ryan.

It took just four days for Firmino to repay the favour, as the Reds racked up a second 7-0 win in four Champions League games to guarantee their place in the last 16.

With Liverpool already leading the Russian champions thanks to Coutinho’s early penalty at the Anfield Road end, Mane drove over the halfway line in the 15th minute and fed Salah on the edge of the box. Having drawn two defenders to him, the Egyptian immediately deposited the ball to Firmino.

It was a situation where 90 per cent of strikers would have shot, but the No.9 selflessly played a reverse pass to the onrushing Coutinho, who coolly found the bottom corner with his left foot.

Not the beginning of a pub quiz question but the list of those involved in Liverpool’s superb second goal when they swept Newcastle United aside last spring.

It was another demonstration of how a seemingly innocuous passage of play can rapidly become something much more dangerous where Klopp’s Liverpool are concerned, the move culminating with Firmino’s neat flick and Mane’s assured finish.

Last month’s title race six-pointer against Manchester City was a frenzied, fast-paced affair, but amid all the chaos Liverpool managed to construct a beautifully intricate goal.

Trailing 1-0 with just over 25 minutes to play at Etihad Stadium, Klopp’s men calmly passed the ball back and forth and from left to right until the space opened up, in a move that encompassed seven outfield players.

Eventually it was the flying full-backs that found a way through, Trent Alexander-Arnold’s crossfield pass picking out Andy Robertson at the far post for a volleyed assist that left Firmino with the simple task of nodding into an empty net.

The latest addition to the collection came at a point when Liverpool were 2-0 up and putting on the style last Saturday, slicing through the Bournemouth defence with slick passing moves.

Once again it was a situation where many strikers would have shot, but Firmino (have we mentioned he’s unselfish?) unsurprisingly chose to backheel it to his mate Salah, who laser-guided a finish into the bottom corner.