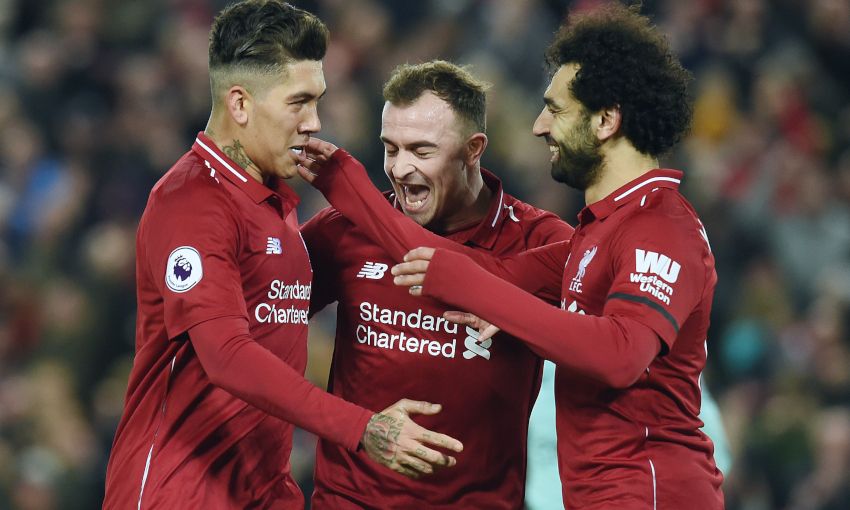 Sadio Mane's strike and a penalty from Mohamed Salah added to an emphatic scoreline for the Reds, who strengthened their position at the top of the Premier League.

They can't say they weren't warned. No sooner had Jürgen Klopp declared that Liverpool had yet to perform to their full potential, his dazzling title chasers proved him right by lifting this remarkable season to new heights. Arsenal were blown away as the box office Reds signed off a memorable 2018 with a bang at Anfield to move nine points clear at the top. They will take some shifting. Unai Emery's men were the last team to find a way to deny Liverpool victory in the Premier League but this time around they were the victims of a ruthless demolition job. A ninth successive league victory was secured with a devastating show of force. This is a team operating to an incredible level in all departments. Firmino walked away clutching the matchball after netting the first hat-trick of his Liverpool career. After a slow start to the season, the Brazil striker has shown signs of getting back to his blistering best in recent weeks and this was the night when everything truly clicked. This was the Firmino who plundered 27 goals last term and established himself as one of the most feared frontmen in European football. Arsenal's defenders will be seeing him in their nightmares. Mane and Salah also got in on the act as Klopp's red arrows delivered their array of tricks - much to the delight of their adoring public. There's individual brilliance in abundance but crucially there's also a collective unity and hunger which is driving Klopp's men on. There was no hint of panic after Ainsley Maitland-Niles put Arsenal in front - the first time Liverpool had trailed in a home league game for 364 days. Instead they kept their composure and roared back to extend their unbeaten league run at Anfield to 31 games dating back to April 2017. 2018 will go down as a year of immense progress from the run to the Champions League final to launching a record-breaking Premier League title challenge.

If Carlsberg did Christmases… The Ryder Cup made an appearance at Anfield today, but Liverpool fans have their eyes on another glittering sporting prize. The Premier League trophy is flickering into view. Get ready for the ride. Arsenal were supposed to provide a test for Klopp's side, a confident, improving top-six rival who would offer a thorough examination of the Reds' title credentials. Examination passed. Liverpool will go into 2019 on top of the pile, at least seven points clear of their nearest rivals after this, their ninth successive league win. If they make it 10 against Manchester City at the Etihad Stadium next Thursday, Reds fans will be booking the month of May off work. Some already have. Unstoppable? They are right now. While their enemies flounder, unable to keep their composure and their consistency, Klopp's side just keep on clearing hurdle after hurdle, ramping up the pressure each time they do. "A long way to go," their manager continues to warn, and rightly so, but what a football team he has built. Twenty games, 17 wins, three draws, eight goals conceded, 48 scored, 54 points. This, in terms of points per game, is the best calendar year in the club's history; 88 points from 37 league matches. Staggering.

Georginio Wijnaldum has a reputation among Liverpool fans as a big-game player, and he did not disappoint in this one. The Dutchman was all over the midfield duo of Lucas Torreira and Granit Xhaka, dominating both in the tackle, often before maneuvering away with a swivel of the hips to put the Reds on the attack. It is telling that Wijnaldum has more appearances than any of Klopp's other central midfield options so far this season. The 28-year-old always delivers for his manager, and it is for that reason that he is sure to be on the team-sheet at Manchester City on January 3. Incredibly, Firmino came into this game on the back of a 262-day wait for a league goal at Anfield. But if the Brazilian was going to end that drought against anyone, Arsenal looked a likely bet. They are now officially his favourite opponent in English football. What is it they say about buses?

It was not even kick-off and it is not even January but the sense of anticipation on Merseyside - the sense that something incredible might happen - is already a feature of daily thought at a club whose followers routinely search for clues as to what the future might hold by looking to signals from the past. It felt like Arsenal were an appropriate opponent, not only because the last time Liverpool were involved in a title race and the race began with a 5-1 victory over Arsenal, but because the victory came in February and the victory for Liverpool still placed them six points behind the new leaders in Chelsea. That reality reflects the unprecedented nature of Liverpool's surge to the summit of the table this time. There is no element of this team that can leave the most interested viewer wheeling backwards, thinking about where it has gone wrong before. It is significant that the message from Klopp is a dogmatic one, relating to "the moments where we suffer setbacks" because prior to this game in the league, the last palpable setback was many months ago at Chelsea where Liverpool's patience was eventually rewarded by a spectacular late equaliser. There are sights that symbolise the way this Liverpool is, sights like Mane chasing after Lucas Torreira like a bloodhound and feeding Firmino, who foot-stepped his way past a series of markers before giving Liverpool the lead. There are other sights, though, ones like Virgil van Dijk hunting down Sokratis Papastathopoulos in the tunnel at half-time like a policeman chasing a local bully, after the Greek had tried to intimidate Mohamed Salah, having ceded a penalty moments earlier. Liverpool were already 4-1 ahead and they had, after all, conceded. But not much escapes Van Dijk and not much gets past Liverpool.