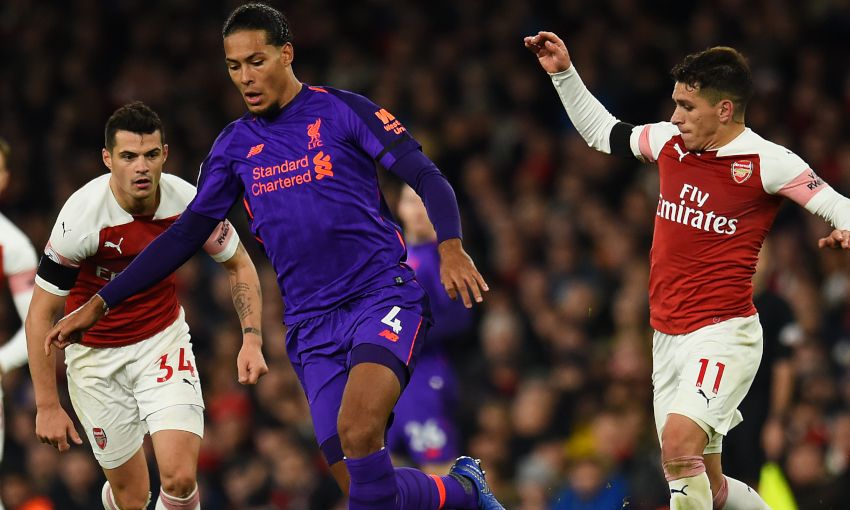 Liverpool and Arsenal played out an absorbing 1-1 draw at Emirates Stadium on Saturday evening.

The 50th goal of James Milner's Premier League career was cancelled out by Alexandre Lacazette on a day when the defensively dominant Virgil van Dijk might have scored a hat-trick.

Liverpool left the Emirates top of the table but with a nagging sense of what might have been. Jürgen Klopp's side were agonisingly close to securing the kind of statement victory which would have reverberated at the Etihad. Milner looked set to be the unlikely hero before Alexandre Lacazette's late strike salvaged a point. Regrets? The Reds had a few. They hit the woodwork twice, Sadio Mane had a perfectly good goal wrongly chalked off and a number of other gilt-edged chances went begging. But it's a mark of how far they have come under Klopp that leaving North London with a share of the spoils felt underwhelming. In the cold light of day this should feel like a point won rather than two lost. Liverpool weren't at their sparkling best and they ran into an impressive Arsenal team who have been transformed by Unai Emery. No team has caused Klopp's Liverpool this many problems so far this season. Virgil van Dijk was a colossus at the back and Joe Gomez also excelled as the Reds, who had just 38 per cent possession, worked tirelessly to keep the hosts out. There were spells when Klopp's men were rocking but they refused to buckle. This title challenge is built on strong foundations and that defensive solidity was crucial here. Liverpool emerged frustrated but with momentum firmly intact.

Arsenal, fairly, will feel they merited a point here. Liverpool, meanwhile, can reflect on a useful point away from home at a top-six rival. For Klopp, though, there will be frustration at his side’s inability to see the game out following Milner’s second-half strike. The Reds have equalled their best ever start to a Premier League campaign, but they could well have bettered it. They will rue a few key moments here: a Mane goal incorrectly ruled out in the first half; efforts against the woodwork from Roberto Firmino and van Dijk; and a headed chance for the latter after the break at 1-0. In the end, though, they were punished by Lacazette’s fine 82nd-minute finish. Arsenal remain in touch with the leading pack, their unbeaten run under Unai Emery extended to 14 games in all competitions. They remain the kings of the second half, with 19 of their 25 league goals coming after the break so far, and 10 of their last 11. In the grand scheme of things, Liverpool will accept a point from a difficult away fixture such as this. There was much to admire about the way in which Van Dijk and Gomez mopped up defensively, and in the persistence of Andy Robertson in getting forward from left-back. The Scot’s battle with Hector Bellerin was one of the game’s more intriguing sub-plots.

The applause from the home support upon the final whistle told its own story. Arsenal had gone toe-to-toe with Liverpool throughout. The evolution under Emery is plain. Liverpool did not know what to make of it. They had seen what would have been an 18th-minute Mané goal contentiously disallowed for offside while the centre-half van Dijk could have had a hat-trick. The first of his chances was the best and he hit the post with the second. For all of their front-foot football, Arsenal did not have the same number of clearcut opportunities. Klopp’s team were in control at 1-0 on the back of James Milner’s goal and it is always a bitter pill to be pegged back late on. But, as their manager noted, a draw at Arsenal is “absolutely a good result”. Liverpool remain unbeaten in the Premier League.

Milner has never lost a Premier League match that he has scored in. It’s some record and it’s a testament to the professionalism for one of English football’s longest serving and hardest working players. Against Arsenal he proved he still had it, in case anyone was wondering. The 32-year-old was everywhere, not a patch of grass at The Emirates was left untouched by the tireless midfielder as he charged about his business. When Leno’s parry was cleared to Milner’s path on the edge of the box, there was one thing on his mind and his finish was one that most players would be proud of. He kept his cool, got over the ball and riffled a shot into the back of the net to cap off a fine display.

The visitors were perhaps unlucky not to take more from a game that saw them twice hit the post and have a goal chalked off incorrectly for offside. But, when the dust settles, Klopp will no doubt view the extension of his side’s own unbeaten Premier League run as cause for celebration. Surrendering a lead late in the day is never a nice feeling, but Liverpool shouldn’t be too disappointed with a point at Arsenal. The Gunners remain unbeaten since August, and possess one of the deadliest attacks in the Premier League - holding them at home is no mean feat. As for the Reds, they remain unbeaten in the top-flight so far and moved top - even if just temporarily - with a point here. Winning these top-six clashes at Anfield will be crucial, but denying such opposition three points on their own turf is not to be sniffed at.