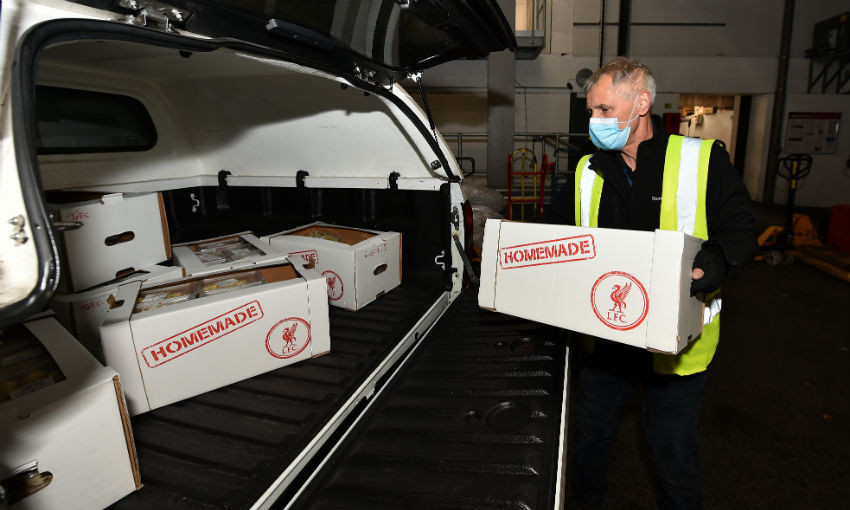 Liverpool FC’s community programme, Red Neighbours, provided 160 food hampers to local families this week – alongside the club’s 1,000 free meals – as part of its long-term support of its communities.

Since its launch in January 2017, Red Neighbours has helped thousands of local families in need through regular initiatives such as breakfast clubs, food education classes and its partnership with Fans Supporting Foodbanks.

Food poverty and education was identified as one of four key areas of need following extensive research with key people who live and work in L4 and over the last three years, the club has offered continued support to those most in need in the local area.

Throughout this week’s half-term break, breakfast food hampers were delivered to families in the Anfield and Kirkby areas, via 28 local schools, as part of the programme’s ongoing ‘Breakfast Clubs to You’ initiative.

Prior to the COVID-19 pandemic, Red Neighbours welcomed families to Anfield each school holiday for breakfast clubs, which included a cooked meal, activities and live music. As a result of current restrictions, ‘Breakfast Clubs to You’ was launched to ensure the club can continue to support those in need in the local area.

Each breakfast pack includes items such as bread, milk, eggs, cereal, fruit and much more, feeding a family of four for up to five days.

Offering a seasonal twist in the lead-up to Halloween, the Red Neighbours team also included a pumpkin soup recipe – assembled by the chefs at Anfield – with the ingredients provided to help families cook together over the half-term holidays.

The club also continues to produce and deliver 1,000 meals per week to those in need in the local community as part of its COVID-19 recovery response work. Since March, more than 27,000 free meals have been provided to those living in food poverty throughout the local community.

Forbes Duff, Red Neighbours senior manager, said: “We have been supporting local families as part of our half-term breakfast clubs for three years now and despite COVID-19 restrictions, we’re pleased to be able to continue providing food parcels to those most in need in our local communities throughout the holidays.

“We would have loved to welcome families into Anfield as usual for our half-term breakfast clubs this week, but as that’s not possible at the moment, we have adapted our initiative to allow us to still offer our support to those who need it.”