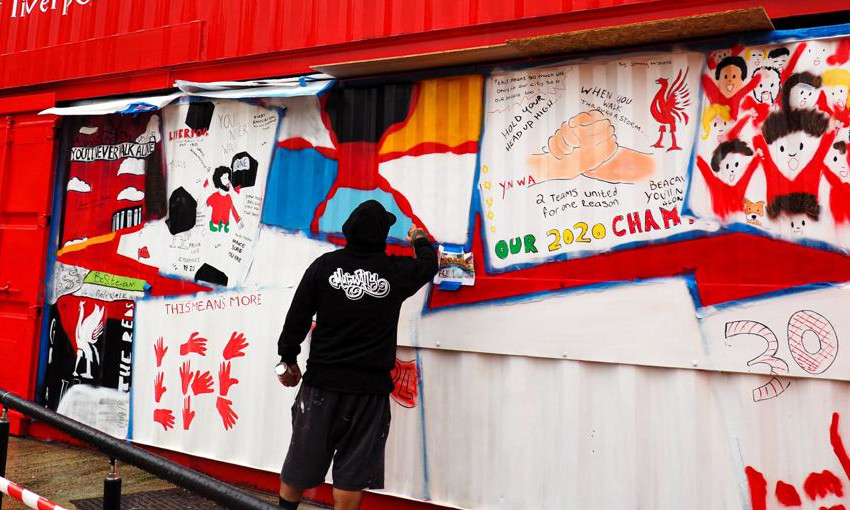 LFC to continue providing 1,000 meals per week for the local community

Schools and care homes that work with the club’s community team, Red Neighbours, and its official charity, LFC Foundation, were asked to draw, sketch or paint a unique design which symbolises what the Reds being crowned champions means to them, their friends, families and local community.

Each mural, which is centred around the theme ‘We are Liverpool. You Are Our Champions’, has been developed in recognition of the ongoing support from the club’s local communities throughout the 2019-20 season.

The artists at MurWalls carefully and skilfully translated the best designs into two community murals, and work on both designs started last week.

One mural will be located underneath LFCTV’s container on Anfield Road and the other will be situated at Northwood Community Centre in Kirkby.

Support for the elderly and creating memorable experiences for young people form key areas of focus for the Red Neighbours programme, alongside food poverty and the promotion of physical activity.

Throughout the lockdown period, the team, alongside LFC Foundation, has made more than 950 calls to local vulnerable people as part of the LFC Connect service, and delivered 1,000 fresh meals every week to those unable to leave their homes or without the income to go shopping, as well as community groups, school hubs and key workers, as part of the club’s COVID-19 community response work.

Forbes Duff, Red Neighbours senior manager, said: “It was a pleasure to get our residents involved in this initiative following the club’s Premier League success.

“With these two murals, we want our local communities to know that the club’s recent success is a reflection of their ongoing support and dedication throughout the years.

“At this football club we are a family, and we hope that these community murals represent that.”

LFC Foundation, which is based in Anfield, works with more than 8,500 schoolchildren in 24 schools across the Liverpool City Region each year through its successful schools programme.

Matt Parish, LFC Foundation director, added: “This is an exciting and expressive project that has allowed us to engage with our partner schools during a very difficult time to produce a beautiful and celebratory piece of artwork.

“We really want our local communities to realise the important role that they play in our success and this project allows us to acknowledge them in two permanent murals.”

To find out more about LFC’s community projects and recent news, click here.

LFC to continue providing 1,000 meals per week for the local community