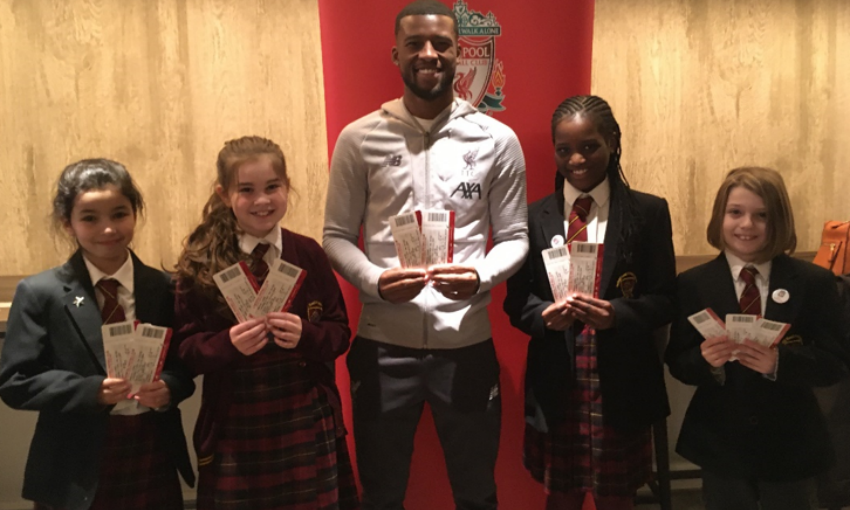 Georginio Wijnaldum surprised a group of local school pupils at Anfield this week.

The Liverpool midfielder met with 20 unsuspecting children at the stadium as part of Red Neighbours’ focus on creating memorable experiences for young people.

The pupils, from four schools in the L4, L5 and L6 areas, were invited to Anfield to collect their school’s allocation of free tickets for the Premier League clash with West Ham United later this month - and they were met by a very special guest.

After surprising the youngsters and handing over the tickets, Wijnaldum posed for photos with each group and answered their questions.

The Dutchman said: “It’s a pleasure to give back to the local kids through the club’s Red Neighbours scheme.

“All of us in the team love getting out into the community to spend time with our fans - surprising the kids with tickets for a game and seeing the looks on their faces was very special.”

More than 1,000 free match tickets will be donated to local schools during the 2019-20 season as part of Red Neighbours’ free tickets for schools’ scheme.

Fifty-five tickets are provided for each Premier League home game, with 21 primary and four secondary schools in the L4, L5 and L6 postcodes benefiting across the season.

Gayle Hall, careers coordinator at Notre Dame Catholic College, said: “Our pupils are over the moon to receive tickets for Liverpool’s next home game against West Ham.

“For them to see a game at Anfield is a dream come true and the visit from Gini Wijnaldum was the icing on the cake.

“It’s something that the kids will never forget - we can’t thank Red Neighbours enough for their continuous support.”