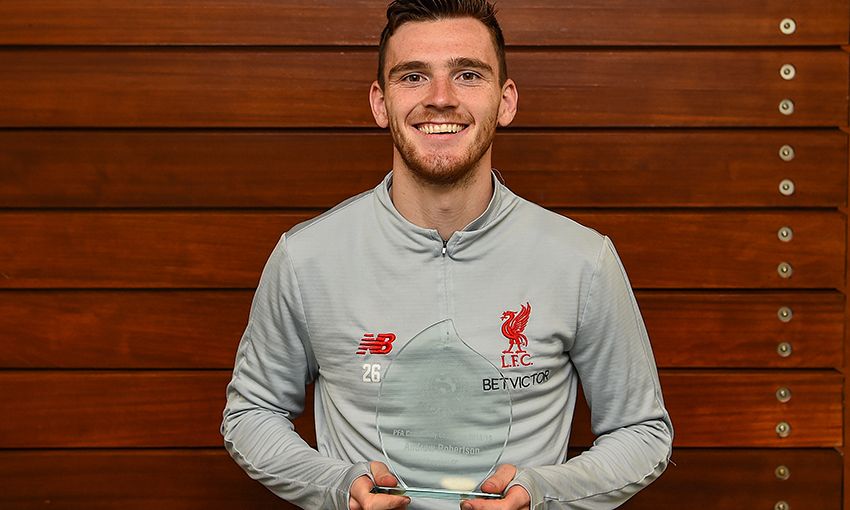 The award aims to raise awareness of the support PFA members provide to their club’s community initiatives throughout the season.

Robertson was recognised for his ongoing support of Liverpool's work in the local community - in particular his backing of the Fans Supporting Foodbanks collections facilitated by Red Neighbours.

Forbes Duff, corporate social responsibility manager at LFC, said: “Andy has made a huge difference to our Fans Supporting Foodbanks collections this season.

“He has not only taken the time to understand how the North Liverpool Foodbank operates and the role it plays in the local community, but he has really got behind the fan appeals and made a massive impact on the number of donations.”

Andy first visited North Liverpool Foodbank back in November to learn more about the community’s growing reliance upon foodbank parcels and the invaluable work of the centre’s volunteers. His visit was captured by LFCTV and a video appeal was created encouraging fans to make donations when attending matches at Anfield.

The Reds’ next home fixture, a matter of days after the video aired, saw the club receive a record-breaking 2.2 tonnes of Foodbank donations, which equated to 5,690 meals and provided 632 people in crisis with three-day emergency food parcels.

John Hudson, PFA’s director of corporate social responsibility, said: "The PFA believes that players who make that extra effort and contribution during the season should be recognised for their support and involvement in the local community.

"The award will hopefully raise awareness of the great contribution and importance many of our members attach to their roles off the pitch. We would like to offer our congratulations to Andy Robertson on receiving this season’s 2018-19 PFA Community Champion Award."