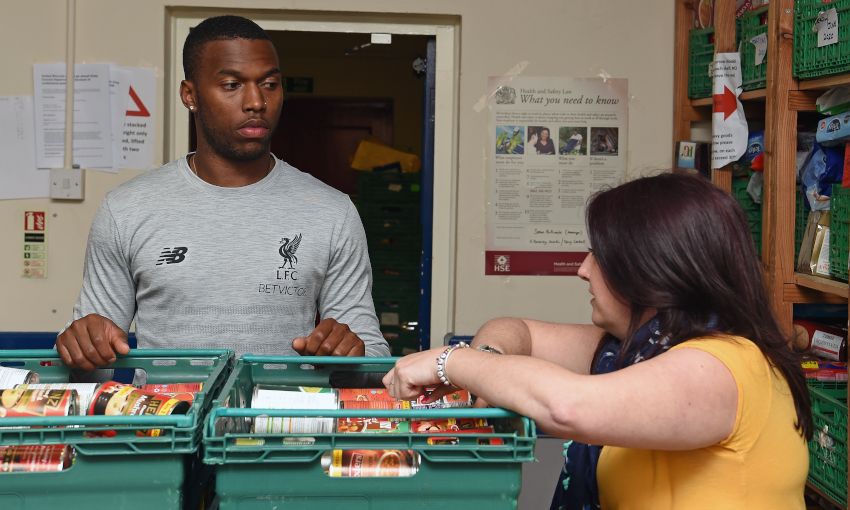 Daniel Sturridge paid a visit to the North Liverpool Foodbank in Clubmoor this week.

The Liverpool striker donated food to the centre alongside the club’s Red Neighbours team, to be used in emergency food parcels which help to support local families living in food poverty.

According to national foodbank charity Trussell Trust, the use of foodbank parcels nationally has risen by 73 per cent in the last five years, with 1.6million food parcels provided in the past year alone.

“It has been eye-opening to come here and learn about the work that the North Liverpool Foodbank does and the high number of families in Anfield that access their vital support,” said Sturridge.

“But it’s also great to hear about the difference that our fans are making by donating at each Anfield matchday.”

On matchdays, fans are encouraged to donate what they can at the Fans Supporting Foodbanks’ collection points on Anfield Road, the Anfield club store, and the Homebaked co-operative bakery on Oakfield Road.

Fans Supporting Foodbanks, which is a partnership between the Liverpool supporters union Spirit of Shankly and the Everton Supporters’ Trust, now accounts for a quarter of the intake of food at the North Liverpool Foodbank.

Foodbank donations can be made at St Andrew’s Community Network, 16 Larkhill Lane, L13 9BR (9am-5pm, Monday to Friday) or at your local supermarket collection point.