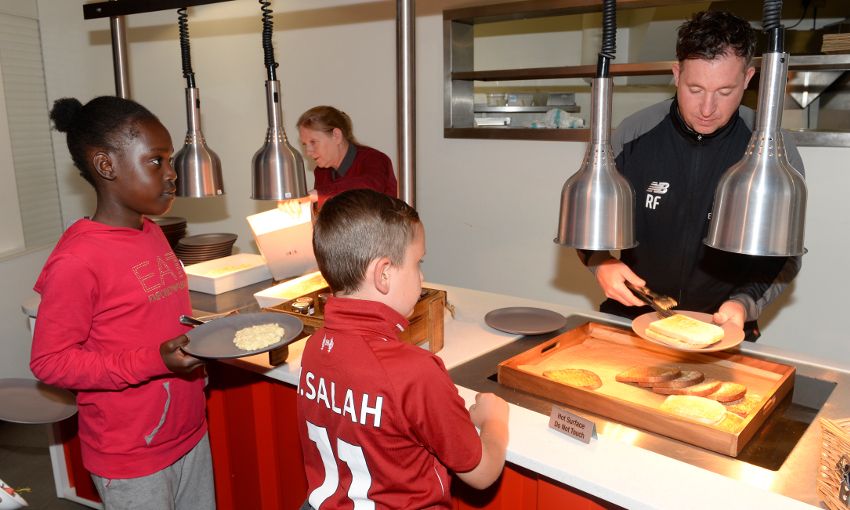 The former striker called into Red Neighbours' holiday club - which runs at the stadium for three weeks throughout the summer break - to meet with residents and lend a hand with serving food.

Fowler spent the morning chatting with local children and their families – talking of his time as a player, the hard work and dedication it takes to be successful, and his love for the city and its people – before drawing the LFC-themed raffle and handing out prizes.

Robbie said: “I'm a born and bred Liverpool lad and the people here have always been so good to me, so it’s great to come along to things like this and spend time with the local community.

“We are lucky enough to travel the world with LFC and meet so many fans along the way, but it's so important to give something back to those at home as well.

“The work the Red Neighbours team are doing in and around the Anfield area is fantastic, and it’s brilliant to see the local kids and their families having these unforgettable experiences at the club."

Over 60 residents from the L4, L5 and L6 areas – many of whom were visiting Anfield for the very first time – were served a warm, healthy breakfast followed by a morning of games, singing and dancing, and a private tour of the stadium.

LFC's official family partner, Joie, contributed to funding the breakfast clubs and donated a number of gifts for the raffle, including the star prize - an LFC branded Duallo car seat.

Food Poverty and Education is one of Red Neighbours’ four main areas of focus, alongside Creating Memorable Experiences for Young People, Support for the Elderly Community and Encouraging a Physically Active Community.

It is estimated over 450 local residents will attend the breakfast clubs before their conclusion at the end of August.