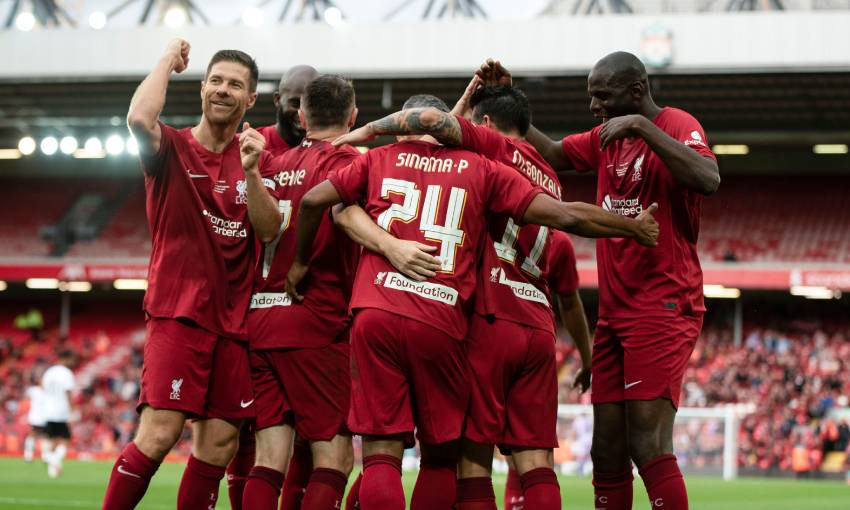 Liverpool FC Legends won the Legends of the North crown after beating their Manchester United counterparts 2-1 at Anfield on Saturday.

Holding a 3-1 advantage from the first leg in May, the Reds came from a goal down to win the LFC Foundation charity match thanks to efforts from Mark Gonzalez and Florent Sinama-Pongolle.

Gonzalez's effort in the 47th minute cancelled out an early opener from Dimitar Berbatov, before Sinama-Pongolle clinched victory with a well-taken finish towards the end.

The hosts fell behind with just seven minutes on the clock.

A switch of play from Michael Carrick was nudged into the path of Berbatov by Danny Pugh, with the United striker's first-time finish leaving Jerzy Dudek with no chance.

Xabi Alonso, spraying passes all over the park like he did in his five seasons with the Reds, nearly helped produce a quick response, though Momo Sissoko's header from his cross flew just over the crossbar.

Maxi Rodriguez and Fabio Aurelio then went close to equalising but had efforts that were kept out by United goalkeeper Raimond van der Gouw.

Shortly before the end of the first half, Anthony Le Tallec volleyed just wide after another spectacular crossfield pass from Alonso.

The pressure finally told, however, and Liverpool drew level just after the restart.

Robbie Keane pounced on a loose ball in the final third and immediately squared to the open Gonzalez, who kept his cool in front of the Kop to beat Van der Gouw.

The goalscorer nearly returned the favour to his assister moments later, but Keane's header was just about kept out by Van der Gouw.

Aurelio then made a late dash into the box and watched his header flash the wrong side of the post, while at the other end Sander Westerveld produced a stunning save to deny Ronny Johnsen from a corner.

But Sir Kenny Dalglish's side did manage to get in front seven minutes before the end.

Luis Garcia's ball into the penalty area in search of Keane was only half-cleared to the edge of the box, where Sinama-Pongolle was positioned to send the ball into the bottom corner of the net and secure the win.