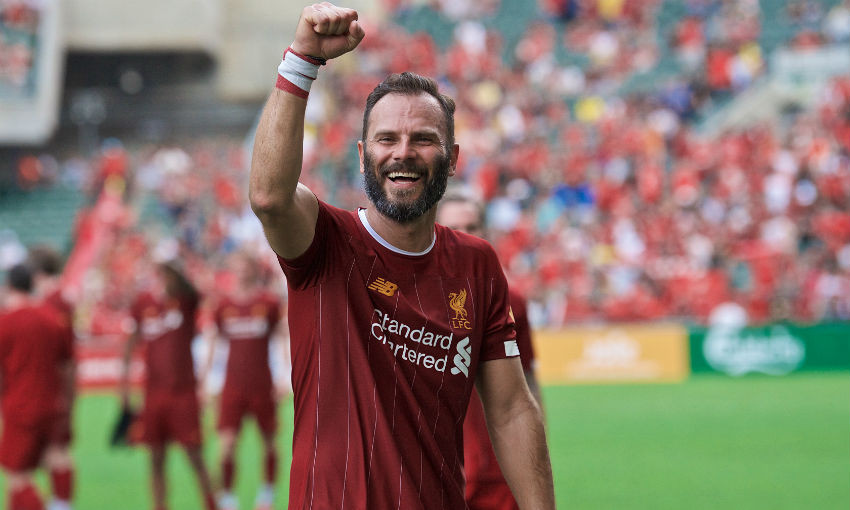 First-half goals from Luis Garcia, Patrik Berger and Emile Heskey decided the encounter in the Scottish city of Glasgow that was played in front of 30,488 spectators.

Ian Rush managed the Liverpool side featuring the likes of Jamie Carragher, Dirk Kuyt, Glen Johnson and Rangers first-team boss Steven Gerrard, who turned out for both teams.

Free video: Watch all the goals at Ibrox

The former skipper represented the Reds in the first half and was jokingly booed by the home crowd as he registered the match's first shot on target inside three minutes.

The visitors conceded a penalty minutes later when Carragher brought down Kris Boyd. Boyd stepped up from 12 yards out but ended up dragging his effort wide of Jerzy Dudek's right post.

The deadlock was broken when Kuyt sent an inviting cross into the box that was met by Garcia's diving header, with Neil Alexander unable to keep it out.

Berger then doubled Liverpool's lead after a counter-attack from Kuyt and Gerrard saw Garcia pick up the ball in the box and square for the eventual goalscorer.

Rangers pulled one back in the 25th minute when Boyd made amends for his earlier miss, converting Lee McCulloch's neat through ball.

Goals for either side were then netted within seconds of each other.

Liverpool's two-goal advantage was restored as Heskey delicately dinked over Alexander, with Gerrard claiming the assist. But that was quickly wiped out when Peter Lovenkrands pounced on loose control from Johnson.

Both teams squandered opportunities towards the end of an entertaining opening 45 minutes. Thomas Buffel missed from yards out, while Gerrard was denied by the post from close range.

After a fast start to the second period, the affair slowed down somewhat and chances were few and far between.

Rangers stopper Alexander repeatedly denied Liverpool from adding to their lead with a string of impressive saves.

There was a standing ovation from all four corners of Ibrox in the 75th minute when Gerrard was replaced by David Thompson and headed straight down the tunnel.

He emerged moments later decked in blue to a rapturous reception and completed the remaining nine minutes for Alex McLeish's team.

Alex Rae grazed the top of the crossbar for Rangers in the dying moments, but the Reds held on to the result.