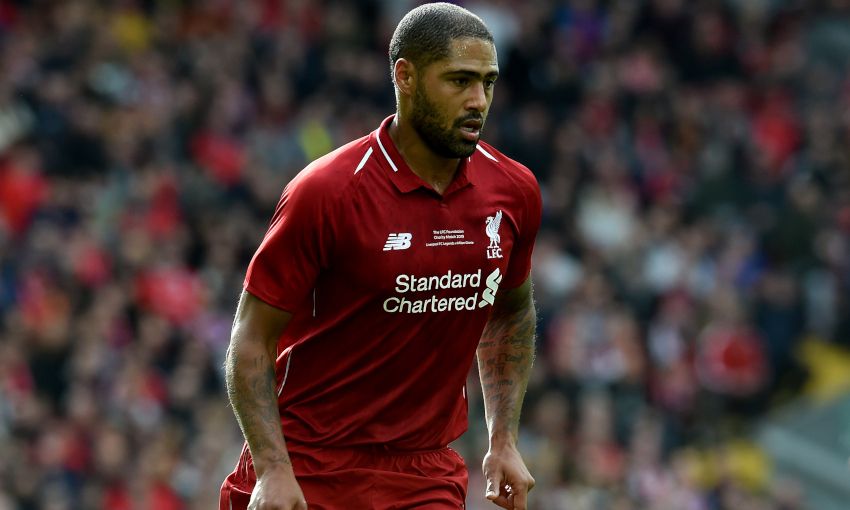 Glen Johnson described the ‘great buzz’ returning to Anfield and making his first appearance for Liverpool FC Legends gave him on Saturday.

The former Reds defender took part in the charity match against Milan Glorie, helping the hosts to a dramatic 3-2 victory thanks to Steven Gerrard’s late winner.

It was the first time Johnson had represented the club’s legends team after retiring from professional football in January.

“It was good, I enjoyed being back at Anfield and the crowd seemed to enjoy themselves,” he told Liverpoolfc.com following the final whistle. “I’ve got off to a winning start, so it’s nice to be back.

“There were no nerves, just excitement – and a bit of caution, wondering how my body was going to cope with it! Once you get into it, it’s enjoyable and the lads played some good football.

“I’ve done some fitness work, but I’ve not kicked a ball since my last game, so it’s been a while – and that’s what I was a bit nervous about! I’ve stayed fit, but then there’s being fit and being football fit, which is different.

“You appreciate everyone is pretty much in a similar boat, so there’ll be a lot of aching bodies now – and certainly in the morning – but it was good to look up and see some of the names on the pitch.

“Even when you’re at the top of your game and you’re playing against those guys, it means everything at the time. It was great to be back on a pitch with those sort of players and against those names – it gives you a great buzz.

“It brings back a lot of memories – fond memories. I had great times [here] over the years.”

Johnson made 200 appearances for Liverpool and scored six goals between 2009 and 2015, when he departed Anfield to join Stoke City.

After three-and-a-half seasons with the Potters, the 34-year-old announced in January he would be hanging up his boots.

“Of course, I wish I could play football forever, but I knew that wasn’t the case so I made the choice to retire – it wasn’t my body telling me,” Johnson explained.

“That made it easier for me to step onto the other side and get on with other things in life because it was my decision, rather than the game being taken away from me.”

LFC Legends to face Celtic Legends at Anfield in March 2023