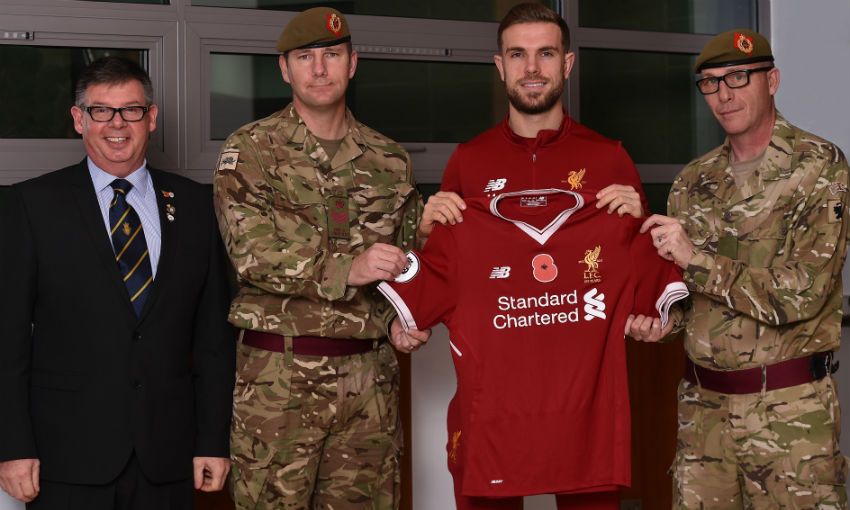 Liverpool captain Jordan Henderson made a special presentation to the Poppy Appeal at Melwood, which will help raise funds for the Royal British Legion (RBL).

Henderson handed over 23 signed poppy shirts, which the Reds proudly wore during their 3-0 win over Huddersfield Town at Anfield on October 28.

All 23 shirts are now available to bid for on eBay and all monies raised will go towards providing essential care and support to serving members of the Armed Forces, veterans of all ages and their families.

Reds skipper Henderson said: "It’s important for the team to have the opportunity to wear the poppy on our shirts to show our respects. We are extremely thankful for the amazing work that the armed forces do and for the sacrifices they make to serve our country. Their bravery makes them real life heroes.”

Martin added: “For the past eight years we have received an incredible amount of support for the Poppy Appeal from Liverpool Football Club and their fans and I would like to thank them on behalf of the Royal British Legion.

“This backing is so important and helps us to raise vital funds to enable us to continue delivering essential work to serving members of the armed forces and ex-personnel across the Merseyside region and beyond.

"Last year, the shirts donated from the Watford fixture raised over £13,000 for the Poppy Appeal and it would be fantastic if we can match or even better surpass this.”

To bid on the signed jerseys, please click here.

The auction will be open until Sunday December 17 at 8pm GMT.