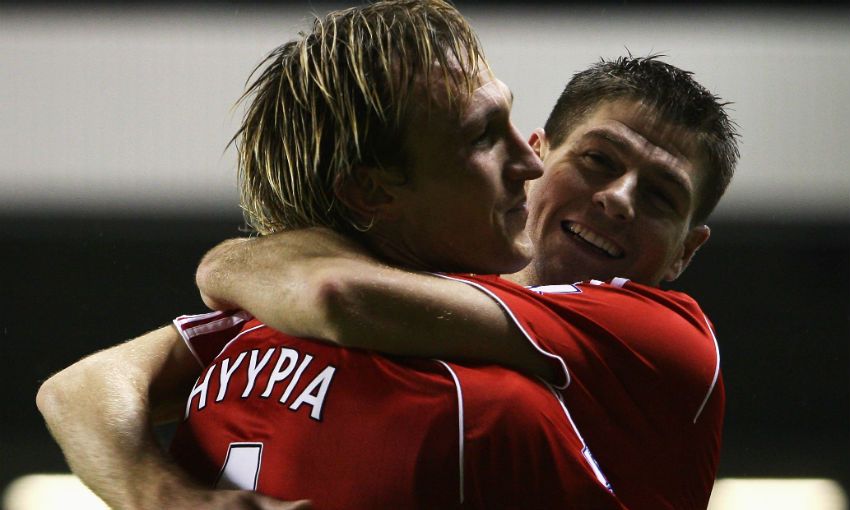 Sami Hyypia believes Steven Gerrard becoming the captain of Liverpool was a key factor behind their success together at Anfield.

Liverpoolfc.com caught up with Hyypia at a ceremony in London earlier this week, where Gerrard was presented with the 2017 Legend of Football Award.

The Finn, who played alongside the Reds icon for 10 seasons, discussed his former teammate’s playing career as well as his future in management, and was full of praise for the man who succeeded him as club skipper in October 2003.

“There are not enough words to describe Stevie as a person and as a football player. It’s my honour to be at an event like this,” Hyypia said.

“He was my teammate for a long time and I got to know him very well.”

Exclusive: Sami on his memories of Stevie

Hyypia and Gerrard won six major trophies during their time together at Anfield, but the former’s favourite memory of the ex-midfielder is the way in which he took on the responsibility of the captaincy at the age of just 23.

“There are so many memories. He scored very important goals for us, but for me the most special memory was when the captaincy went to Stevie,” he continued.

“I will remember that morning for the rest of my life, the way it went. I think when he got that armband, mentally he stepped onto another stage and made a huge leap forward. That made him who he is today.

“I think I said to him he deserves it. I didn’t have any bad feelings about passing the armband on. It happens sometimes and it’s not too bad to give it to a player like Gerrard.”

Gerrard took his first steps into management by taking charge of the Reds’ U18s in the summer, and Hyypia - who has managed Bayer Leverkusen, Brighton and Hove Albion and FC Zurich since retiring as a player - respects his decision to go into coaching.

“Nowadays you don’t know who is suited to the role and who is not. It doesn’t matter who you are, if you are not winning football games then you are under pressure and you can no longer have that position,” he noted.

“With what I have experienced I admire Stevie’s courage to go into that role and hopefully he will be successful.”