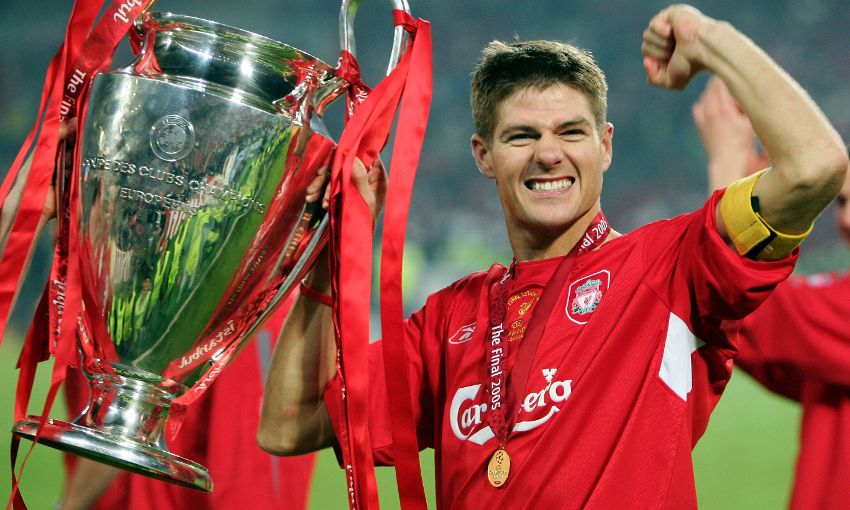 After announcing his retirement from professional football on Thursday morning, Steven Gerrard sat down with Gary Lineker to explain the reasoning behind his decision in an interview with BT Sport.

The 36-year-old called time on his playing career almost 18 years to the day he made his senior debut for Liverpool as a substitute against Blackburn Rovers at Anfield.

Click play on the embedded video below to watch Gerrard’s interview, or read on for a full transcript…

Steven, may I be the first to congratulate you on a truly marvellous career. Why have you decided to call it a day?

There are a few reasons, really. Obviously you are aware of the time coming towards the end and the body starts talking to you – the pains and the aches get more regular. The way you feel out there on the pitch changes. Over the last couple of years I’ve felt myself slowing down a little bit and I basically can’t deliver what I used to be able to deliver, and that becomes a little bit frustrating as time goes on. And also, you know, I’ve listened to people over the years, important people in the game who I trust and have a lot of respect for, have said to me always go when you have a tiny bit left – never overstay your welcome and play on too long where it becomes embarrassing. I can feel that’s not too far away, so now is the right time.

Was there a moment?

Not one moment, I think it was more a period. I think in my last three or four months with LA Galaxy, I was getting too many injuries and I didn’t really feel as sharp as I used to. The games were becoming more challenging, especially with the altitude and heat, the humidity and the travel was affecting me, so it was more a period of time rather than one particular moment. In saying that, I’ve had a few moments in the last six months where I’ve thought ‘I didn’t play well today’ or ‘That guy got the better of me’. And I don’t like saying that to myself, so now is the right time.

Will you miss it?

100 per cent. I’m the type of person who loves playing football, I love the game. I love training on a daily basis, I love competing and I’ve absolutely loved the journey through the highs and lows over the years – I’ve loved every minute of it, so I’m going to miss it immensely.

Describe your emotions about having to retire because it comes to us all in football, so describe how it feels to you…

I think [it feels] very mixed at the moment. I’m a tad sad because I’m not going to be out there on the pitch and I’m not going to be in the dressing room with the boys and all the banter and not going out to compete any more. I’m not going to play in front of those huge crowds and have them incredible moments – the highs that are beautiful as a footballer. So a bit mixed, but at the same time I’m proud and I’m happy. I’ve achieved many, many things that I never thought I would get near. I keep telling myself I’m a young boy from a council estate who had dreams of playing for my hometown club. I keep going back to there and I’m very grateful how it has gone. 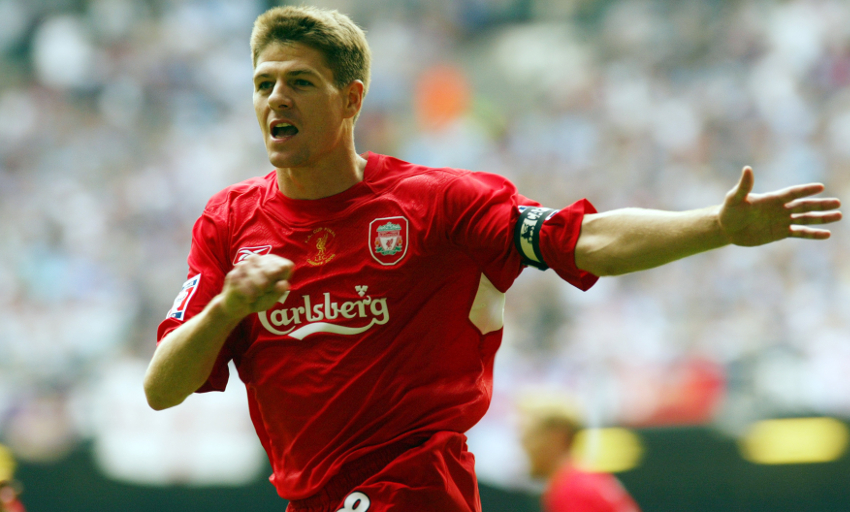 You mentioned your highs, great moments – what was the best of those moments for you?

Given the nature of the game as well, it was an extraordinary final…

Of course. It was a dream just to be involved in the ride and the journey – and to actually get the cup at the end of it. And the game, probably the best Champions League final ever, was a miracle really.

For you personally, you kind of dragged them [the team] back in it, didn’t you? Almost single-handedly…

The nice thing for me was that I contributed during the game. Being the captain, there’s a lot of pressure that I had to deliver in that game. Looking back on it now, I was really pleased how it went. But at the same time along the way, there has been some really brutal lows that have took a lot out of me as well.

Obviously the Chelsea game. That’s one that will haunt me for a long time. The complete opposite to the feelings of the Champions League where you are on this incredible high, and then when you go back to the Chelsea game and it being a pivotal moment, it felt like a disaster happened in my life – that’s how bad it was.

You’re one of the few players, of course, to have played over 100 games for your country – the highs for England?

Every time you put the shirt on representing [your country]. You are asked many times by a lot of children ‘What’s it like to play for England?’ Until you actually put that shirt on for the first time and then do it on a regular basis, it’s difficult to describe. Representing your country and millions and millions of people, that was another dream that I achieved and to do it over 100 times was incredible for me. Looking back over my England career, it’s mixed like most people’s are. You have your 5-1 v Germany result, which you feel really great about, and then you have the [penalty] shootout heartaches when you have missed a penalty, and when under Steve McClaren we didn’t qualify. You have those brutal lows as well, but it’s part and parcel of being a footballer and having that long career – it’s always going to be full of highs and lows. 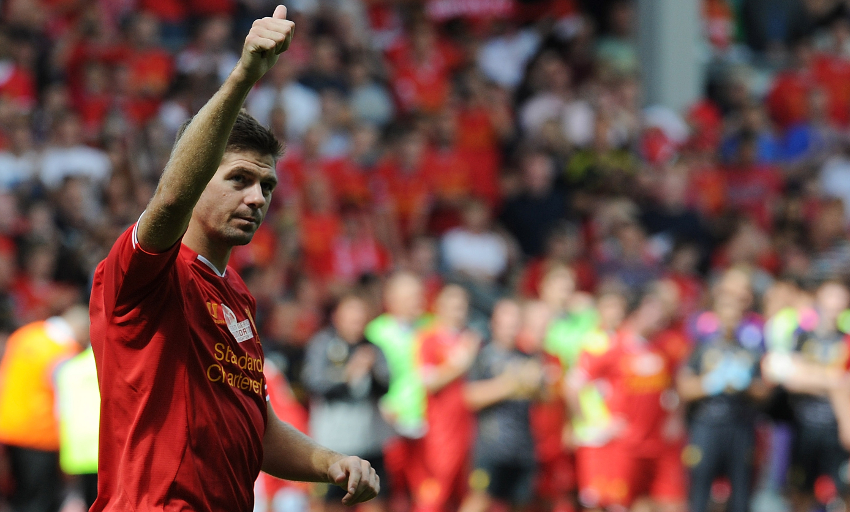 If you look back on your own career, describe your strengths as a player…

If you look at yourself, you might find this easier to answer, have you got a weakness? Was there a weakness in Steven Gerrard’s game?

I think the weakness in my early years, Rafael Benitez pointed that out quite cleverly, was probably discipline in terms of losing my position as a centre-midfielder too easily and also maybe controlling my emotions in terms of getting stupid yellow cards and a few stupid red cards – I’ve let my teammates down on a few occasions. They are the things I will look back on and wish I could go back and correct them things so I could have a totally smooth career, but who is out there that has that perfect career? I’m not sure there are many.

You ended your career at LA Galaxy but predominantly you will always be remembered as a Liverpool player – you played there practically your whole career. Any regrets on that, as you could have moved on a few times? You nearly did, of course, didn’t you?

I’m sitting here now with no regrets with how my whole career went. I got quite a bit of stick along the way about not winning the Premier League, for example, and I look back at the opportunities I had to go to the strongest teams in the league, and I probably would have been sitting here with four or five Premier League medals. I could have gone abroad to the big teams and chased that glory but it’s also satisfying at the same time to know I stayed loyal to the people that are most important to me. I didn’t chase cash and I didn’t chase the glory. Of course, I’m sitting here with that one big regret that I didn’t win the Premier League but at the same time I am very satisfied with my own loyalty.

What does Liverpool Football Club mean to you?

The world. I started supporting the club at a very young age. A lot of my family are Reds. The way the club shaped me and treated me from a young age and turned me into a decent human being and a good footballer, I’ve got a lot to thank them for.

Do you feel you will go into coaching rather than perhaps the television business, for example?

Well, I’d like to do a bit of both, I think. Obviously now I’m really excited to work for BT and cover the Champions League and the Premier League – and that is something I was really looking forward to doing when I returned. In the future, I definitely have dreams and aspirations of having a go at management or assisting a manager and being back involved in the dressing room. But, you know, I’ve got many years to do that. The important thing for me now is to concentrate on [working for] BT and in my spare time around that try to gain some experience. 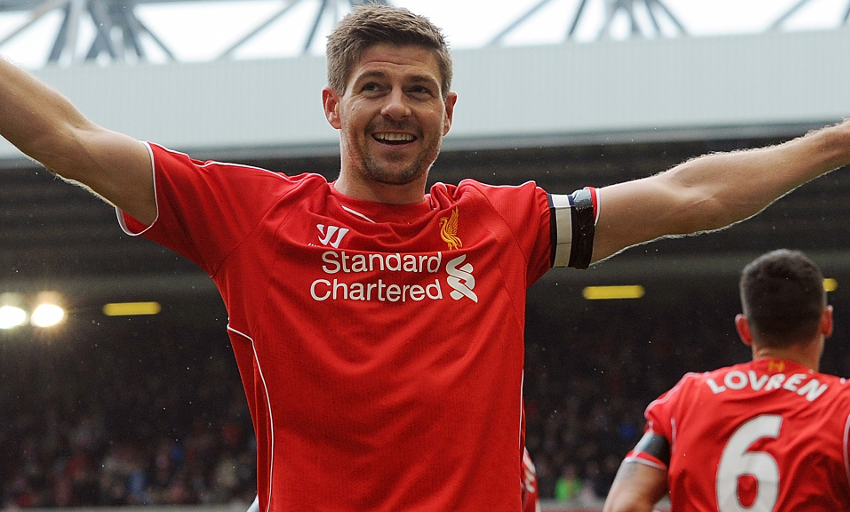 You played under many managers, so who would be the most influential to take into your managerial career possibly?

I think it would be a bit disrespectful to pick one. I’d like to take a little bit from them all, good and bad, because I think you can learn a lot from some managers where you have had a few disagreements or how they have handled certain situations where you feel you would do it different. Rafa Benitez was certainly the best coach tactically that I worked under, but I think you have to do it your way – the way you see the game – and basically you use your experience as a player and the people that you learned off to sort of put that around your own way of doing it.

Best player you played with?

Luis Suarez, by a mile. Phenomenal.

Looking forward, will you be back living here?

I’m going to be back living with my family based in Liverpool.

It’s frustrating when you come to the end of your career and you can’t quite do it anymore isn’t it?

Is it hard, then, making that final decision to finally end it?

Yes, because as I say I’d love to have a few games in the future to play in. I am going to miss it. It’s not as if I’m out on my knees and I can’t move anymore and I could still play at a certain level, but the level I like playing at is the top. I like to find consistency and I don’t like to let people down, so before that starts happening more regularly I think it’s time to call it a day.

Steven Gerrard will offer expert analysis on BT Sport’s coverage of the Premier League and the UEFA Champions League this season.