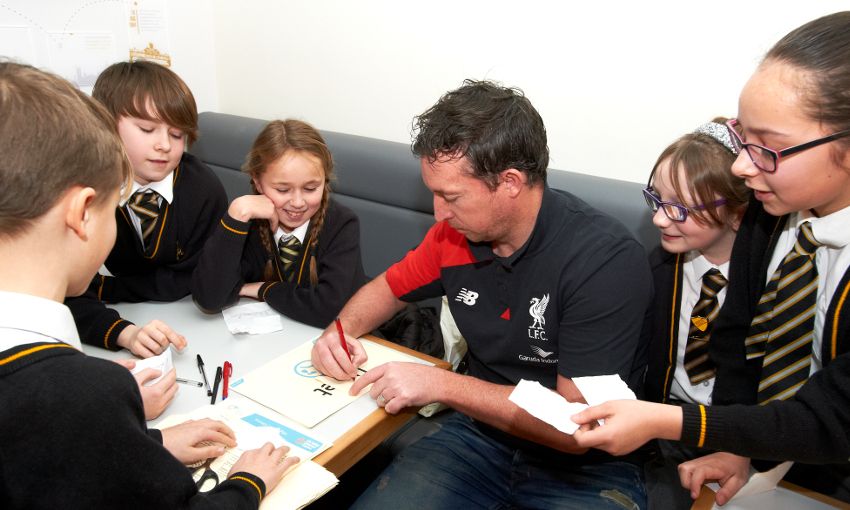 Liverpool FC Foundation, the club’s official charity, is supporting Safer Internet Day and has today hosted an online safety education event at Anfield Stadium with over 200 pupils from 20 different schools across Merseyside.

The event was designed to help local schools, parents and other organisations explore how young people can play their part to help create a kinder and more inclusive internet.

Safer Internet Day 2016 is celebrated globally on Tuesday February 9 with the aim of creating a better and safer internet for youngsters. Liverpool FC Foundation worked alongside UK Safer Internet Centre to highlight positive uses of technology and to help promote the safe, responsible and positive use of digital technology for children and young people.

The event saw a special visit from club ambassador Robbie Fowler and official LFC mascot Mighty Red in addition to special messages from Reds duo Emre Can and José Enrique.

Robbie Fowler, club ambassador, said: “It is important that young people stay safe online. It is fantastic that the LFC Foundation is supporting Safer Internet Day to help raise awareness about the issue of online safety.”

Andrea Cooper, head of Liverpool FC Foundation, added: “We are proud to be supporting Safer Internet Day. We often hear about the negative impact that the internet and new technology has on young people, but on Safer Internet Day we want to celebrate the positives and explore what we can all do to make sure that all young people have a safe and positive time online.”

Will Gardner, director of the UK Safer Internet Centre, said: “Safer Internet Day is a time to celebrate the great work that everyone across the UK is doing to encourage young people to use the internet safely and positively.

"For Safer Internet Day 2016 we want to inspire a kind, respectful and inclusive internet by empowering young people – and all internet users – to play their part to create a better internet. It is fantastic to see Liverpool Football Club getting involved in the campaign, alongside hundreds of organisations who have pledged their support for the day, including schools, charities, public and private sector and a host of celebrities and vloggers.

"It is this collaboration that makes Safer Internet Day such a far-reaching campaign, and helps us to have such a positive impact for children and families across the UK.”