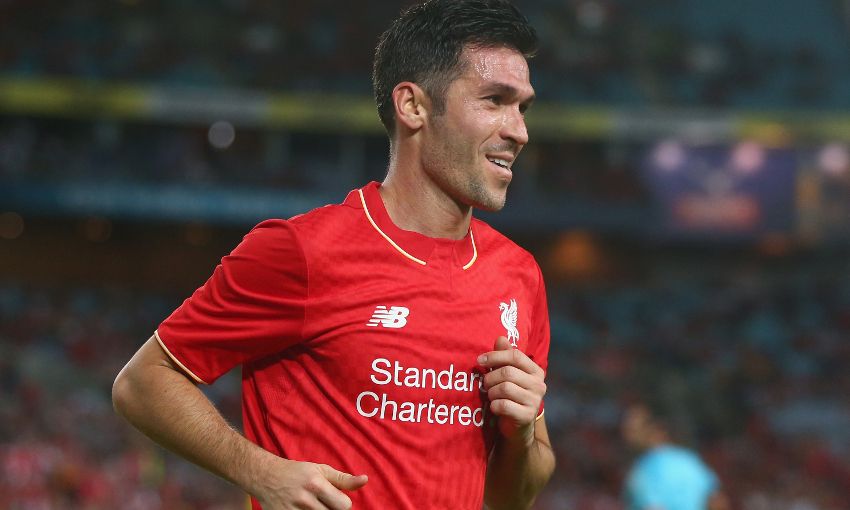 The Reds had the upper hand for much of the game and the classy forward – a firm fan favourite – found the target in either half with a well-placed finish from an angle and a clinical header.

Gerrard created the second goal and played a part in the third too, which was converted by Ian Rush from close range after John Arne Riise sent in an accurate cross for the Welshman.

Riise was also the architect for a fourth in stoppage time, John Aldridge repeating Rush's trick to seal an enjoyable encounter in front of more than 40,000 fans.

Gerard Houllier was able to select a starting XI packed with experience and quality at the ANZ Stadium, including Jamie Carragher in central defence and Gerrard as the heart of the side on his debut for the Legends.

With Gerrard acting as the team’s playmaker in the middle of the park, effortlessly spraying passes to either flank, it was a dominant start by the Reds and they should have taken the lead within six minutes.

Patrik Berger picked out Robbie Fowler at the edge of the area and the No.9’s strike across goal was parried out by Zeljko Kalac into the path of Vladimir Smicer, but the Czech attacker could not take advantage yards out.

Smicer was in the right place for Liverpool’s next opportunity too, running into space inside the box to reach a lofted through ball from Gerrard, only to slice the finish harmlessly off target.

The hosts took confidence from not falling behind and instead went close to going in front in the 16th minute as Steve Corica beat the offside trap to break free and forced a crucial stop from Sander Westerveld.

Corica was then frustrated to see a carbon copy scenario conclude with Jason McAteer clearing his effort off the line, before the Reds right-back curled in a superb cross at the other end that Garcia glanced narrowly wide.

The Spaniard did put his name on the scoresheet after 27 minutes, though. Berger provided a perfect pass inside the left flank and Garcia sped onto the ball, coolly stepped past Hayden Foxe and drove a shot inside the near post for 1-0.

Gerrard is probably still wondering how he didn’t double the lead five minutes before the interval having burst straight past the final defender and side-footed within reach of Kalac and the goalkeeper then thwarted Fabio Aurelio with his legs.

But a second goal did arrive for Houllier’s charges seven minutes after the restart, the captain chipping an inch-perfect delivery across the area from the right corner for Garcia to net with a downward header.

The manager remained true to his word pre-match in giving every player in his squad a run-out, meaning the passionate local crowd saw cameos from Aldridge, Bruce Grobbelaar and Rush.

Aurelio – playing on an unnatural side for his left foot – might have extended the lead further when Gerrard set the Brazilian up for a low curler from the right hand side which was palmed away by the ‘keeper.

Liverpool refused to give up the search for goals, however, and the team was delighted to see Rush tap in a poacher’s finish in the 74th minute courtesy of a Riise cross that cut out the Australian Legends backline.

Gerrard wasn’t too far away with an audacious blast from near the halfway line in the final moments and though the captain was denied a goal upon his return, Aldridge did strike late on to ensure the Reds can head home satisfied with their efforts Down Under.