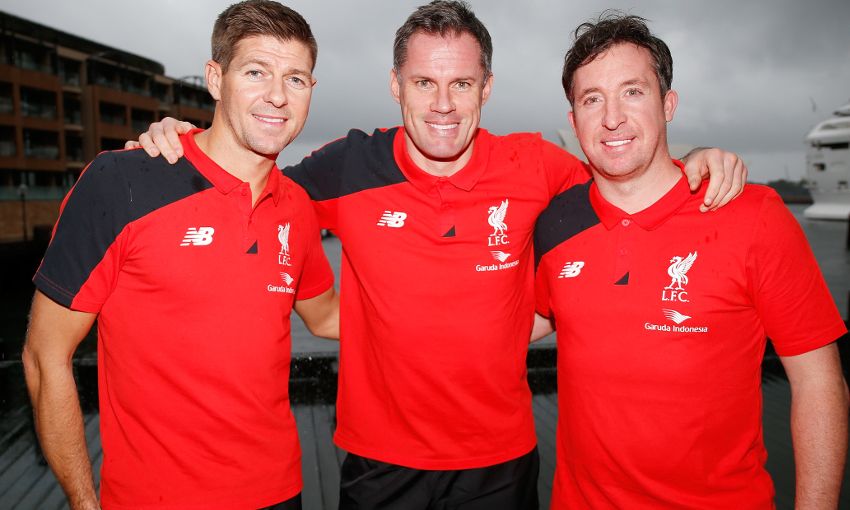 Gerard Houllier, Jamie Carragher and Robbie Fowler joined Steven Gerrard in previewing the Liverpool FC Legends' clash with the Australian Legends at a press conference in Sydney on Wednesday.

A squad full of familiar faces from Reds history is ready for the match at the ANZ Stadium on Thursday – at 8.30am GMT/7.30pm local time – that can be watched live on LFCTV and LFCTV GO.

Read on to see what Houllier, who will be in the dugout for the game, Carragher and Fowler had to say about their anticipation for representing the club once again.

You have been all around the world with football, a great experience and a great pedigree as a manager. What do you make of this Legends event?

“Two things – it will provide a lot of pleasure not only to the players but also the fans and the spectators, and also a rare opportunity to have players who played together and left their club and are now playing in the same colour as friends.”

And for yourself, how will it be to be amongst some of the boys that gave you such great success over the years?

“I was very privileged and lucky to have them and be able to coach them on a daily basis. They were very successful and they made the success of the club. Emotionally, it was something special to be in front of them a few moments ago.”

You have played in these games before, you played against Real Madrid. How have you found it?

“The Real Madrid one was fantastic and hopefully this one will be almost the same – because we lost that day and were cheated because we were the away team! I’ll be having a good chat with the referee tomorrow to make sure it’s all fair and square. It’s fantastic, not just the game, as Gerard said, it’s great to see the lads again. We all go our different ways and get involved in different things all around the world, especially with the game being so international at club level. It’s great to get the lads together. We’ve had a small team-talk today off Gerard – he said to enjoy ourselves but make sure we’re focused for the game.”

Looking forward to this game, how do you see this whole event?

“It has been brilliant. Carra was saying before that Liverpool is a very well-supported club all over the world. In terms of 100,000 at the MCG, it won’t be 100,000 [tomorrow] but hopefully it will be a big crowd coming and watching a fantastic game of football. We’re all looking forward to it and all of the Aussie lads are as well. Fingers crossed it is a good turnout and it’ll be a good exhibition game.”