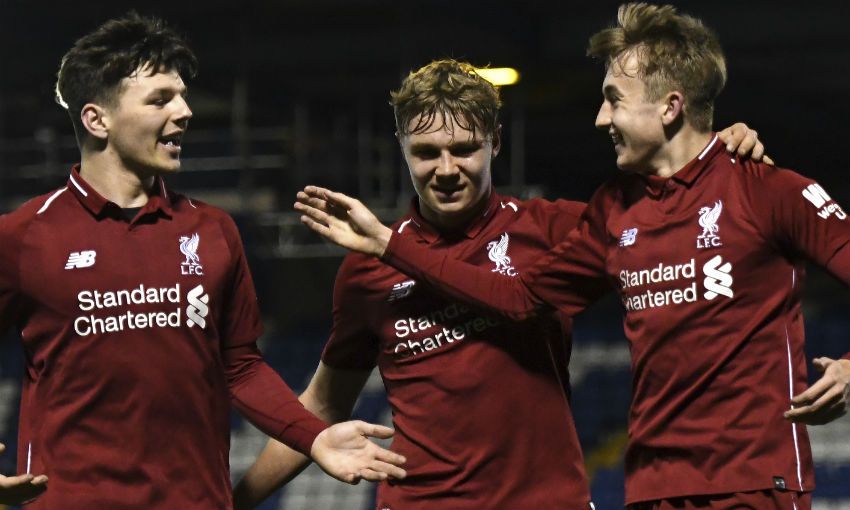 Video: All the goals from LFC's Youth Cup run so far

Liverpool advanced to the FA Youth Cup semi-finals with an emphatic 5-1 win over Bury at Gigg Lane.

A home tie with Watford awaits the young Reds in the last four after Paul Glatzel’s 25th and 26th goals of a prolific season were supplemented by strikes by Jake Cain, Rhys Williams and Bobby Duncan to see off their quarter-final hosts on Wednesday night.

Fine link-up between Duncan and captain Glatzel manufactured the opener with 16 minutes on the clock, before Cain capitalised on a defensive error to make it 2-0 in the closing moments of the first half.

Glatzel’s second of the evening - a close-range header from Leighton Clarkson’s clipped cross - arrived early in the second period as Barry Lewtas’ free-scoring side threatened to pull away, but it was Bury who scored next through Joseph Adams’ excellent first-time finish.

Any chance of a comeback from the hosts was extinguished with 17 minutes remaining, though, when Williams found space in the area following a corner and fired in.

And Duncan’s late fifth, enabled by unselfish work by his strike partner Glatzel, ensured Liverpool marched on in ruthless fashion.

With Gigg Lane’s well-worn playing surface a hindrance to fluent football, the early stages of the tie were scrappy and bitty.

A sign Liverpool were beginning to adjust to the testing conditions arrived nine minutes in, however, when Abdi Sharif dug out a cross from the right byline and Duncan attempted a spectacular bicycle kick that was blocked.

And, soon after, a glimpse of Duncan and Glatzel’s acute understanding brought about the first goal.

The former dropped deep to pick up possession, shimmied his way past two opponents and released the latter with an expertly-weighted through-ball.

Glatzel’s first touch simultaneously took his marker out of the equation and put him clean through on James Holden, and his second - an unerring low drive that passed through the Bury goalkeeper’s legs - put his team ahead. 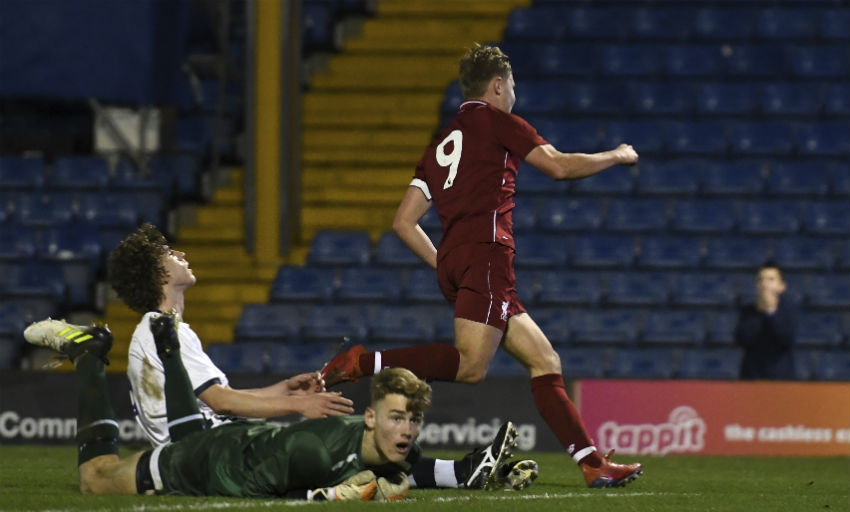 Holden was equal to Duncan’s snap-shot as the young Reds went in search of a quick second, but Sam Allardyce’s under-hit returned pass left his 'keeper stranded on the stroke of half-time.

Cain was the beneficiary of the defender’s mistake, the No.8 seizing the loose ball and slotting in to double Liverpool’s lead in the last meaningful action of the first period.

The visitors’ ever-growing dominance was further reflected on the scoreboard when Glatzel nodded in his sixth Youth Cup goal of the campaign in the opening minutes of the second half.

Bury were then given a glimmer of hope when their skipper Adams beat Vitezslav Jaros with a powerful, rising effort in the 66th minute, although Liverpool quickly re-established control and only an impressive save by Holden prevented Cain from doubling his tally.

But, from the resulting corner, Holden couldn’t prevent Williams’ deflected shot from finding the net.

Callum Hulme rattled Jaros’ crossbar with a superb free-kick as the home team sought an unlikely route back into the game, but Duncan would have the final say four minutes from time.

Glatzel eschewed the opportunity to complete his hat-trick as he bore down on Holden, instead selflessly squaring for the No.10 to roll his 25th goal of 2018-19 into an empty net and seal a last-four meeting with Watford.