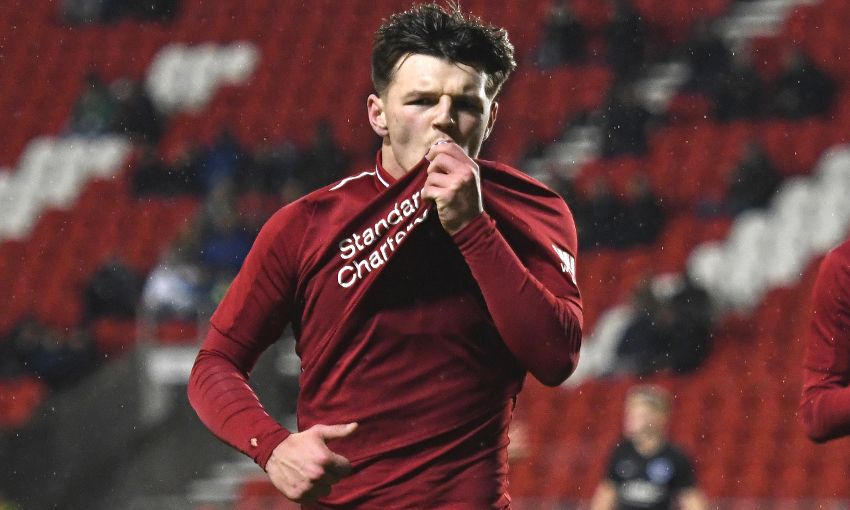 Bobby Duncan tipped Liverpool to launch a strong challenge for FA Youth Cup glory after sending his team into the fourth round with a last-minute winner.

The 17-year-old had scored one and created another to help the Reds take a 2-0 half-time lead over Portsmouth on Tuesday night.

But a fightback by the visitors saw the tie level heading into stoppage-time – when Duncan pounced on a cross from strike partner Paul Glatzel to net a dramatic decider.

Barry Lewtas’ side will face Accrington Stanley in the fourth round.

“It was unbelievable,” Duncan, who now has 19 goals this season, told Liverpoolfc.com.

“Paul had a great turn in the box and picked me out – I stuck my right foot on it and it went in. It was a hard finish but I got it in the back of the net.

“We’ve got character and desire. The games where we’ve scored last-minute winners [show] we’ve got great desire. I think we’re fitter and stronger than other teams.

“I think we can go all the way, to be honest. We’ve got a great team and we’ve got great players who can come off the bench and change the game for us.”

Duncan and Glatzel have formed an exciting partnership since the former joined the club in the summer and impressed once more against Portsmouth.

“We have been playing with each other since we were kids, at England,” said Duncan.

“We’ve always had that combination and instinct for each other, whether to slide [each other] in or link up. We’ve got a great partnership.

“It doesn’t matter about the goals, it’s about team performances and getting the win – that’s the most important thing.”