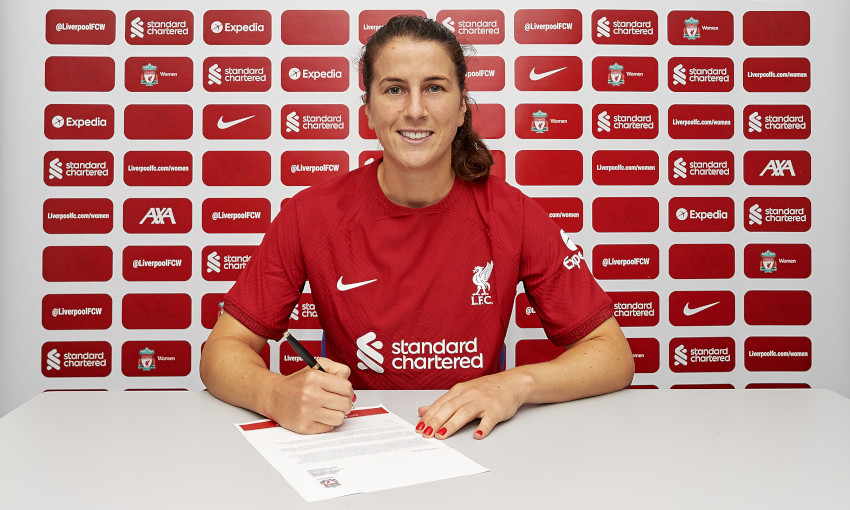 The Republic of Ireland international led the team to the FA Women’s Championship title last season and will be at the forefront of the challenge as they return to the Barclays Women’s Super League in September.

A lifelong Reds fan, the 34-year-old finally joined the club four years ago after a trophy-laden career at Arsenal and Chelsea.

Vastly experienced at centre-back, her positional excellence and aerial dominance offer a perfect foundation for the Liverpool defence.

Galway native Fahey has played for her country more than 100 times and continues to fight for World Cup qualification in the current campaign.

LFC Women manager Matt Beard said: “Niamh was outstanding last year, a great leader on and off the pitch.

“Her performances last season, even in the big games, were fantastic. Her experience will be something we will need next season.

For Fahey, the chance to continue her career with the Reds was a ‘no-brainer’.

She said: “It’s brilliant, I’m so excited for the year ahead and I’m delighted to extend my stay.

“Getting to lift the trophy last season with this group of girls and staff, there’s nowhere else I’d rather be. It wasn’t even a decision.

“It’s something that has sunk in over the summer and obviously makes me very proud.”

Fahey is not one to rest on her laurels, though, and is determined to continue driving forward both individually and collectively.

“I still want to go out and be the best I can be in training and drive high standards, I don’t think that will ever leave me.

“It’s great that we’ve got back up to the WSL but that’s not enough for Liverpool Football Club, we should be challenging for titles so that’s the long-term plan and it’s something which is very achievable.”

And the LFC Women skipper paid tribute to the supporters who were such a huge part of the team’s success last season.

The No.5 added: “Our supporters have been unbelievable, following us the length and breadth of the country. I’m sure they’re just as excited as us to be playing in the WSL again, back playing against the big clubs, and having those exciting fixtures to look forward to.

“I know they’ll have our back again this season, as they always have.”

Fahey and LFC Women return to Prenton Park on Sunday to take on Blackburn Rovers in a pre-season friendly at 2pm BST. Tickets are on sale now at liverpoolfc.com/women-tickets.