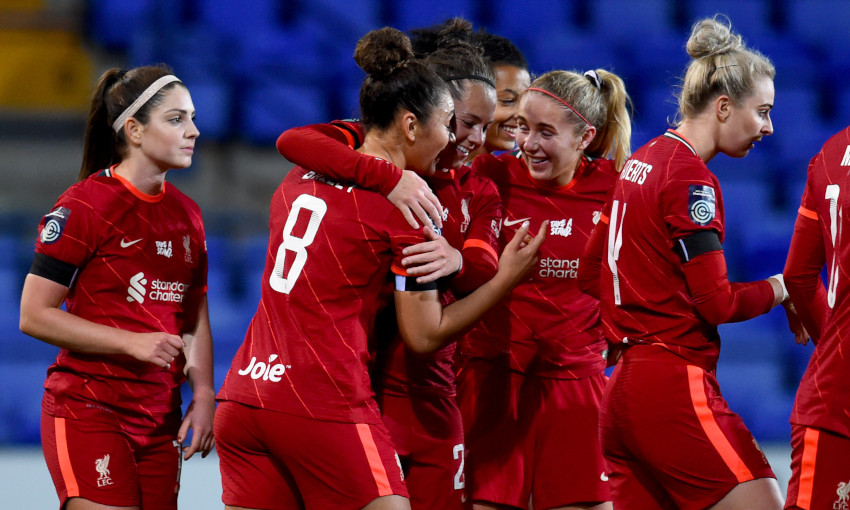 Liverpool FC Women moved to the top of their Continental League Cup group with a 2-1 win against Blackburn Rovers Ladies on Wednesday night.

The Reds stretched their unbeaten run in all competitions to 11 games as goals in either half from Jade Bailey and Taylor Hinds – both via Missy Bo Kearns set-pieces – secured all three points for Matt Beard’s side despite a late response by Aimee Hodgson.

The victory increased LFC Women’s points tally in Group A to seven, with one fixture remaining – away at Sunderland next month.

With this the Reds’ second of three matches within a week, Beard shuffled his options and only Yana Daniels and Rhiannon Roberts retained their place in the XI from Sunday’s 2-0 win at Durham. Kearns took the captain’s armband.

Before the kick-off at Prenton Park, both sides paused to mark the passing of Louis Bimpson – who played for the men’s teams of both Liverpool and Blackburn – with a period of applause. Black armbands were also worn by the players. 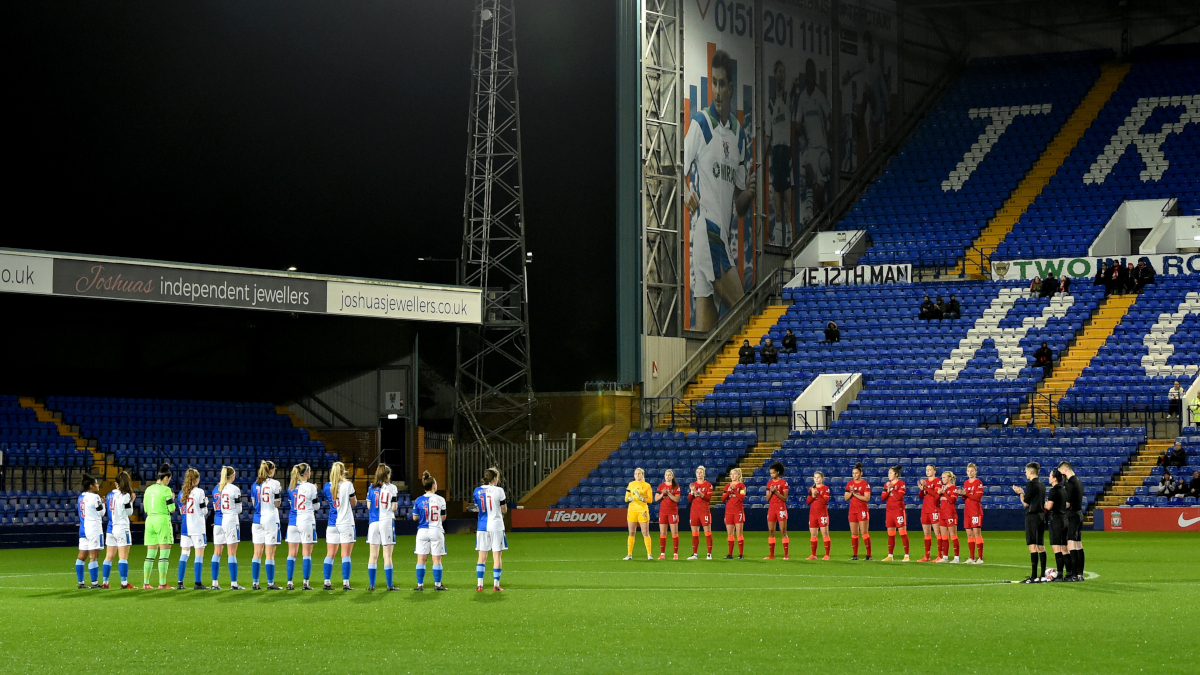 The Reds made a fast start in front of a vocal crowd that included Trent Alexander-Arnold, and could have taken the lead inside six minutes.

Daniels made ground along the left flank and guided an accurate pass into the area and forward run of Ashley Hodson. The No.14 took a touch and opened up her body for a side-footed finish that she miscued wide of the right post.

Soon they opened up their opponents from the other wing, Georgia Walters breaking into space and clipping an enticing cross to the back post, where Daniels – perhaps expecting a defender to clear – could only gently touch the ball towards goal with her midriff, allowing Alexandra Brooks to scoop up.

Blackburn could have grabbed a breakthrough themselves, though, with an unmarked Megan Hornby just unable to reach Ellie Leek’s low cross from the right edge of the box.

But Liverpool swiftly resumed dominance of the ball and moved in front from a 28th-minute set-piece. 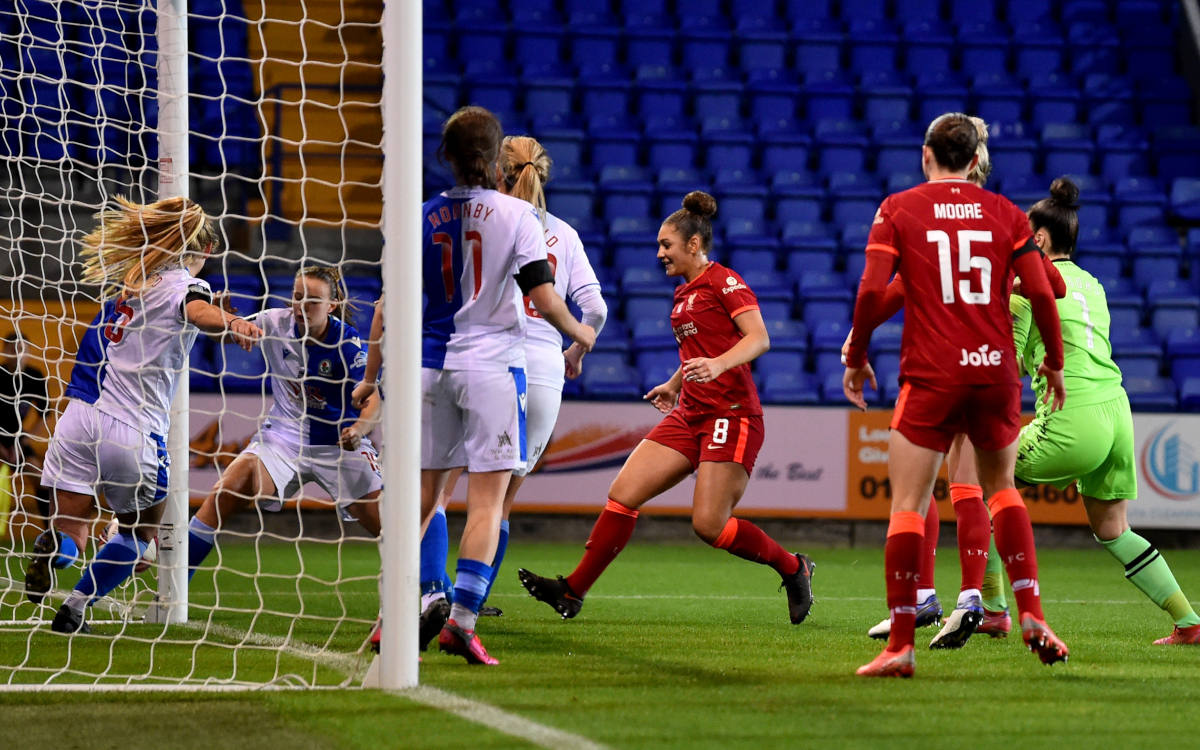 Kearns curled in a dangerous corner from the left-hand side that Brooks could not get sufficient gloves on and Bailey capitalised by nudging the loose ball over the goalline from yards out.

There was a strong chance to make it 2-0 shortly before the interval as Hodson’s left-footer was pushed away by Blackburn goalkeeper Brooks and Daniels followed in. The Reds No.20 went down under a challenge from Leek but penalty appeals were waved away.

Beard made a double change for the second half, sending on Hinds and Leighanne Robe for Daniels and Roberts. And the switch paid almost-instant dividends.

Hodson engineered a shooting opportunity for herself with a smart spin in the right channel and her angled blast was tipped over the goalframe as the clock ticked into the 51st minute.

From the resulting corner, Kearns swept in another enticing left-wing delivery and this one was met by an excellent Hinds header, powered into the net at the near post.

The visitors continued to probe for a lifeline and Liverpool needed one impeccably timed sliding tackle by Robe to thwart a clear-cut scoring chance.

The Reds still looked the likelier to add to the scoresheet, however, and Hodson was disappointed not to as she scuffed Kearns’ bobbling cross wide of the left post in the closing stages.

Rachel Furness then sent a downward header up and over the crossbar from yet another pinpoint Kearns corner, before Melissa Lawley flashed a finish too high at close range.

Blackburn threatened to punish Beard’s charges with five minutes to go; Katie Startup’s attempted clearance as she came out of goal was curled straight back into the exposed net by Hodgson.

Liverpool successfully saw out the final moments of the tie, though, to clinch a worthy victory and continue their brilliant form.