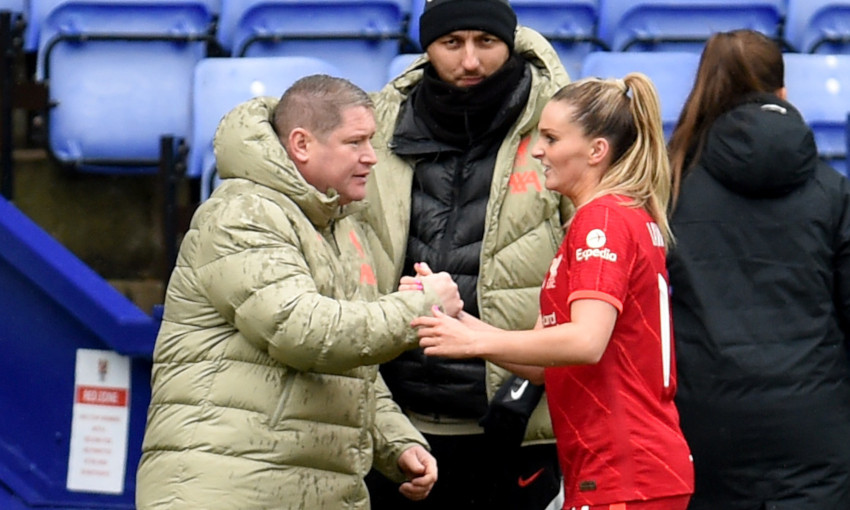 Matt Beard declared himself satisfied after seeing Liverpool FC Women continue their challenge for top spot in the FA Women’s Championship with a 2-0 win over Lewes FC on Sunday.

Forward Leanne Kiernan scored twice in the first half at Prenton Park to take her tally to six goals for the season.

The Reds remain in second spot in the division – just two points off leaders Durham, who recorded a 1-0 home victory over London City Lionesses.

The result also saw Beard's side stretch their unbeaten run to seven games in all competitions.

Speaking to Liverpoolfc.com post-match, Beard said: “It was another good win for us, a clean sheet as well and we could have won it by a lot more.

“But you could see at the end we were starting to tire as we’ve had 12 players away on international duty and apart from two of them, the others played two lots of 90 minutes.

“So, the most important thing was the three points and keeping up the pressure on Durham.”

Kiernan caught their eye again with a double strike, with her second a stunning strike into the top corner.

“Leanne has a great personality,” Beard continued. “She works so hard for the team and has been working so hard on her finishing in training, and she’s getting the rewards for it.

“You look at her second goal and it was a calm and clever finish – I’ve actually seen her do that before for me. But I’m just glad she’s getting goals and she fully deserved them today.”

Well worthy of wearing the no.9 shirt ⚽⚽ And well worthy of being the @carlsberg Player of the Match, Leanne! 🏆 https://t.co/BblIJYGER1

Beard’s only criticism for his team was not being clinical enough as several golden opportunities to increase the scoreline were spurned.

He added: “When you are dominant like that and create that many chances, you need to take them.

“Missy Bo [Kearns] had a one-v-one situation and missed another good chance. Ceri Holland was clean through as well and their goalkeeper made an unbelievable save to deny Leanne a hat-trick.

“Lewes are a good side and 2-0 is always a vulnerable scoreline but we got the three points, which is the main thing.”

Goalkeeper Rachael Laws also ensured a clean sheet was kept with a couple of outstanding saves in the opening 45 minutes to deny Lewes.

“I said to Lawsy after the game that she was world-class,” Beard revealed. “Her distribution was absolutely fantastic and, to be fair, it was touch and go whether she was going to play today.

“She trained for the first time on Saturday after hurting her hand on the Tuesday, but what a performance.”

Liverpool’s attention now turns towards Wednesday night's trip to Sheffield United in the group stages of the Continental League Cup.

The encounter is being played at Chesterfield’s Technique Stadium, with kick-off set for 7.30pm GMT.

"We will rotate the players for this game," said Beard. "We have got a lot of games coming up in the next few weeks and we have to protect the players.

"We will need all of our squad, so we look forward to Wednesday and hopefully we can give a good account of ourselves."