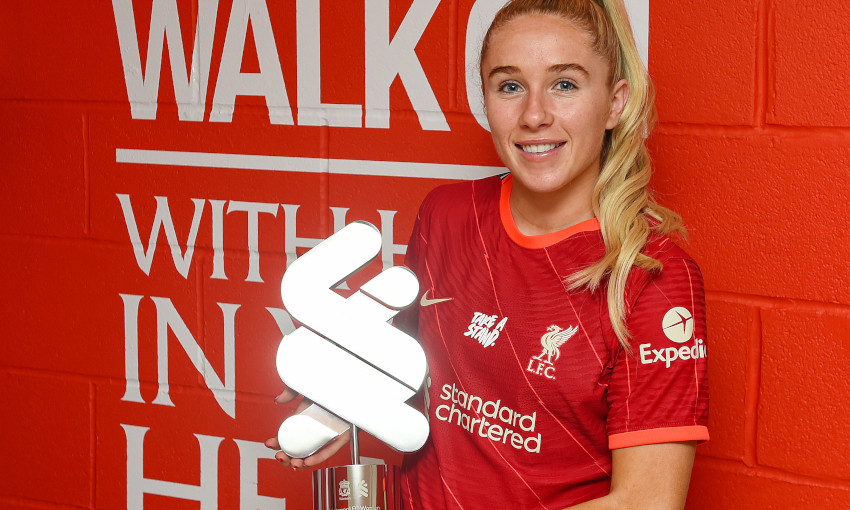 The 20-year-old midfielder was an integral part of Matt Beard’s side in a run which included victories over Watford and Crystal Palace, as well as a draw with Bristol City.

The trip to Vicarage Road also brought Kearns’ first goal of the season, a spectacular effort direct from a corner kick.

The Academy graduate from Allerton topped the fan vote a number of times last term, too, and is determined to keep on improving.

Thanking those who voted for her, Kearns told Liverpoolfc.com: “I’m really pleased because when I won my first monthly award last season I said I wanted to keep winning more because it would be a sign that I was performing consistently and doing the right things. So it shows I’m doing that.

“It’s also nice because so many of the girls are playing well at the minute. Different people are starting in games and training is so competitive, which people don’t see.”

The Reds are now taking a short break until returning to Prenton Park to face Lewes on October 31, but Kearns will be on international duty after her call-up this week – alongside teammate Taylor Hinds – to play with England U23s.

“It’s the first time I’ve been away with England since the U19s before the COVID lockdown so I’m really looking forward to it,” she said.

“It’s the first time I’ve worked with Mo Marley as a coach and she’s got Fara Williams as one of her assistants so I’m sure I’m going to learn a lot.”

The team will gather at St. George’s Park on Monday for a camp before travelling to Belgium for a match the following week.