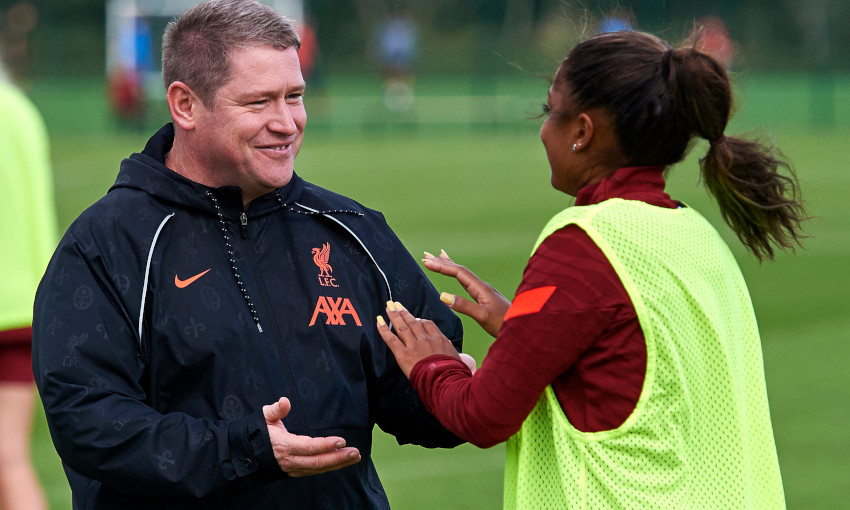 We were very happy on our journey back to Merseyside on Saturday after an excellent performance from the girls at Sheffield United.

I thought we started so brightly and we could have been 1-0 up from the header when Jas [Jasmine Matthews] had a great chance. But we kept at it and Charlotte Wardlaw scored a superb goal – her first for the club, what a strike it was!

The goal came after 17 passes and that was so pleasing because that’s one of the things we’ve been talking about – when to play forward and when to recycle. We went left to right and played around them and got our rewards.

Once we went 2-0 up, I thought Sheffield United began to cause us a few problems and they changed their system, so it became a bit difficult. But the thing that pleased me about the whole performance was we always looked in control with or without the ball. We created a lot of good chances and I thought 2-0 was a good scoreline for Sheffield United because it definitely could have been a lot more than that.

I said to the girls after the game – because obviously there’s girls who haven’t had as much game time as others – but everyone’s attitude, application, training throughout the week has been for most parts absolutely brilliant. Everyone deserves credit because they are all working hard in training and it’s not just about the XI that I put out on the pitch or players that come off the bench.

​Everyone is playing a part. I think that it’s important that we recognise everyone’s efforts whether they are playing or not playing. Every week we are performing that bit better and I’m excited to see come Christmas how much further we can come as a team.

It was great to see Leanne Kiernan score again and she could have had another one as well, bless her. Playing her down the middle gives us something slightly different. She had a great start to her career in Ireland playing down the middle and scoring goals. Leanne can score different types of goals. I knew once she got her first one for us that it would take the pressure off and the weight off her shoulders.

Knowing Leanne as I do as a person, she always plays with that smile on her face. It’s not just about her scoring goals, it’s her work ethic and what she gives this team. She is just a delight to work with and not only is she a great player but she is a great team player.

Before the next international break we are back at Prenton Park on Wednesday night when we welcome Aston Villa in the group stages of the Continental Tyres Cup.

We’ve had a lot of games in quick succession, we’ve got a big squad here and one that has really stepped up to the plate in the last two weeks, with players coming off the bench to make an impact.

For us, we’ve got such a good squad and good depth. This gives me an opportunity to look at some of the younger players and give players like Razza [Rhiannon Roberts] a chance to impress and stake a claim. From my perspective, this competition gives me a great opportunity to do that.

This will be a good test for us. Aston Villa have a new manager in Carla Ward. It’s a pretty similar story to us because they made a lot of changes in the summer – Carla came in with new staff and new players.

They had a good start to the campaign and I know they lost at Reading at the weekend but this will be a tough game and they will be desperate to put that right on Wednesday night.

For us, we will just concentrate on ourselves, which is what we have been doing. We have found a system that suits the players that we’ve got and the players are enjoying it. We are playing against a WSL team in Aston Villa and the players that come in for us on Wednesday night, it gives them a platform and an opportunity to showcase what they can do as well.

Rachel Furness was back in the starting XI on Saturday and produced a brilliant assist for Leanne’s goal. Furney has returned from an injury this season and she has also played a lot of international games with Northern Ireland.

She came off the bench against Coventry United and changed the game for us. It’s important to look after the players and manage their fitness. It’s the same with Niamh Fahey and she will go away with Ireland after Wednesday.

We won’t have the opportunity to play any friendlies during the international break because the majority of our players will be away, so Wednesday night will be a good game for us and give players opportunities. Georgia Walters has impressed during the last few weeks and I want to give her an opportunity to stake a claim.

I’m looking forward to seeing what these players can produce and do, and if we need to change things then we will have a very strong bench.

I want to win the game. It’s important to try to keep up our winning momentum, but the FA Women’s Championship is our priority and this is a great opportunity for me to rotate and keep everyone competitively fit.

Thanks for your support as always.