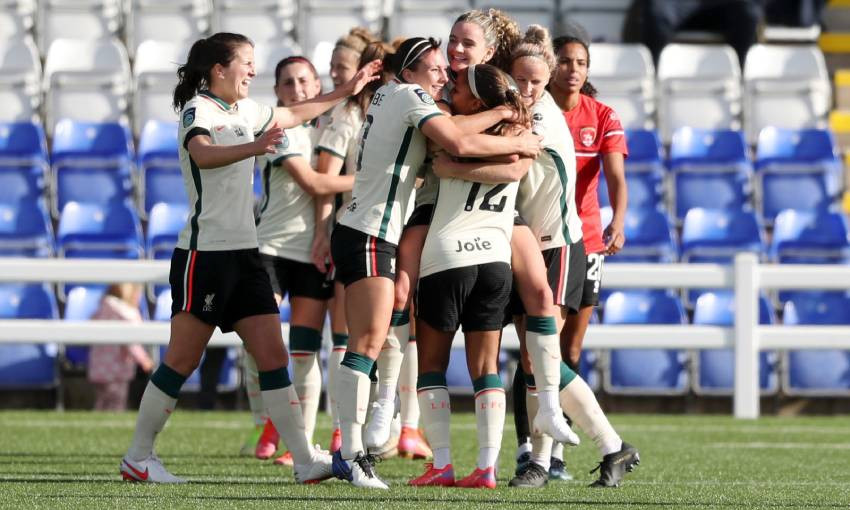 Photo gallery: LFC Women in training for trip to Coventry

Leanne Kiernan scored a quickfire double to give Liverpool FC Women a 2-0 victory away at Coventry United on Sunday afternoon.

The striker opened the scoring in the FA Women's Championship contest after 69 minutes before netting the second goal four minutes later.

Coventry played over an hour of the game with 10 players after defender Grace Riglar was given a straight red card, with Matt Beard's Reds going on to make it three wins from their last four fixtures.

Kicking with the wind on a blustery day, the visitors were well on top all throughout the opening 45 minutes.

Early chances fell to Ceri Holland and Kiernan, who both fired wide with efforts from inside the penalty area.

The Reds' cause was boosted when Coventry were reduced to 10 players just after the half-hour mark.

Kiernan chased a ball in behind the hosts' backline and was brought down by Riglar. With few, if any, covering defenders around, the referee deemed it to be denying a clear goalscoring opportunity and produced the red card.

Following the half-time break, Liverpool continued to bring the pressure and went close through Jasmine Matthews' close-range effort, which was grasped by the goalkeeper.

Olivia Clark in the Coventry goal pulled off another good save to deny Charlotte Wardlaw from inside the 18-yard box.

But Liverpool finally found a way through their opponent's rearguard, with Kiernan and half-time substitute Rachel Furness combining.

From the left channel, Furness sent in a cross that was met with a diving header from Kiernan to glance the ball into the far corner.

Doubling the lead and wrapping up the three points, Kiernan rounded Clark and slotted home, having been played in thanks to a fine pass from deep by Leighanne Robe.