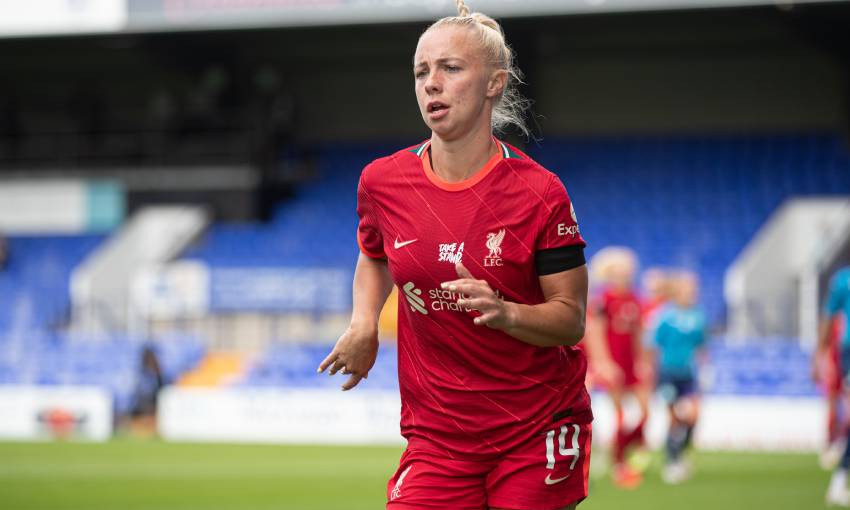 Ashley Hodson is on the cusp of making history for Liverpool FC Women this weekend.

The forward, who made her first-team debut in 2014, could break the Reds' all-time appearance record in the professional era on Sunday if she features against Bristol City in the FA Women's Championship.

After equalling Gemma Bonner's total of 115 outings in last week's victory over Watford, the Development Squad graduate spoke of her pride at such a long, fruitful relationship with the club.

Congratulations @AshleyHodsonX .. what a journey it has been for you so far, plenty more to come ❤️ https://t.co/RAADrElEca

She told Liverpoolfc.com: "Obviously when you're younger, you never know what's going to happen and obviously there's been things along the way. But now I do see it as my team.

"I've obviously been there for so long and [I'm] hoping to continue the journey. Firstly, it's an honour. And secondly, I do think it's a good achievement.

"I'm obviously proud of myself because I've had a couple of long injuries along the way, which have set me back, [put] me out for quite a while.

"So to overcome them and still be there and still be pushing every day on the pitch, obviously I'm really grateful."

Hodson was a Women's Super League winner with Liverpool in 2014 during Matt Beard's first stint as manager.

With Beard back at the helm, the club's current longest-serving player is determined to create plenty more happy memories.

LFC Women: Tattoos, comebacks and working in a fish factory

"I'm hoping for it to be a successful season, just like all the other girls are as well and all the staff. I really think with this group that we've got, we're really together and I think we can do that.

"I think on the pitch I've really matured. Obviously I was with Beardy at the start and he really helped me at the beginning and then I've had a couple of managers since, but now he's back and I still think he's continuing to do that.

"As a person, I've grown up a lot off the pitch. Maybe I was quite immature when I first came through – I was obviously young. But now I'm really focused and want to help the team get to where we want to be."