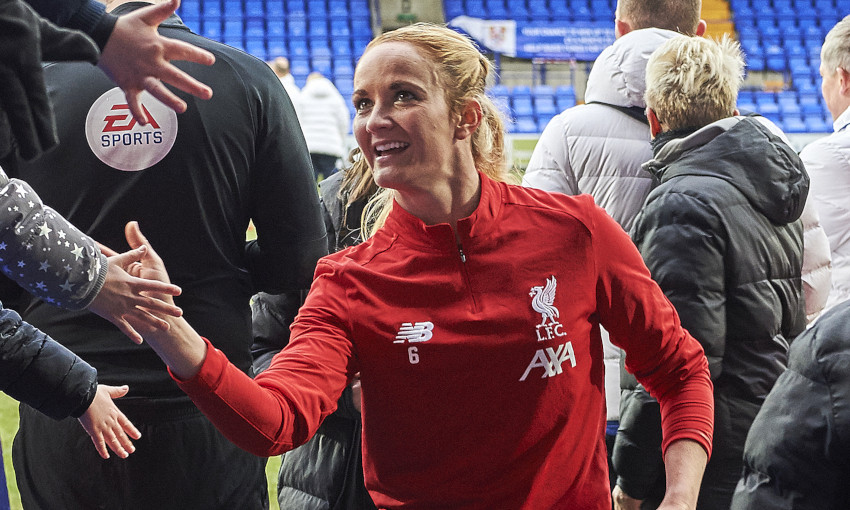 Former Liverpool FC Women captain Sophie Bradley-Auckland has sent her thanks to fans for all their support during her time with the club.

The centre-back became a firm favourite during two seasons with the Reds before leaving last year to concentrate on her work in her family-run care home in Nottingham.

Bradley-Auckland was on the front line during the onset of the COVID-19 pandemic and could not risk the health of her residents by continuing to train and play football.

A new addition to the family with the arrival of son Harley in March this year further increased the off-pitch responsibilities for Bradley-Auckland, whose daughter Macie has just turned four.

But the 31-year-old is not finished with football yet and will soon announce her latest challenge in the game.

“With the pandemic and everything, I didn’t really have the opportunity to say goodbye to the Liverpool fans and I just wanted to thank them for all their support during my time at the club,” she told Liverpoolfc.com.

“I’ve got nothing but good things to say. Liverpool was the club that owed me nothing and gave me everything. I’ve got everything to thank them for.

“I just loved it and I think that showed in how I played on the pitch.”

A return to the Reds was always impossible given her new family commitments and the journey times between home in Nottingham and Merseyside.

“It just couldn’t work,” continued Bradley-Auckland. “My normal journey was two-and-a-half hours each way on a good day and three to three-and-a-half on a bad day. With two children and another job, it’s just too far.

“But I did want to come back to football, I wasn’t ready to finish with it yet. It will be demanding for all the family but I’m going to give it a go.”

Bradley-Auckland’s new club will benefit from a work ethic which saw her back at work three days after giving birth to Harley.

He’s already a firm favourite with residents at the care home, who regard mum and her children as part of their own extended family.

“It’s very much one big family,” said Bradley-Auckland, who has just one wish if she ever returns to play in a game against the Reds.

“Hopefully the fans will give me a warm welcome if I come back – that would be nice!”