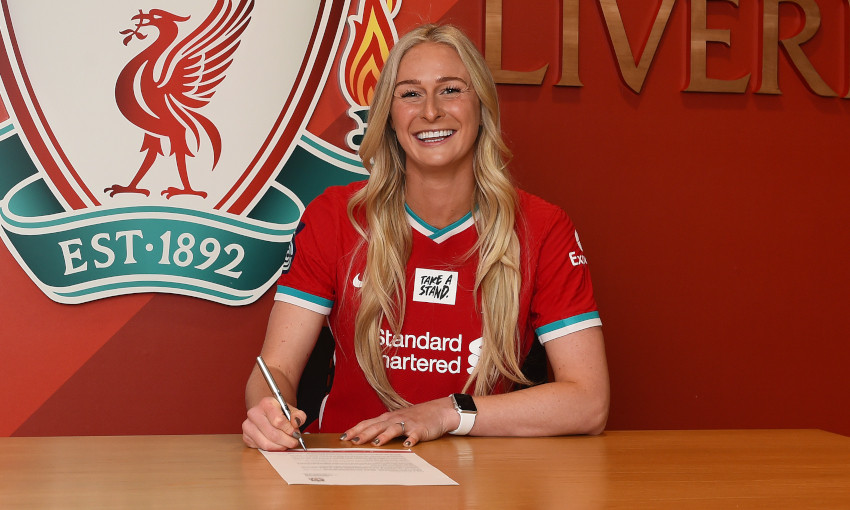 The Wales international has been a model of consistency in the 2020-21 season as the Reds adjusted to life in the FA Women’s Championship.

A fierce competitor with enormous drive and will to win, this campaign saw her versatility come to the fore as she switched from midfield to play the majority of the year in her international position of right full-back.

Roberts is in her third year with the Reds after joining from a Doncaster Rovers side which had just won the WSL 2 back in July 2018.

Her next appearance will be her 50th in a Liverpool shirt, with her only goal coming against another of her former teams, Blackburn Rovers, in 2020.

Video: Rhiannon Roberts signs a new deal with the Reds

The player – known to everyone simply as ‘Razza’ – told Liverpoolfc.com: “I’m really, really happy to be committing my future to Liverpool Women.

“I’m really looking forward to the future. We’ve built some great foundations this year and I’m ready to go for next year now. I’m putting all my energies into that and we’re ready to try to get ourselves back up where we belong.”

The 30-year-old also reflected on a season where the Reds finished third in a championship race, played without fans in attendance.

“It’s been highs and lows this year really,” she said. “It’s been a difficult year for everybody. We’ve been really lucky to be able to continue doing what we love every day and continue playing in our league.

“It’s been a season of two halves really but we’ve got some really good results in the second half of the season and our performances have been good.

“It’s been gutting to play without fans. I’m their number one fan! I love the buzz of going out when the fans are there cheering, clapping and singing their songs. The one time we had them this season was a big scoreline that day and I think it really boosted the girls.

LFC Women interim manager Amber Whiteley said Roberts would continue to be a crucial member of the squad going forward.

Whiteley commented: “Razza has been an integral part of the team, particularly over the last season, and we’re delighted she has committed her future to us.

“She is the ultimate professional both on and off the pitch, and everything she does is for the greater good of the team.

“It’s been a pleasure to work with Raz these last 12 months – every day she comes into the training ground and wants to be better. I’m looking forward to continuing that journey next season and beyond.

“No doubt Razza will be key to our future success.”