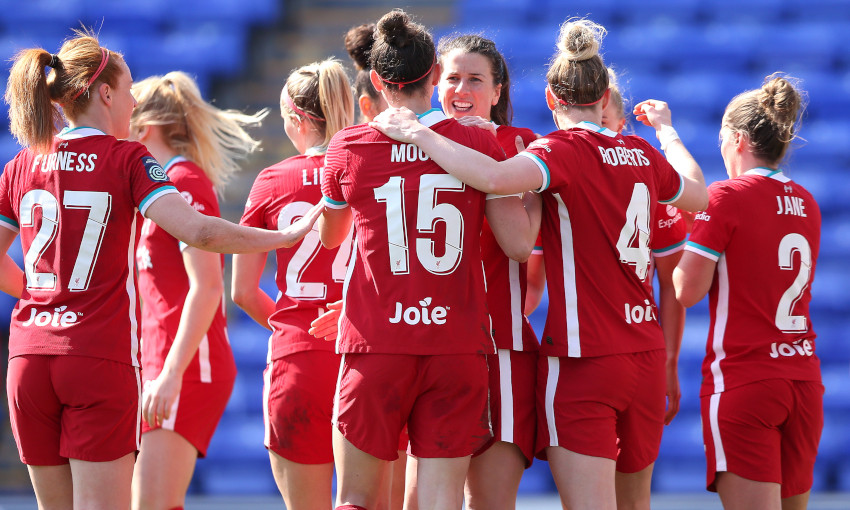 Liverpool FC Women extended their unbeaten run to six games as a goal in each half earned a 2-0 win over Lewes FC Women in the FA Women's Championship on Sunday.

An early own goal and a header from Meikayla Moore after the interval made the difference for the Reds at a sun-drenched Prenton Park.

Interim manager Amber Whiteley’s side started the contest with real purpose and could have had a couple of goals within five minutes.

First, a fine team move ended with Kirsty Linnett shooting on goal but Tatiana Saunders was well behind it in the Lewes net.

Linnett next turned provider to set up Ceri Holland, who was denied by a last-gasp block, before Linnett’s own effort from close range was deflected just wide.

It wasn’t long before the Reds made the breakthrough, however, with Holland’s corner headed into her own goal by Lewes defender Nicola Cousins on seven minutes.

LFCTV GO: Watch the best of the Lewes action

The visitors quickly responded by forcing several corners, while Ini Umotong flashed a shot just wide after picking up on a loose ball in the home defence.

Linnett was impressing with her movement as she led the Reds attack and a good ball behind the defence from Rachel Furness saw the striker fire a shot at goal that was pushed round the post by Saunders.

The corner eventually fell to Rhiannon Roberts and her powerful volley was blocked near the goalline.

Another good run down the right from Linnett was followed by a delivery right across the box but it couldn’t find a red shirt, before Holland’s corner was clawed away by Saunders onto the bar.

Late pressure in the half from Lewes led to a scramble in the box, though the referee waved away claims from the away team for a penalty for handball.

The second half brought an early chance for Liverpool to extend their lead. A clever ball down the left by Ashley Hodson allowed Linnett to close in on goal from a narrow angle, but Saunders was out to smother.

Nevertheless, the second soon arrived – and it owed much to some quick thinking.

Holland played a free-kick into Hodson on the flank and she curled a cross onto the head of New Zealand international Moore, who diverted the ball home.

Melissa Lawley and Missy Bo Kearns arrived from the bench around the hour mark as Whiteley looked to press home the Reds’ advantage.

It needed good defensive work from captain Niamh Fahey and Moore to deny Umotong an opening a short time later, while Roberts made a superb clearing header when the striker sent in a dangerous cross from the right.

Jade Bailey picked up a knock to reduce the hosts to 10 players for the last six minutes but they saw the game out without goalkeeper Rylee Foster being unduly troubled.