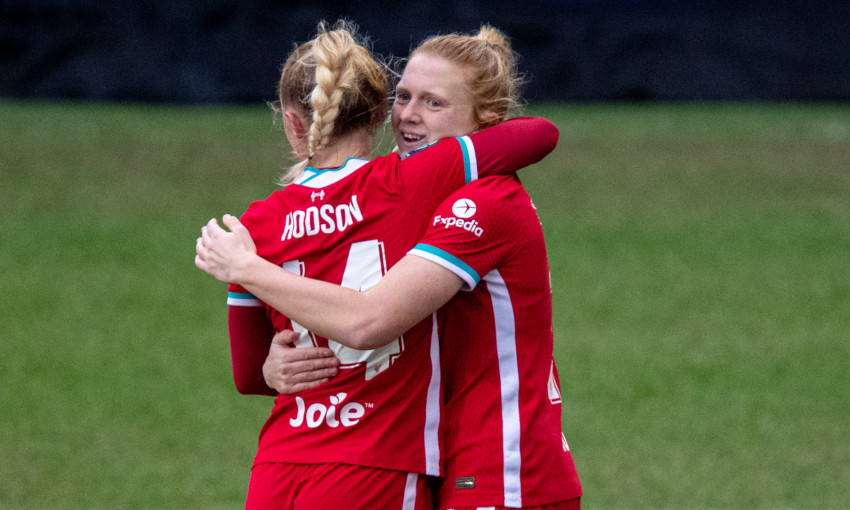 It's fair to say Ceri Holland has made an immediate impact since joining Liverpool FC Women in January.

Holland came off the bench to score on her Reds debut away at Charlton Athletic, then marked her home bow with another goal in the 3-0 win over London Bees.

She was on the scoresheet again during last Sunday's 5-0 defeat of Coventry United Ladies, taking her tally to three goals in her opening four games for the club.

Amber Whiteley, interim manager of LFC Women, has naturally been delighted by Holland's valuable contributions since arriving on Merseyside.

"She's so powerful, quick to get in behind, and she's got great running shoulder to shoulder.

"She goes for the full 90 minutes. When the opposition are fading off, Ceri is still very much at it.

"I thought she could have scored a couple more out there."

The Reds dominated the weekend clash with Coventry from start to finish.

The captain, Niamh Fahey, followed up her first goal of the season in the preceding 1-0 win away at Crystal Palace by helping herself to two more, with assists again coming from Scouse midfielder Missy Bo Kearns.

Becky Jane and Melissa Lawley provided the other strikes on the day as a third consecutive FA Women's Championship win was secured.

"It was a brilliant day," added Whiteley.

"A good team performance again, a good squad performance actually. We scored goals from all over the field and our captain Niamh got two, which was brilliant, so I'm really pleased.

"Niamh and Becky can't stop scoring for us and they are climbing up the leaderboard in terms of goals and assists!

"Becky got a goal and an assist for us. Niamh's second goal, what a finish! It was a great delivery from Bo and she finished it superbly.

"Bo was saying Niamh is like her mum, so she looked after her today because it was Mothering Sunday, so she gave her two assists!

"That equals our win record this season of three on the bounce, so we want to try to keep that going now. Can we take this run as far as we can? We certainly hope so."