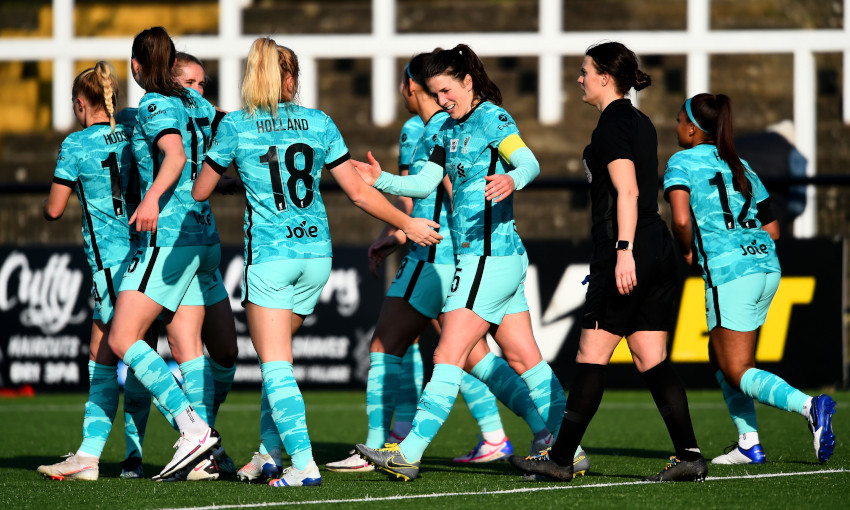 Liverpool FC Women registered back-to-back wins in the FA Women's Championship with a 1-0 result at Crystal Palace Women on Sunday.

Niamh Fahey headed in the only goal of the fixture at Bromley FC to follow up last weekend’s 3-0 victory over London Bees for the Reds.

Liverpool made the better of the early running, with Melissa Lawley working the goalkeeper after moving in off the left-hand side to send in a shot.

And the Reds went even closer at the midway point of the first half.

Amy Rodgers created the opportunity with a through ball for Ashley Hodson to bear down on the Palace net, but Chloe Morgan denied the No.14.

Kirsty Linnett volleyed wide as the visitors continued to mount pressure, while Rachael Laws stopped an Eagles free-kick as the interval arrived with the score still goalless.

There were chances at either end – for Linnett and Kate Natkiel respectively – when the action restarted, but the breakthrough would not come until the 64th minute.

Within moments of her introduction as a substitute, Missy Bo Kearns’ corner was met by Fahey, who guided her header beyond the goalkeeper for 1-0.

The Reds soon needed their ‘keeper to preserve that newly-established lead as Laws vitally pushed Kirsty Barton’s hit over the bar.

Taylor Hinds went close to finishing off the game with an attempt from long range that did not quite beat Morgan, but interim manager Amber Whiteley’s side had done enough for three points.