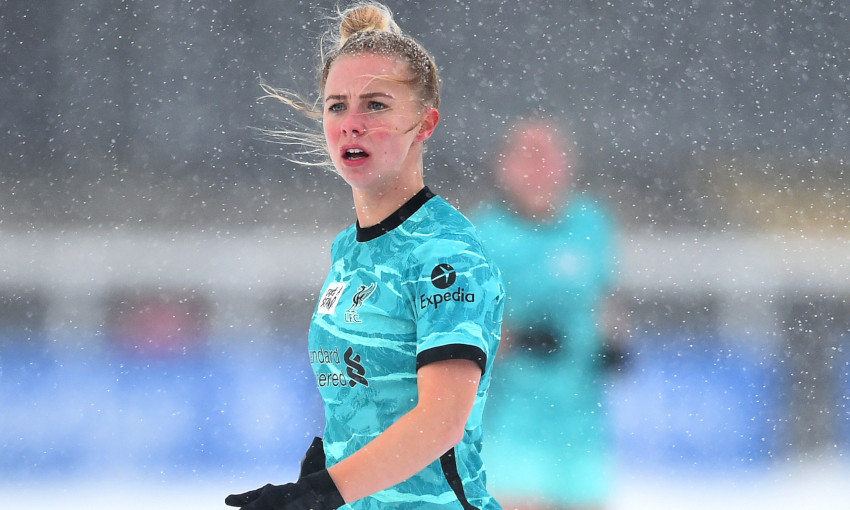 The Reds responded to a one-goal deficit in the FA Women's Championship clash with an improved second-half display that saw them establish a 2-1 lead in the wintry conditions.

Rachel Furness had brought her side level with a back-post finish, before substitute Ceri Holland marked her debut with what seemed to be a winner two minutes from time.

Charlton were awarded a last-gasp penalty, however, and converted it to grab a share of the spoils in dramatic fashion.

Hodson, who was introduced on the hour mark to play her first minutes of 2021 following a hamstring injury sustained in December, created both Liverpool strikes with crosses from the right flank.

But the final outcome meant mixed emotions for the No.14.

"We are obviously disappointed to have conceded in the 90th minute, especially after coming back from 1-0 down in the second half, and to concede the late penalty was gutting, and we are all disappointed," said Hodson.

"We didn't let our heads drop at half-time and it was just about being patient and keep it going.

"We knew chances were going to come and it was just about taking them in the end and we felt we did that, but it was just disappointing to concede again so late on.

"It was great to be back playing again and we were all delighted to see Ceri score on her debut.

"Hopefully I can push on now and stay injury-free and help the team get as many points as we can."

LFC Women return to Prenton Park this Sunday as they host Coventry United in a game you can watch live on LFCTV at 2pm GMT.

Hodson insists the team are working hard for each other and remains confident their next win is just around the corner under interim boss Amber Whiteley.

"We just need to keep going," she added.

"We are building and we've got a really good foundation here now. We are building something really good with Amber and it's just about keeping going and putting the things that she is telling us to do to practice, which I feel we are doing on the pitch.

"We kept the ball really well and we dominated large parts of the game and it was just frustrating we couldn't get the three points."