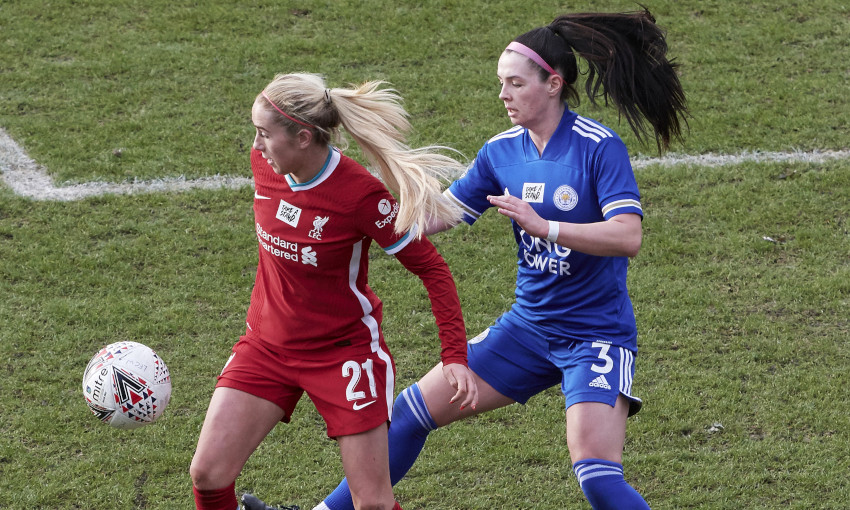 Missy Bo Kearns had provided a 10th-minute opener for the Reds, who were led by interim manager Amber Whiteley following the departure of Vicky Jepson earlier this week.

Natasha Flint restored parity for Leicester with a penalty shortly before the interval, however, and Liverpool then had to play the entire second half with 10 players after Melissa Lawley was sent off within seconds of her introduction.

The home side held firm for much of the remainder but were denied anything to show for their efforts when Charlie Devlin rifled in from the edge of the box nine minutes from the end.

Both sides paid respects to the late Gerry Marsden with a period of applause as his iconic version of You’ll Never Walk Alone was played before kick-off.

There was a slick start to proceedings and Kearns had already drawn a save with a low shot from the right channel before Rachael Laws had to thwart the visitors in the fourth minute.

Paige Bailey-Gayle spotted a gap to thread a pass into a free Flint inside the box – but what seemed a likely goal was denied when Laws rushed from goal to block the prodded finish.

Instead, it was Liverpool who opened the scoring.

An outstanding combination created the goal as Amalie Thestrup made ground along the left flank and delivered a pinpoint cross to the middle of the Leicester box. Arriving at the perfect moment was Kearns, who guided a strike beyond Kirstie Levell.

Bailey-Gayle did force the Reds ‘keeper into a stop on 34 minutes; having cut into space off the right wing, the forward attempted an early effort from distance that was comfortably handled.

But Laws was unable to prevent the away team levelling from the penalty spot in the 42nd minute.

Remi Allen was judged to have been brought down in the Liverpool area as she surged at goal and Flint stepped up to slot her kick inside the right post.

Whiteley opted for a change during the interval that saw Lawley replace Thestrup and Rinsola Babajide move into a more central attacking position.

But a matter of seconds after the play restarted, Lawley was shown a straight red card for a challenge and the Reds had to regroup and rethink their strategy.

Leicester naturally enjoyed increased spells of possession and pressure in the aftermath of that dismissal, yet Laws was not called into action and Liverpool kept their opponents at arm’s length.

Bailey-Gayle did break into a shooting chance past the hour mark when she again came in from her right flank and swept a curler that drifted just wide of the far post.

Rachel Furness then entered the contest and the Reds belied their deficit in numbers by not only stifling Leicester but mounting a series of their own attacks.

The visitors might have grabbed the lead on 76 minutes as Bailey-Gayle pounced on a backpass and teed up Flint, whose hit was skewed wide with Laws off her goalline.

They did clinch victory five minutes later, though.

Devlin capitalised on a shooting opportunity to dispatch a clinical drive inside the left post from the edge of the penalty area, securing the points for her team, who therefore further extended their advantage over the Reds in the Championship standings.